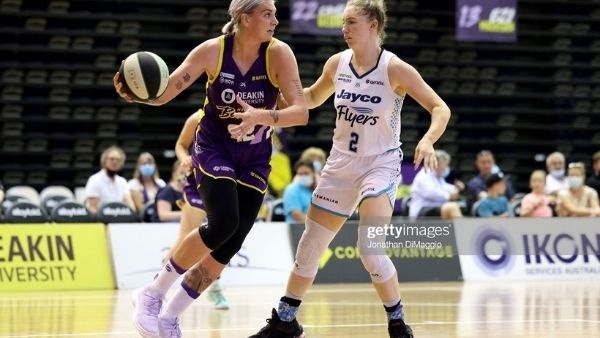 It's been an action-packed two weeks of Basketball after a covid induced hiatus with nail biters, overtime and a 19 point comeback all on the cards for rounds seven and eight.

As the WNBL ladder starts to take shape with the Perth Lynx finally getting its campaign underway, we present the second edition of the WNBL power rankings.

Despite their most recent 66-68 loss to the Townsville Fire, the Boomers still rank at the top of the power rankings.

Penina Davidson got the start over Ezi Magbegor (Seattle Storm) against Southside. Ezi came out of COVID protocols and was slated as the sixth person off the bench.

Despite the change in the lineup, the Boomers were able to pull out the win with a big showing by Ezi and Cayla George.

Their matchup against the Lynx was destined to be a battle. Ezi was back in the lineup but Davidson was out.

In their lone Round 8 loss against the Fire, the Boomers had a comfortable lead until Townsville caught on fire, no pun intended and exploded on offence. Melbourne had no answer on defence to stop Townsville’s momentum and couldn’t get their offense going.

With their overall showing on the court and the way the Boomers were able to outlast two fierce opponents, they stand at the top with a threat creeping over their shoulders.

The Perth Lynx have continued their fine form coming into the season, with a  4-2 record with the losses against contenders in the Lightning and Boomers.

The Lynx are really beyond the arc with the likes of Import Marina Mabrey (Dallas Wings), Captain Darcee Garbin and Lauren  Scherf all proving to be strong beyond the arc.

It hasn’t come without a scare with the Lynx just holding on to defeat the Sydney Uni Flames by just five points. Although that’s what the best teams do, they find a way to win which is exactly what the Lynx did against the Flames.

It’s been a while between drinks for the Lightning with the team having a long break in between matches, having only played one match since the last time we put out the power rankings but it was a dominant win, which keeps them firmly in the top three of the power rankings.

Adelaide showed that no amount of rest could keep them down, with a 25 point win over the struggling Sydney Uni Flames.

Stephanie Talbot was once again dominant for the Lightning, having 19 points, seven rebounds and five assists in the match.

The Lightning was extremely strong on the fast break having 17 points coming out of fast breaks compared to Sydney’s one.

The Lightning has a chance to stamp dominance on the game with two games against the Capitals and the Fire coming up this week.

The last time we put out power rankings, the Fire were standing firmly at number five. They started off the season well and then depleted a bit.

In their two games in Round 8, they redeemed themselves enough to move up one spot to four. Townsville defeated the Bendigo Spirit 77-67. They came back from being down 16 to the Boomers to grab the 68-66 win in upset fashion.

They face the tough task of playing Adelaide and Melbourne in Round 9. They’re one win away from climbing the rankings. If their momentum keeps up, their push to the top three is just a step away.

The Flyers performances over the last few games have been disappointing but in a different sense to what Canberra’s were. In both the matches against the Lynx and the Boomers they were in both of those games but let them both slip.

Flyers were in control of the game against the Boomers at multiple stages during the game but Boomers were and with a combined margin of seven, it’s a disappointing title defence for the Flyers.

It was a similar story in the overtime game against the Lynx with the Flyers leading at every change except the one that counted the most and by the time the end of the last quarter came, Perth had all the momentum with the Flyers only two points during the overtime period.

Sara Blicavs dominated the game against the Lynx having scored 21 points but missed the match against the Boomers. Bec Cole had a great round seven having a combined score of 30 in the two matches.

Although the Flyers have been hit hard with Covid with many stars having contracted the virus including Opals Captain Jenna O’Hea who missed a few games while recovering.

The Flyers didn’t feature in round eight due to both games getting postponed but will be looking to bounce back against the Perth Lynx on Thursday night.

It’s been a disappointing past few rounds for the capitals after two big losses to the Lynx with a combined margin of 48 points.

Although they were two massive losses Kelsey Griffin and Brittney Sykes were both instrumental for the Capitals in those two losses. With Griffin having a combined 32 points while Sykes had a combined score of 26.

Although they were able to turn it around in the last match with a 34 point win over the struggling Bendigo Spirit.

Jade Melbourne dominated that match with 19 points, two assists and five rebounds with Griffin and Sykes also making an impact.

The high hopes coming into the season for the Spirit continues to dwindle to a distant memory. They hadn’t played a game since December 22 due to COVID which wouldn’t help their case in trying to redeem their season.

The season obviously isn’t over and there is still technically time for Bendigo to make a comeback but those odds are bleak.

Alex Wilson and Demi Skinner contributed greatly in points with 15 and 12 respectively but the stars of the game were without a doubt, Megan McKay and Anneli Maley.

McKay finished with a double-double of 13 points and 13 rebounds but Maley stole the show. She burst onto the scene with 18 points and 24 rebounds. Yes, 24! Maley is a rebounding machine so it’s not really a shock but putting up 24 at only 189 cm against taller opponents is a feat of its own.

Take everything about the hope of redemption for Round 8 and throw it away. Bendigo was absolutely blown off the court by the Capitals. It wasn’t even a close game. Despite McKay recording 11 points and Maley recording yet another double-double with 15 points and 11 rebounds in a 60-94 loss. The Capitals were too explosive on both offence and defence and shut down the Spirit with ease from the very beginning.

The Flames continue to stay at the very bottom of the power rankings. Similarly to Bendigo, Round 8 consisted of the first two games they’ve played since December 22. Rust was to be expected when you haven’t played for almost a month.

Changes were also made in the time between December 22 and their first game back against Adelaide on January 20.

Chelsea Dungee (Dallas Wings) was cut on December 24 and the Flames announced the signing of Rennia Davis (Minnesota Lynx) shortly after. Unfortunately, Flames fans, also Minnesota Lynx and Tennesee Volunteer fans, had to wait for Davis to make herdebut.

The aforementioned rust was evident in their 52-77 loss to Adelaide. Although it was probably an expected loss to a top team in Adelaide a few players hit double-digit scoring.

Shyla Heal was everywhere in that game, recording 13 points, 7 rebounds, and 2 steals despite an abysmal 23.5% shooting night. Lauren Mansfield recorded 10 points and 5 rebounds on a poor shooting outing of 16.7%. Morgan Yaeger was their star player, recording 10 points on 36.4% shooting.

In their game against Perth, the tables seemed to have turned and it looked like they were going to pull off an upset. Sydney’s first win of the season was in sight. Their offense was flowing, they played their best defensive game of the season, but it wasn’t enough. Sydney dropped the game 81-86 off a late comeback from Perth.

Flames fans shouldn’t be upset over the loss to Perth. Instead, they should be excited about what the future of this season holds.

Davis absolutely shined and was the key to helping the Flames maintain the lead for the majority of the game and compete with some of the best players in the league. She finished with a double-double of 21 points and 13 rebounds. If that doesn’t make fans excited despite their record, who knows what will.