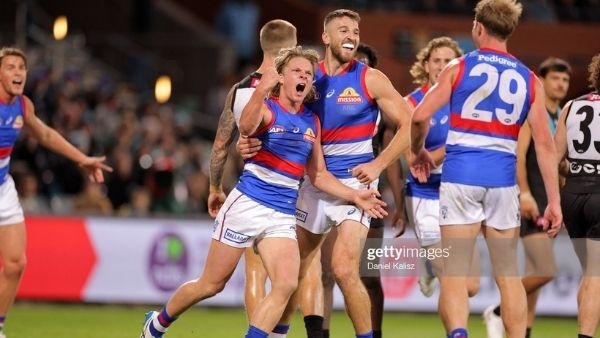 It was a rollercoaster season for the Western Bulldogs in 2021 that ended in a grand final loss to the Demons, the Bulldogs will go into the 2022 season ready to go that one step further and contended for that premiership cup.

After falling over at the final hurdle in 2021, the Bulldogs will come into 2022 trying to go that one step further. Over the off-season, the Bulldogs brought in former Hawk Tim O'Brien to join the defensive outfit then looked to the draft where they brought in a number of exciting players including Father-Son selections Sam Darcy and Arthur Jones.

In the practice matches, Bulldogs fell short to both Essendon and Brisbane by six points respectively but there were lots of positive signs. Aaron Naughton booted a combined five goals across both practice matches.

An issue with the Bulldogs last season, especially while they were in that second half of the season slump was the delivery into inside 50. Players would opt to bomb it long inside 50 or go for goal just inside fifty which would cause either a turnover or a behind.

With Josh Bruce for a large part of the season as he recovers from an ACL and Jamarra Ugle -Hagan still developing the load with most likely end up on Aaron Naughton to be the Bulldogs' sole key target.

The Bulldogs will need to learn to lower the eyes and hit up a small forward, which Naughton is on the up, he won’t always be the right option when going inside 50.

After a hot start to the 2021 season remaining undefeated until the Round Seven clash against Richmond the Bulldogs and two 100 point margins going their way, the Bulldogs put themselves in the conversation for the premiership.

While the hot streak continued the Bulldogs started losing key players to injury with Josh Dunkley and Adam Treloar missing large chunks of the season due to their respective injuries.

The run home wasn’t great, with the Bulldogs losing three out of their last five matches to be knocked out of the top four by percentage. The Bulldogs finals run will be one to be remembered, making it all the way to the Grand Final after defeating Essendon, Brisbane and Port Adelaide all away from home.

Although Melbourne was just too strong on the day with a 45 minute period of football the Bulldogs would rather forget.

The Bulldogs Strength is its midfield, with the addition of Adam Treloar just allowed for that more versatility in the middle with many of the Bulldogs midfielders spending time up forward for some parts of the season.

The fact that they’ve got such depth in their starting midfield alone means that if there is a player that gets tagged out of the match or someone is just having an off game there are other players that can step up.

Not only are they good around the centre but are able to hit the scoreboard which was shown especially during the finals series, with Bailey Smith having kicked eight goals in the finals series, four of them coming from the preliminary final win against Port Adelaide.

The Bulldogs' weakness at the moment would be the defence, Alex Keath has probably been one of the most important players in the Bulldogs lineup over the last couple of seasons and with the Preliminary final against the Power being the expectation the Bulldogs struggled to contain those tall forwards.

Peter Wright kicked seven against the Bulldogs in round 21, which was one of the matches that Keath was out of the side. With Easton Wood retiring as well that’s going to be another void that the Bulldogs will need to fill that void.

Tim O'Brien was brought in to bolster the Bulldogs defence but is set to miss the start of the season due to a hamstring injury.

Josh Schache spent some time down back in 2021 and played a defensive forward role on Port Adelaide star Aliir Aliir in the preliminary final, so that may be an option that Luke Beveridge may explore.

Arthur Jones was selected with pick 43 in last year's draft, hailing from Claremont in Western Australia.

Jones is a versatile player being able to play as an outside mid, on the wing or up forward and has shown glimpses in practice matches and in his 2021 campaign for Western Australia and Claremont that he’s got that polish and ability to be a real asset to the Bulldogs side.

The Bulldogs have the team and potential to really contend for a premiership but there are a few areas of concern due to key players going down with injury such as Josh Bruce and gaps that were shown in that Grand Final loss against the Demons.

There is a lot of promise as shown throughout 2021, with the likes of Marcus Bontempelli and Bailey Smith going to a new level and Bailey Dale becoming a key to the Bulldogs across half-back and will all look to continue that form.

While there are concerns there are a lot of positives and they will be right up there contending for their first premiership since 2016.