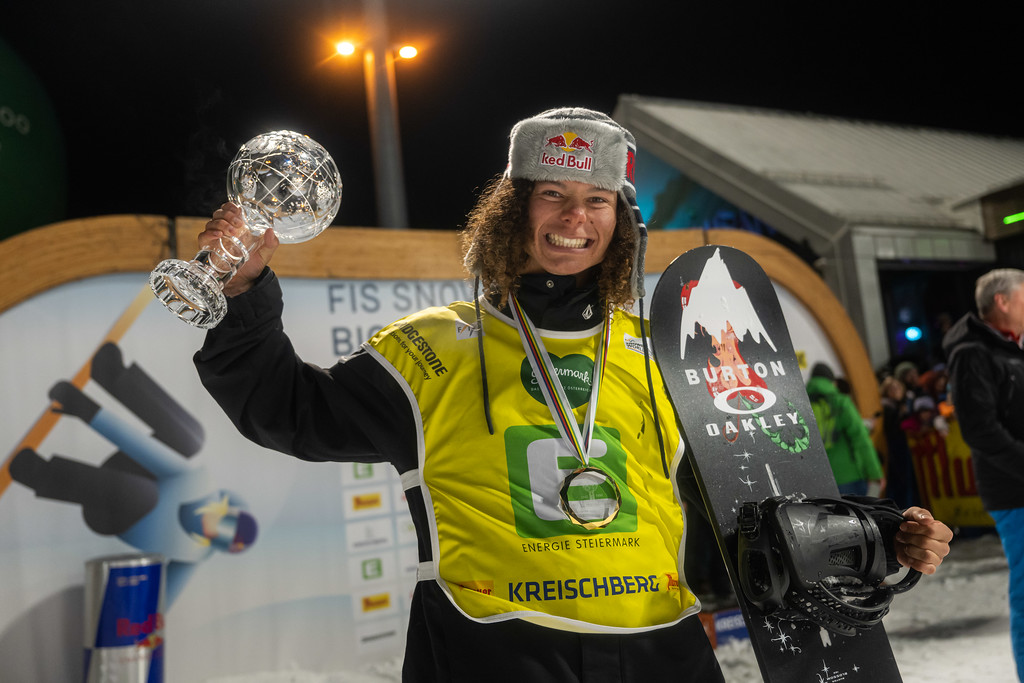 Aussie wunderkind Valentino Guseli made an impression at the Beijing Olympics 12 months ago, but his growth has continued since that moment.

Aussie wunderkind Valentino Guseli made an impression at the Beijing Olympics 12 months ago, but his growth has continued since that moment.

Guseli drew attention at Beijing 2022, where he finished sixth in the final of the Men's Snowboard Halfpipe. He was the only competitor to land every run in that final, drawing praise across the board.

The 17-year-old carried his form through the rest of last season, with his inaugural World Cup podium in the Snowboard Slopestyle, showing off his versatility.

It was just the beginning for Guseli, who spoke to Edge of the Crowd at the end of last season.

For Guseli, the Olympics may have been the first stepping stone, but it was still an incredible moment of achievement on a personal level.

"It was awesome," the snowboarder explained.

"I think its every athlete’s dream to go [to the Olympics], and qualifying wasn’t the straightest line ever.

"There were some curves and it took some turns, but we got there in the end, and I was super happy to put all my runs down at the final, and I just had a good time shredding with all the homies."

Despite finding the Olympics a dream moment, Guseli used the major competition as a pivot point in his debut season.

"Coming from the Olympics, you definitely have a confidence that you can’t really get from anything else, so, going into the rest of my season, I cut away from the [half] pipe a little bit, and decided to do some slope [style] World Cups," he said.

"The first one I did, I got second which I was pretty happy about - that was my first World Cup podium, so I was super stoked to get that.

"Then I had a couple more, and on the last one, I got third again, so I was just having a ball and it was really nice to ride some Slopestyle again. I’ve always loved Slopestyle."

It's not just the Halfpipe and the Slopestyle for Guseli, who had his eyes set on a bigger prize just weeks after Beijing 2022.

"The ideal would be to win in halfpipe, Slopestyle and big air, which I’m going to try and qualify for.

"I really want to try and show that it's possible to be competitive in all three in men’s snowboarding. I feel like snowboarding used to be like that, but now we’re drifting away from it.

"I just want to show that snowboarding can be done in all disciplines competitively."

In the first full season since the Olympics, it's fair to say that Guseli has shown that he has the talent, and the ability, to be competitive in all three disciplines.

In less than two seasons, he has a World Cup podium in the Slopestyle, a berth in an Olympic final in the Halfpipe, and as of the weekend, a Crystal Globe for the overall World Cup win in the Big Air.

Guseli sealed the Crystal Globe with a fourth place finish in Kreischberg. He becomes the first Australian to take the award and was taking in the moment when he spoke at the award ceremony.

“I knew coming here it was a possibility to get the Globe and I wanted to make it so bad, because it was a good opportunity to get this beautiful thing that is definitely going in my pool room," the young Australian said with a smile.

“But I knew I had to beat Chris [Corning] who, out of anyone in the field, is probably the person you least want to have to beat, because he’s just so good and consistent.

"I think he’s won seven [Crystal Globes]. So, I’m super happy. It was a battle and I landed my stuff. Couldn’t really ask for much more.”

The win is not the end of the season for Guseli, who will now compete in the Slopestyle and Halfpipe World Cup races.