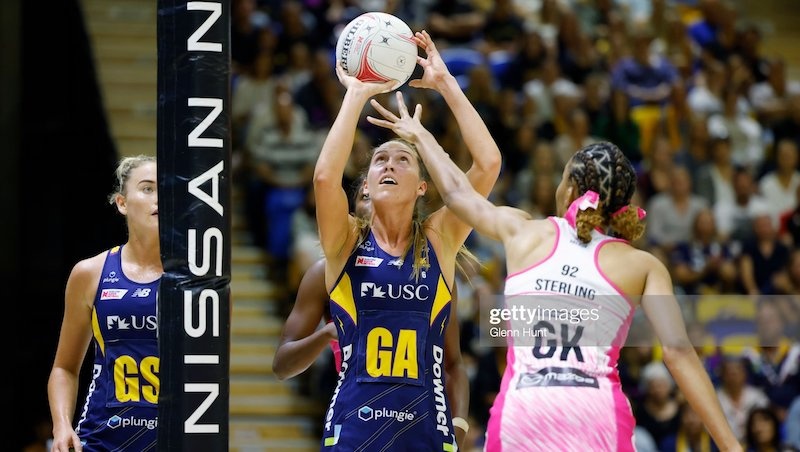 The Adelaide Thunderbirds have snapped a five game losing streak with a win on the road, taking down the Sunshine Coast Lightning by seven on Saturday night, 51-44.

It was a defensive game from both sides, with the likes of Kate Walsh and Tara Hinchliffe picking up three and four gains respectively. Though, the Thunderbirds' trio in Shamera Sterling (11 gains), Latanya Wilson (seven gains) and Matilda Garrett (four gains) were able to create more opportunities for the Thunderbirds' attack.

This was also matched by the accuracy of the Thunderbirds' shooters, which was a key difference scoring at 92 per cent, compared to the Lightnings' 65 per cent conversion. The supershot was especially telling, with Adelaide scoring three from three and Sunshine Coast only going four from 15.

Incredibly, the Thunderbirds had more penalties (85-45), more turnovers (30-21), and less shots on goal (52-64), but still managed to win by seven. There's certainly plenty for the side to keep working on, but today they found a way to get the job done.

Speaking after the loss, Lightning coach Kylee Byrne was disappointed with how her side played, especially in attack, on Saturday night.

"I think the biggest thing from that game, the biggest takeaway is just individual accountability and I think we had 12 more attempts at goal than they did and in the end, if you can't convert goals you can't win games like that.

"They're such a quality opposition, they've been looking for a win now for a few weeks, and they certainly brought that intensity out there tonight, and we just didn't match it early on - we left that run a bit too late."

There were challenges, and some reasons for the disjointed forward half, but the individual performances and goal shooting percentages were too low for Byrne's liking, regardless of the lack of training the group have had together this past week.

"Obviously not having Cara (Koenen) all week, and she was going to come up against a quality player like Shamera (Sterling) as well and get her timing straight from the start was a big ask, but we knew that she certainly has it in her. She grew as the game went on and Cars (Cara Koenen) will be better next week, but most importantly I was just so happy with the defence's.

"The amount of ball that we turned over - I think it was nine in the first quarter alone that we gained - so they did everything that they possibly could to keep us in that game, and I couldn't actually be happier with the effort that they put in."

Coming into the game, the Lightning welcomed the return of their Diamond goal shooter Cara Koenen, who missed last week's 28 point loss to the Giants under heath and safety protocols. The Thunderbirds, also looking to bounce back from a nine point loss to the Fever, had their full squad together, and healthy, for a second week in a row.

It was a fairly even start to the contest at USC Stadium, the Thunderbirds taking an early advantage, before the Lightning returned serve.

Both defences were active early. In the opening quarter, the Lightning trio picked up two intercepts each, while Sterling and Garrett were in the action for the Thunderbirds with one each.

The Lightning looked to Reilley Batcheldor in the Power 5, but the intimidating hold of Sterling and her long reach over the shot put Batcheldor off target. Sterling followed up with two more blocks on shots, and was key to the Thunderbirds taking a three point lead into quarter time.

It was back to plan A for the Lightning, with Koenen returning at goal shooter. However, the Lightning struggled to implement the fast-paced netball they've played in their wins earlier this year.

Tayla Williams entered the court for the Thunderbirds at centre during the second quarter and was able to impact, disrupting the Lightnings' transitions with three deflections, feeding nicely for 10 goal assists and only making one general play turnover.

There were plenty of opportunities for the sides in the second quarter with 15 turnovers between them, but the Thunderbirds were able to convert their chances more often for an eight point lead at the main break.

Annie Miller was injected into the midcourt in the third quarter for the Lightning, Laura Scherian moving into centre and the added pace through the middle had immediate impact. It resulted in a run of five for the Lightning, the Thunderbirds looking tired and making errors left, right and centre.

At the end of the third, the most penalised team in the competition, the Thunderbirds, were already at 67 penalties, compared to the Lightnings' 27.

Inaccuracy became more of an issue as the game went on, and the Lightnings' supershots made things worse instead of better at the end of the third, with Steph Wood and Batcheldor missing two each.

Koenen returned again, but Batcheldor was pushed out to goal attack to start the last quarter, with a deficit of eight the task for the final 15 minutes.

The gap narrowed to as few as four points, but the Thunderbirds were able to settle and capitalise on turnovers and missed shots from their opposition.

With it all on the line, Wood returned to the court at goal attack and lined up for a supershot. She missed, the rebound followed up by Wilson, backed up by Hannah Petty and they went down the other end for a Thunderbird goal.

It was a comfortable finish for the Thunderbirds, a slightly calmer final minutes than the heart-stopper earlier in the year that started the losing streak.

Batcheldor did finish the match with one final supershot to reduce the margin to seven.

In her 50th match, Garrett finished with an intercept and three rebounds in 30 minutes on court as she shared the goal defence bib with Wilson.

But it was again the stellar work of Sterling that won player of the match honours for her 11 gains.

"Shamera always brings her A-game and she's the world's best defender for a reason," Byrne said of the opposition.

"And I also think that combination, though, with Latty Wilson out the front, I thought Latty was really dangerous tonight and she read where we were placing the ball and that's an area we need to be better on - we were just too predictable in that and she read it perfectly.

"So, I think that combination tonight for Thunderbirds really stepped up."

Even at half-time, Adelaide coach Tania Obst was pleased (as she often is) with her defender's efforts when asked about their performance in the opening half on the broadcast.

"I think that our defence has been pretty exceptional, with the amount of ball that they've been able to give us," Obst said.

"And just in the forward line, we've probably just needed to settle a little bit when we did have ball in hand and I thought we did do that in the second quarter. I think we were a bit excited early and trying to keep up with things we didn't need to."

Byrne also spoke about her side's struggles converting on Saturday, both from their own centre pass and the turnover ball.

"First and foremost, though, you've got to convert your own centre passes and I think in the first quarter we were sitting under 50 per cent.

"So, you're always going to be behind the 8-ball then, but when your defence's, they give you the ball, you've got to convert those as well and normally that'll push out a lead or that'll be a little bonus on top, but it's still about the foundation and converting your own."

Across the game, the Lightning scored just four goals from their 11 gains, and managed to push up the centre pass to goal conversion to 57 per cent, below the Thunderbirds efforts, though.

The loss equalises the bottom half of the table, making it a difficult task for the Lightning to try and make finals from here, but they've still got hope.

"So we're very, very conscious of that and the situation a game like that puts us under now, but yeah we'll go away and we'll be better, we've got a big task ahead of us next week with Fever, but we're up for it."

The Sunshine Coast Lightning will need to regroup before they host the West Coast Fever next Saturday, while the Adelaide Thunderbirds must back up the win with a trip to Sydney where they'll meet the NSW Swifts.