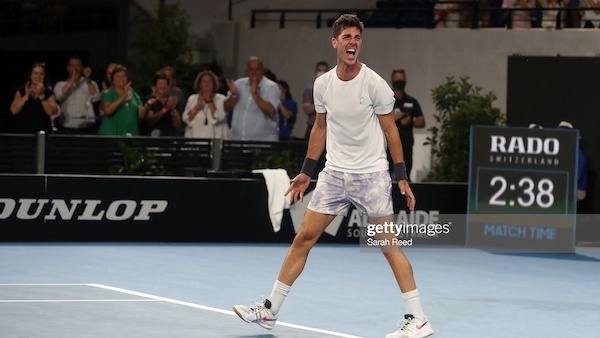 Thanasi Kokkinakis has come from a set down to secure his first ATP Tour title, the Adelaide International 2, with a 6-7 7-6 6-3 win against Arthur Rinderknech.

After a marathon three-set contest against fourth seed Marin Cilic that finished after midnight, Kokkinakis returned to Centre Court at the Drive on Saturday evening for the Adelaide International 2 Final.

His opponent, the World Number 58, had come through the first two rounds with three-set matches but cleaned up in the quarter and semi-finals to convincingly take his place in the final.

It was an even opening set in Adelaide, neither player giving the other anything to work with, instead serving bullets including eight Aces for Kokkinakis and six for Rinderknech.

Serving at 68 per cent, Kokkinakis won 88 per cent of his first-serve points and confidently held his service games to take the set to six-all.

In the tie break, it was still difficult to split the pair. An incredible net rally gave Kokkinakis a set point, but he was unable to secure it and Rinderknech brought the contest back on his terms.

He closed out the set, helped by an error off the racquet of Kokkinakis and put the Aussie on the back foot.

Kokkinakis started the second set with aggression, holding easily and showing exactly why he is in the final - the man doesn't give up.

In similar fashion to the opening set, the pair served impressively, Rinderknech sending down six thunderous Aces, while Kokkinakis secured 81 per cent of his first-serve points.

The set was again forced to a tie break, as neither player could win multiple points off the other's service games.

A stellar off forehand gave Kokkinakis the two mini-breaks in the second set tie break. He lost the first after a tricky net shot, which fell low and short over the net off a Rinderknech recovery forehand.

Rinderknech sent a couple of nice second serves down, but Kokkinakis still had one mini-break and finished the set with an unplayable serve to level the match at a set all.

With the home crowd right behind him, Kokkinakis sealed the first break in 24 games and 128 minutes of play, an incredible chase to get a massive serve and strong positioning in the rally and he converted the break point chance.

The frustration of falling down a break got to Rinderknech, who argued with the umpire as Kokkinakis stayed level-headed and secured his service game to consolidate.

While Rinderknech held serve, it wasn't without a challenge from Kokkinakis, who took two points off the Frenchman.

He backed it up with a confident service game to love, to keep his lead in the third set.

Rinderknech's serves were back at their best, as he nailed several in a row to hold. At 4-3, Kokkinakis hit the edges of the court, running Rinderknech from one side to the other to keep pushing for the lead.

The first signs of real emotion - other than getting the crowd involved - came from Kokkinakis after he held and realised he was one game away from his maiden ATP Tour title.

The emotion got the better of Rinderknech, who hit another long forehand brought up three Championship Points for Kokkinakis.

One was saved by the Frenchman, with attacking forehands running Kokkinakis around the court.

Finally, a long forehand by Rinderknech gave Kokkinakis his maiden ATP Tour title, in his home tournament in Adelaide.

"I wouldn't want to win my first title anywhere else," Kokkinakis said after accepting the trophy.

It was an emotional win for the Australian, who has overcome injury-plagued years on tour and will surely celebrate the best result of his career well into the night before his attention turns to Melbourne Park.

"To my family, my coaches, friends, everyone here, what a ride it's been," he said.

"You guys have seen me at my lowest lows and obviously now my highest high, it's been a serious journey - I'm hoping this is just the beginning and I'll worry about next week, next week but for now, man I'm so happy."

The Australian Open begins on January 17, Kokkinakis will meet Yannick Hanfmann of Germany in the First Round on Monday, while Rinderknech faces Australia's Alexei Popyrin on Tuesday.