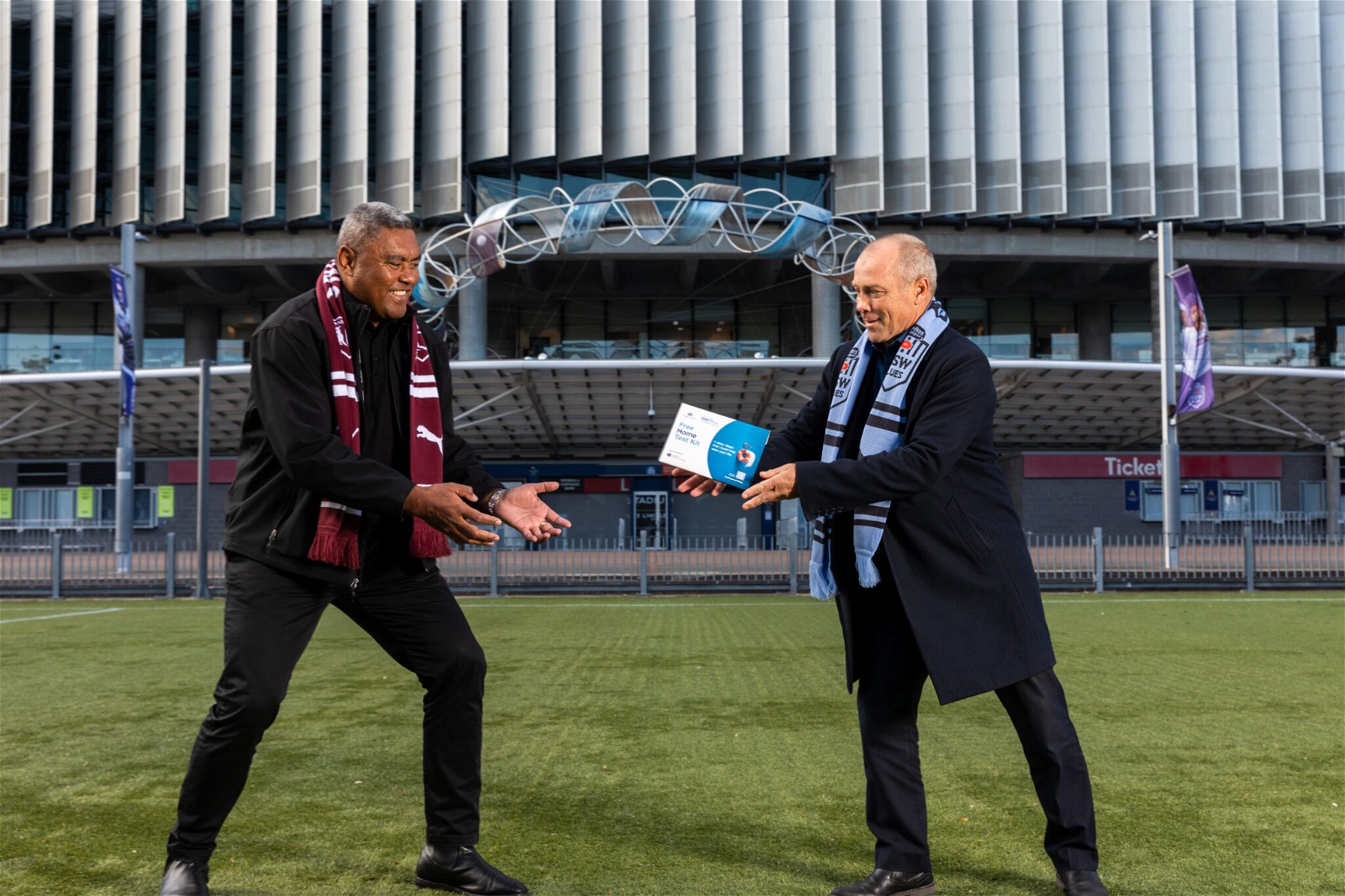 During 2022’s State of Origin Series, which kicks off in Sydney tonight, Australians are being urged to join the battle against bowel cancer by taking a half-time toilet break and doing a test.

Recent 2018-19 statistics show Queensland recorded more bowel screening tests than NSW (QLD 41.6% vs. NSW 40.5%), scoring an early win over their rivals; however, both states are below Australia’s 43.5% national participation rate.

Petero Civoniceva says we’re all on the same team regarding the fight against bowel cancer.

“When it comes to Origin time, it’s not often the blue and maroon states see eye to eye, but in the case of bowel cancer, we’re happy to work together to encourage more Aussies to take the test,” he said.

Geoff Toovey says that the bowel cancer test is easy and it’s the right call for Australians to get involved.

“The National Bowel Cancer Screening test is simple and takes less than a couple of minutes – much quicker than Petero can run the length of a footy field these days,” he said.

“There’s no rivalry when it comes to bowel cancer, Australia’s second biggest cancer killer – we all want to beat it. So why wouldn’t you want to give yourself peace of mind by taking a test that is simple, easy and free?”

According to The Australian Institute of Health and Welfare, South Australia and Tasmania are leading the charge for bowel cancer screening rates at 48.9%, while the Northern Territory (30.6%) is lagging behind.

Professor Tanya Buchanan, Cancer Council’s CEO, says being on the ball with bowel cancer screening could save lives.

“Every year, around 15,000 new cases of bowel cancer are diagnosed in Australia, and we know that 90% of those could be successfully treated if caught early,” she said.

“Currently, only 43.5% of eligible Australians do their free bowel cancer screening test and for men, it is even lower at 41.3%. That’s why we’re launching a national campaign with the Australian Government calling for Australians to Get2It and do the test.”

Mark Butler, the Minister for Health, says we need to increase bowel cancer screening to move forward and ensure there are no underdogs.

“If we can increase screening participation rates and help to detect bowel cancer early, we can save lives,” he said.

“We know if participation reaches 60%, 84,000 lives could be saved by 2040 – that’s around as many people as will be in Accor Stadium on Wednesday night.

“We have partnered with Cancer Council and the NRL to help us reach people who screen at lower rates, including men in regional and remote areas.

“Nothing captures [the] attention of NRL fans quite like State of Origin. That’s why the Australian Government is excited to work with the experts in cancer prevention and the experts in footy to promote bowel cancer screening and ultimately save lives through Aussies’ love for sport.”

While the notion that defence wins Origin matches is hotly debated, we can all agree that defending against bowel cancer will make every Aussie a winner.