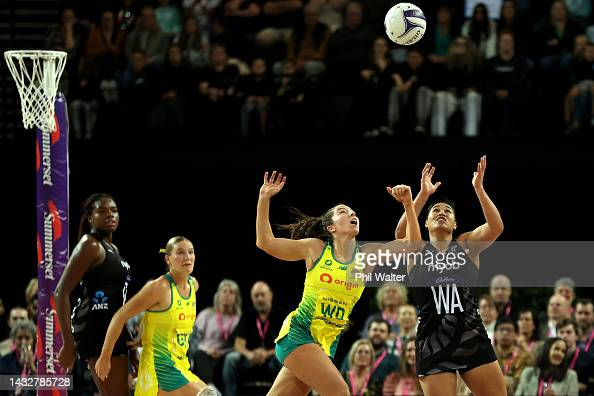 It was an electric first quarter that set the Silver Ferns up for a win against the Diamonds in Auckland.

It was an electric first quarter that set the Silver Ferns up for a win against the Diamonds in Auckland.

Currently held by the New Zealand Silver Ferns, the Constellation Cup is trans-Tasman rivalry at its finest. Since its inception in 2010, the Australian Diamonds emerged victorious nine times, breaking their eight-year streak last year.

This was the Diamonds' first outing since the Commonwealth Games, with the Silver Ferns recently playing a two-game tournament against a depleted Jamaican side. Despite the issues surrounding the event, it gave the Ferns’ coaching team the chance to try out some new combinations ahead of the Con Cup.

Just before the first whistle, the Australian Men took on New Zealand Men in the first-ever televised international men’s netball match. Australia dominated in the 64-48 match. The two teams will continue to play before the Constellation Cup matches between the Silver Ferns and Diamonds.

The Diamonds' team list was missing three from the original Constellation Cup squad, Gretel Bueta who had recently announced her pregnancy, Maddy Proud and Sophie Dwyer. Sophie Garbin was named as Bueta’s replacement earlier in the week, making the team’s starting seven for the game.

Giant’s Amy Parmenter made her debut, appearing in the starting seven at wing defence.  Ruby Bakewell-Doran was also named in the team, waiting on the bench to step onto court as a Diamond for the first time.

It was a smooth first goal for the Silver Ferns, made by the budding star that is Grace Nweke. Throughout her 60 minutes on court, she sunk 40 of the team's 56 goals, with a 95 per cent success rate.

Nweke and Ekenasio’s growing connection was on show, with some room for improvement alongside some brilliant plays. 10 minutes down and the pair had a seven-goal run to their names, putting them up five. As the clock wound down, the Silver Ferns continued on their streak, bringing the difference up to nine goals.

After the siren, Ekenasio made her fifth shot of the game, closing the first quarter 20-9. This was thanks to the work of wing attack Peta Toeava and centre Whitney Souness, who ended the game with 25 and 13 goal assists respectively.

Cara Koenen made the first goal of the second quarter, kicking off a steady flow from the green and gold. When the ball got to her throughout her 49 minutes on court, she was putting them through, making 21 of her 22 attempts.

The Silver Ferns were also remaining consistent, maintaining their lead throughout. Six minutes in and the Ferns had the first chance at breaking the flow, thanks to some work from the defensive end. On the bench, Dame Noeline Taurua looked relaxed, audibly marvelling at her team as they played.

The second positional change of the night came in the Diamonds centre, with Kate Moloney off for Jaimie-Lee Price. This was just the start of the Diamonds' switch-ups for the night, with Coach Stacey Marinkovich trying out combinations.

A late change in the quarter came in the Diamonds' attacking end, with Kiera Austin replacing Steph Wood at goal attack. The Diamonds had managed to keep the Silver Ferns at bay, finishing the quarter with an eight-point deficit. For the quarter they lead 14-11, hinting at a comeback.

The third quarter saw the Diamonds start crawling their way back. Despite the 13-11 quarter, the Ferns were still out of reach. With a six-point lead, all they needed to do was stay consistent. If they could continue holding off the Diamonds, the win was theirs.

But at the start of the fourth quarter, the Ferns weren’t just keeping the Diamonds at bay. A four-goal run from the home team was sealing the deal as time was going against the Diamonds.

"Obviously, we wanted to hit that last quarter, we were confident in our fitness, we know that we can run our game strongly, but it's a connection game, it's a team thing.

"We needed to get that balance right and New Zealand certainly came out firing. We had our moments, I think we got two really early in the quarter but then gave it straight back.

"It's not that we weren't getting some opportunities, but we didn't capitalise on them either."

Another change came, with Steph Wood at goal attack and Sophie Garbin at goal shooter, with just over ten minutes to go. Soon after, Phoenix Karaka was taken off the court due to a blood injury, bringing Kayla Johnson on as goal keeper. This forced change was the only one for the Silver Ferns in the entire 60 minutes.

Five minutes to go and it was all over for the Diamonds. With a nine-point lead, they were only playing for pride now. Although the Diamonds kept a close final quarter (12-14), it was the Silver Fern's domination in the first quarter that set them up for success.

Despite getting as close as three points down in the third quarter, the Australian Diamonds walked away eight points behind the end of the match.

"We didn't start particularly well, and I think there was certainly element of our game that wasn't our typical behaviours out on court.

"I think we can certainly rectify that, I think that's more a mindset and switching over and getting those behaviours right. Obviously haven't played New Zealand in a while so I thought it was adapting to the offline defence and just that style of play.

"I thought we were slow to start but then I think we started to get some confidence and get the momentum. We had some good quarters out there. Hit and miss in some areas, but still a lot to take. Our group is very good at learning.

"We gave them too much momentum early on. We pulled it back well, and we started to put some pressure on, but then there was some moments where we could've just applied a little bit more."

This Sunday the teams will play in front of a sold-out Tauranga crowd before heading across the ditch to play two games in Australia.