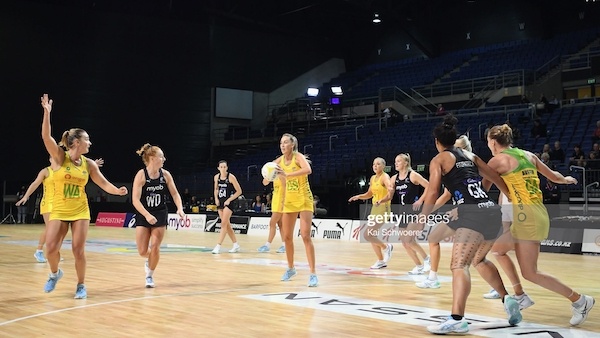 Ahead of the Quad Series this weekend,Edge of the Crowdtakes a look at who they think will feature in the Australian Diamonds' starting seven.

Australia is in camp in London, working away in the gym and out on court to prepare for the Quad Series against England, New Zealand and South Africa which begins this weekend.

There is incredible flexibility in the squad of 15 Australians, but with a travelling group of this size and quality, the starting seven is less obvious.

It's a challenging call for the Australian coaches, who will have plenty of questions racing through their minds: do they go with Super Netball combinations? Preference experience? Blood debutants?

On the Sunshine Coast in October combinations were trialled against each other, but now they’ll be tested against the world’s best.

So who lines up for the Diamonds on Sunday morning? TheEdge of the Crowd's netball team has put their selectors hats on to pick the Diamonds' starting seven.

While she only has four Test caps to her name, Cara Koenen has been around the Diamonds’ squad for some time, first invited to train with the squad in 2019.

The Sunshine Coast Lightning shooter will be looking to cement her place under the post, and part of that will be working on combinations with players other than her Lightning teammate Steph Wood.

She had a player of the match performance in the Constellation Cup in March 2021 and thrived with the extra game time as she became the preferred shooting option from the second test.

Filling the shoes of Caitlin Bassett isn’t a simple role, however, the differences in style between the players will create more exciting combinations for Australia, and more havoc for the opposition.

Gretel Bueta was a massive loss to the Diamonds team in the Constellation Cup, with her ability to change up the play. Whether it's a layup or a fake pass, Bueta completely changes a shooting circle and not many defenders are able to combat her.

While the combination of Bueta and Koenen will be a very new one, it could possibly be one that takes the Diamonds into gold medal contention come the Commonwealth Games, with both of them playing a unique brand of netball from what is traditionally seen in these positions.

Bueta already has a strong connection with Diamonds' captain Liz Watson as well, and having the two together once again will be another massive tick for the Diamonds.

Liz Watson is back! The newly-appointed captain of the Diamonds will be raring to go on Sunday and will slot straight into the midcourt with Vixens teammate Kate Moloney.

She hasn’t played any netball since the Constellation Cup in March 2021, due to surgery to repair a navicular bone injury, but that won’t be a problem for the most experienced Australian in the squad.

With ample training under her belt, including lots of court time with the squad in October and through the week leading up to the Quad Series, there should be no issues with Watson jumping right back into things.

Her leadership out on court is the biggest reason why Watson is the first name placed on the whiteboard.

She brings much more than just her netball speed and skill, she brings experience and she’ll have everyone buying into every contest.

Kate Moloney only has 10 test caps to her name, but if her performance in the Constellation Cup is anything to go by she’ll be a valuable asset in the mid-court for the Diamonds in this series.

After being on the fringe of the Diamonds team for quite a few years, Moloney will be looking to cement herself into that Diamonds' mid-court.

With International netball contests being few and far between in the last two years, having the established partnership of Moloney in centre and Watson in wing attack will strengthen the Diamonds' side.

Moloney’s on-court leadership is another real asset, especially with such an inexperienced lineup. Having Moloney direct and provide encouragement to those around her will help instil that confidence in the rest of the team.

Returning to the Diamonds squad for the first time since the 2019 Constellation Cup, Brazill has hit the ground running and is a good chance of taking the wing defence bib and making it her own.

Brazill returns to the squad two years after tearing her ACL in an AFLW match in early 2020.

She is one of those players that if you give her an inch she’ll take it and run, as we saw in the 2019 Constellation Cup where she went toe-to-toe with Silver Ferns legend Laura Langman.

Having her unpredictability when lining up on an opponent will really make them second guess everything that they do, and help the Diamonds win back possession.

Although she only has eight international caps, Brazill looks at home in the Diamonds midcourt and the green and gold dress and will play a vital role this Quad Series.

As one of the most experienced players in the Diamonds’ squad, Weston should be the preferred goal defence choice to start in game one.

The Melbourne Vixens’ defender has been a regular starter for some time, with her fast closing speed and read on the game making her an expert interceptor across the transverse line.

Not only will her work in defence and on transition be on show, so too will her communication and leadership.

Her partnership with Bruce will also be something the Diamonds lean on heavily this series, as the pair has become the go-to defensive combination.

With new, young faces in the squad, the pressure will be on to keep performing, but that’ll only have Weston hunting more intercepts and chasing more loose passes.

She’s a rock in defence and the reigningLiz Ellis Diamond winner, and Courtney Bruces' presence in the defensive end makes it the most experienced section of the Diamonds' court.

Bruce was once again on fire during the Super Netball Season for the Fever having 97 gains, 97 deflections and 48 intercepts and will be looking to bring that form over to the Diamonds when they play their first match on Sunday.

She also has that leadership experience being the captain of the West Coast Fever and will be able to help guide the less experienced players when on the court.

The Diamonds Quad Series matches start on Sunday, when they take on trans-Tasman rivals the Silver Ferns at 3:15 am AEDT.