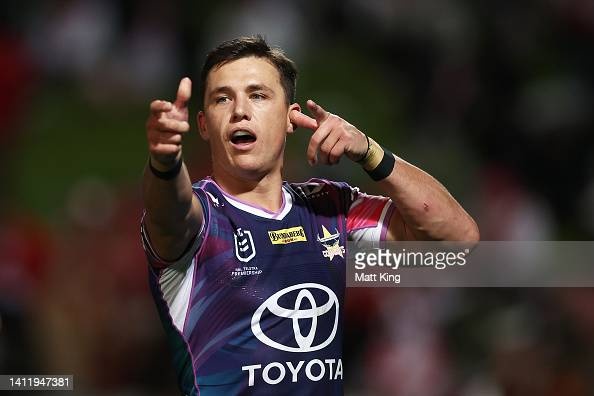 The North Queensland Cowboys had a stellar game this week against the Dragons, winning 34-8. Fullback Scott Drinkwater had a great game – scoring two tries, having a couple of assists and 100% tackle efficiency.

Drinkwater played a strong game from the start, with a quick, solid offload to Kyle Feldt, resulting in the night's first try. Just 2 minutes later, Drinkwater scored his own try with a solid run down the middle of the field, putting the Cowboys further ahead. His second try at 70 minutes was a great team play, with a quick offload from Valentine Holmes giving Drinkwater the chance to score.

Drinkwater had a few try and line break assists, helping his team win against the Dragons. He had 100% tackle efficiency and scored 170 run metres most of the night.

In the Bulldogs' 24-10 win over the depleted Knights on Sunday, 20-year-old rookie Jacob Kiraz showed some pizazz. He opened the scoring in the 7th minute. Jeremy Mashall-King went to the short side, and a silky tap-on pass from Braidon Burns sent Kiraz in to score in the right corner.

Kiraz's second try came just three minutes later, with this one being a winger-to-winger spectacular. Josh Addo-Carr came up with the ball off the back of a bomb from Matt Burton and sent up a cross-field kick for Kiraz to score.

He secured a hat trick in the 44th minute thanks to his Bulldogs teammates moving the ball from left to right without giving the Knights' defence time to intervene.

Kiraz racked up 59 post contact metres, three line breaks, seven tackle breaks and three offloads. He also had the most running metres in the match, with 259 metres from 21 runs. His impressive attacking effort didn't come at the cost of his defence, as he finished the game with 100% tackle efficiency.

The Raiders racked up their highest season score in their 36-24 win over the Titans. With the Raiders currently fighting for a spot in the top eight, Sebastian Chris contributed eight of the Raiders' crucial points.

Thanks to a flick offload from Hudson Young, Sebastian Chris scored his first try in the 51st minute. He strolled through in the 73rd minute for his second try, shrugging off the hands of multiple Titans players in the process.

Despite being shuffled back to the centres last week following a dominant period filling in for Luke Keary in the halves, Joseph Manu has continued to impress. He ran for 204 metres from 23 runs in the Roosters' 20-10 win over the Sea Eagles on Thursday night.

With the help of a quick pass from James Tedesco, Joseph Manu produced a right-foot step to clinch his 10th try for the season in the 28th minute.

Manu finished the game with 13 tackle breaks, which was by far the most of any player in the match. He also racked up 77 post contact metres and three offloads.

In the first half, Nick Cotric was instrumental in the Raiders' 36-24 win over the Titans.

Hudson Young's offloads proved to be a try-scoring weapon. Cotric's first try came off the back of an offload from Young, with the winger taking the low ball one-handed and scoring in the left corner. His second try came just six minutes later when he tricked the defence by powering to the line out of dummy half.

Cotric finished the game with 157 running metres from 15 runs, 52 post-contact metres, two line breaks and six tackle breaks. His defence was equally as impressive, with 100% tackle efficiency for the match.

The Bulldogs had a solid victory over the Knights this week, winning 24-10. Matt Burton had a great game, with some strong conversions, a significant penalty goal and a high tackle efficiency.

Burton made 3 out of 4 conversions of the night and easily cleared his penalty goal. He had some great assists, with the Bulldogs scoring tries off of his kick bombs twice, which was incredible. Burton had a tackle efficiency of 90.91%, proving his spot in this week's Team of the Week.

The Sharks put up a great fight this week against the Rabbitohs, taking the win 21-20. Halfback Nicho Hynes had a stellar game, scoring 9 points for his team. Hynes scored effortlessly 3 out of 3 conversions and easily cleared the penalty goal in the 31st minute. He had a strong kick 36 minutes it, with Ronaldo Mulitalo catching it incredibly to score a try.

The game went to golden point, with a high tackle from Rabbitohs player Tom Burgess getting him sent off, giving the Sharks a reset. This gave them the upper hand, with Hynes scoring a field goal to win the game.

The NSW Blues awarded Hynes NSW Player of the Round.

Junior Paulo and the Eels pulled off one of the upsets of the season, taking down the Penrith Panthers.

While only making 14 tackles, Paulo made up for it on the attack. With 12 hit-ups and 187 run metres, he proved to be unstoppable by the Penrith defence.

The Cowboys put together a solid defensive masterclass to keep the Dragons to only a single try this round. Reece Robson was one of the main pieces of this effort.

With 44 tackles, Robson shut down any attempts of Dragons attacks. Additionally, with 95 metres from dummy half runs, Robson played his part with the ball.

Despite his side's losing efforts, Tevita Tatola was one of the best players in the Souths/Sharks game.

With 172 run metres and 30 tackles, as well as a try, Tatola did his best to keep Souths in the running against Cronulla. While this was not enough, his effort still deserves recognition.

Another incredible effort from the Cowboys, Nanai continued his excellent first full season in the NRL.

With two tries and 146 run meters, Nanai has shown he has lived up to his hype as a rising star of the NRL. He also got himself three linebreaks for good measure.

While Paulo played well, the true star of the Eels was Isaiah Papali'i.

With a huge 156 run metres, 34 tries, and playing almost the entire game, Papali'i provided a mammoth effort for his side. He also scored one of the Panther's tries for good measure.

Lock Jason Taumalolo played a great supportive game this week in the Cowboys' win over the Dragons. With some great assists, high tackle efficiency, and 149 run metres, Taumalolo proved his position in this week's Team of the Week.

He had a great linebreak in the 66th minute, assisting Jeremiah Nanai in scoring a try. Taumalolo had a solid 149 run metres despite not being on the field the full game, which was an incredible effort. His tackle efficiency of 85.71% was consistent and strong, with some great moves from him giving the Cowboys a strong lead.

Despite a penalty 63 minutes which left him on report, Taumalolo had a fantastic game.