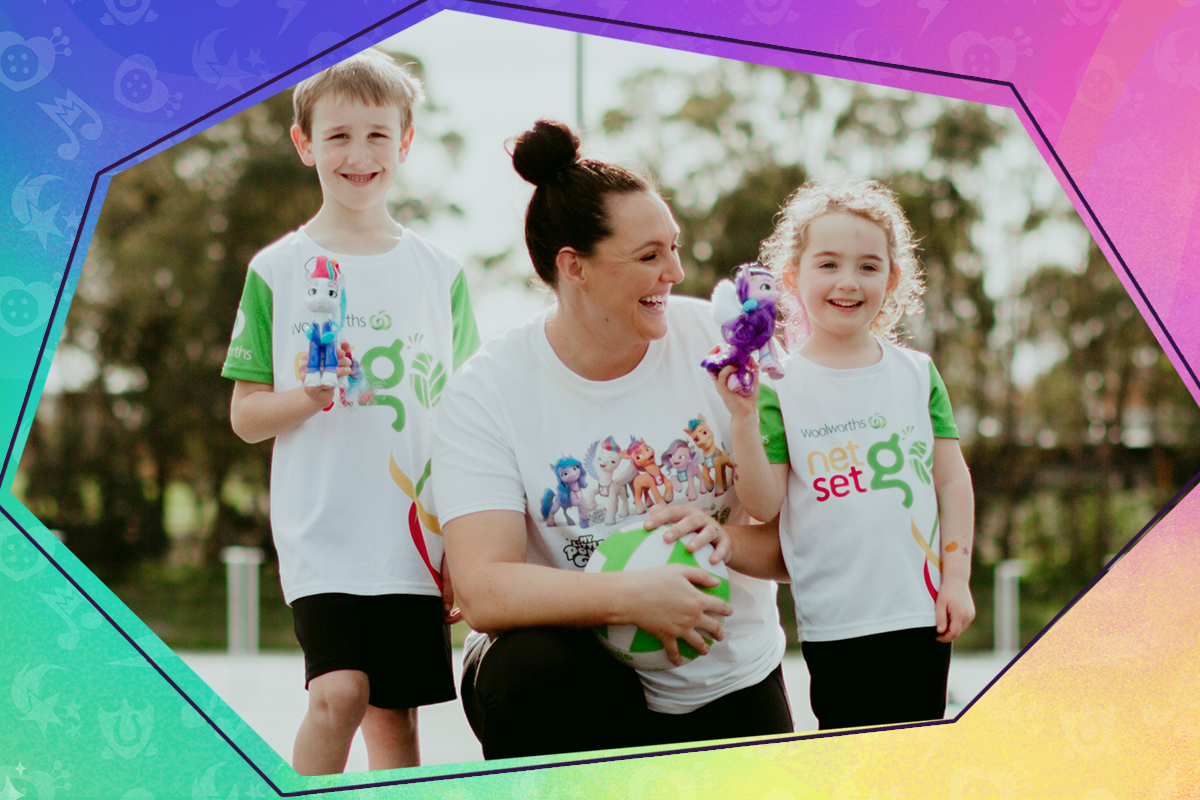 Following their 2021 'Find your Sparkle' campaign with Gretel Bueta, My Little Pony are kicking off another partnership with Woolworths' NetSetGo and Netball Australia.

With the new My Little Pony: Make Your Mark series set to release on September 26, 2022, eOne has also announced its upcoming fundraising initiative with the Confident Girls Foundation. Details about this initiative have not been released.

Former Giants player Sam Poolman will be the 2022 ambassador, having conducted her own ASPIRE Netball program for young netballers in the Hunter region. Poolman has also been involved in one-off NetSetGo clinics in the past.

The campaign will piggyback off Woolworth’s NetSetGo program, serving the question, is this really necessary? eOne had an easy job, essentially throwing money at an initiative that is already well established.

As part of the program, My Little Pony will introduce “co-branded activity packs, inspiring video content, competitions and concourse activations at Origin Australian Diamonds games”, all of which already existed in some capacity via NetSetGo. This means the campaign is unlikely to reach any new consumers - a critical flaw for any marketing campaign.

Netball Australia once again misses the mark with advertising, inhibiting its audience growth. With something like NetSetGo already in place, this partnership is essentially just marketing to the children in their pre-existing audience.

For those on the fence about the NetSetGo program, it's unlikely that the reward of some My Little Pony goodies will clinch the deal.

Obviously, Netball Australia's financial situation means they can’t exactly be turning down offers, but the financial state suggests that they need to start catering to their adult audience. Ultimately, it is adults, young and old, who are attending games, watching the coverage and spending money on both the Diamonds and SSN teams.

In 2020, a Roy Morgan poll found that 78% of SSN viewers are over 35 years old*, totalling approximately 1.1 million people. Around half of these viewers fall under the Leading Lifestyles or Hearth and Home communities in the Helix Personas which classify Australian consumers.

Those within the Leading Lifestyles community are high-income, progressive individuals, whereas those in the Hearth and Home are closer to your “everyday Australian” – members of families who would be considered middle class.

The study identified the that Metrotech group was unrepresented in TV viewership. This younger and "trendy" community are also considered high-income, progressive city dwellers who typically steer away from commercial television. It's highly unlikely that My Little Pony's involvement in the sport will pique their interest.

In 2021, Netball New Zealand received $13.4 million in sponsorship and $10.7 million in 2020. Compared to the Australian dollar, this income is slightly less than what their Australian counterparts have received in recent years. Granted, they don't have an $11 million debt to pay off.

Jamaica's latest sponsorship is as adult as it can get, signing a three-year sponsorship deal with Wray & Nephew White Overproof Rum. This three-year deal is worth JA$14 million ($140,000 in AUD), a sum that would surely put a dent in Australia's deficit.

All in all, the My Little Pony campaign isn’t a bad thing by any means. Getting more children involved in sport is beneficial not only for said sport but also for its participants' health. It is money that keeps the ball rolling for these programs and the sport, and if it keeps the program afloat it's a small win for Netball Australia.

That said, this is a long game move, and Netball Australia doesn’t have time to play the long game. As their debt comes knocking, they will be forced to make bigger plays if they continue to ignore their adult market.

*It is worth noting that the minimum age in Roy Morgan's study was 14 years old, which excludes the age range of NetSetGo participants.