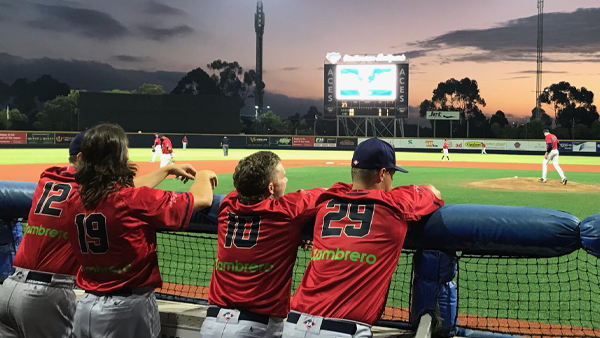 The first taste of competitive baseball between two Australian Baseball League teams since February 2021 was on show at Melbourne Ballpark, with the Melbourne Aces and Adelaide Giants battling it out in The Melbourne Challenge.

With the first game of the three-game series delayed by an hour and a half due to wet weather and ground conditions, play finally began at 8:35 pm local time, albeit for a seven-inning affair instead of the usual nine innings.

The back-to-back Claxton Shield-defending champions, the Melbourne Aces welcomed its 2019/20 ABL Championship Series opponents back to Melbourne Ballpark, and were victorious, winning 2-1 in a contest that could've seen the visitors fight back more, if more innings were allowed.

A mix of veterans and rookies adorned each team's list, as, in place of a 2021/22 ABL season, it has given teams a chance to test new, up-and-coming athletes, as well as development players into learning what it's like to compete in a professional, national-league-like environment.

Melbourne's starting pitcher Jon Kennedy got a called strike to start the game, pitching to Adelaide's lead-off batter Jack Partington, who would become the first out of the game after flying out to centrefield. Kenney would retire the following two batters, getting Donald Lutz and Mitch Edwards to strike out swinging to end the three-up, three-down dig.

Melbourne lead-off Aiden Willis was patient in the box, looking at a couple of outside pitches before becoming the first baserunner of the game, hitting up the middle into centrefield for a single. Darryl George flew out to right field to become the side's first out of the inning.

Willis made it to second on a pass ball from Giants pitcher Mitch Neunborn during Jack Barrie's at-bat which resulted in a strikeout looking. Willis again made his way around the bases due to another pass ball but couldn't find a run as Kyle Perkins became the final out for the Aces, flying out to right field, caught by Max Stagg on the warning track.

Adelaide's lead-off batter Rixon Wingrove became the side's first baserunner of the contest, blasting a shot past first base and into right field for a single. Although he couldn't move any further as the next three batters - Mitch Lightbody, Brody Arriolla and Liam Bull - all went down in succession to end the Giants offensive innings.

In the bottom half, Melbourne went three-up, three-down also, starting with a Jared Cruz swinging strikeout, before Nick Bertucci and Marcus Graham each grounded out to second base, and short stop respectively.

Adelaide went through another inning with its batters going back to the dugout in succession, as Max Stagg grounded out to short stop, Darcy Barry lined a shot to Sam Skinner at second, before Partington struck out swinging on his second at-bat.

Despite Branson Neave grounded out with a hit back to the pitcher, and Skinner looking at strike three, Aiden Willis had his second hit of the ballgame, a single into right field. George too singled with a fly ball into centrefield that alluded the diving Arriolla.

With Willis at second and George at first, Barrie connected well with the pitch, sending the ball into left field and with a fumble by Partington, it allowed Willis to score the first run of the game for the Aces to lead 1-0. Perkins then grounded out to third base for the final out, stranding two runners in scoring positions.

Adelaide went through a thrre-up, three-down dig to begin the fourth inning, with Lutz, Edwards and Wingrove each going down.

Cruz lead off the bottom of the fourth for the Aces and flew out to right field before Bertucci singled up the middle into centrefield. Bertucci stole two bases with a wild pitch from Neunborn, unable to locate the ball which went by him, which allowed the runner to take an extra base and end up at third however that would be where he'd finish up as Graham and Neave struck out looking.

The Aces made a pitching change to begin the fifth inning, bringing in Daniel McGrath to replace Kennedy. However, it was the third thee-up, three-down inning in a row for the Giants - and fourth overall - as Lightbody and Arriolla grounded out, and Bull was caught looking.

Skinner became a lead-off baserunner for the home team when he drew a walk, with the umpire at third ruling that he didn't break his wrists with a check swing. A chance for a double play wasn't completed by the Giants, getting the force out of Skinner at second, with Willis safe at first on the fielder's choice.

George had his second hit of the night, rocketing a shot past third base and into left field for a single, and made his way to third on an errant throw by Bull, attempting the putout at first base on a Barrie hit all the while Willis made it a 2-0 Aces lead when he crossed home plate.

A sacrifice fly out to Arriolla at centrefield was deep enough for George to have scored the Aces third run of the game, however, it was ruled that he left third base early, before the catch was taken, and therefore, became the third out of the inning.

It was another eventful start to the following inning, as, after Stagg grounded out back to the pitcher, Barry found his way onto first base with a single into centrefield. With Aces pitcher McGrath attempting to pick Barry off at first, he was caught in a run-down play between first and second, and made it safely, sliding into second base.

Immediately after the play was made, the light towers at Melbourne Ballpark went down with Barry, looking to take advantage of the darkness, ran towards third base although was sent back, the umpires having called time.

Barry made it to third as Partington was putout at first base, but the Giants couldn't bring he margin back and score as Lutz struck out looking for the third out.

Adelaide made its first pitching change of the night, bringing in former Melbourne pitcher Sam Street who retired all three of the batters he faced in the bottom half of the sixth inning, gaining two swinging strikeouts to Cruz and Graham, with a Berucci flyout to right field in between the two.

Melbourne would need just three outs for victory and a need to restrict Adelaide to one run or less and an Edwards struck out swinging put them in a better place. However, Wingrove was hit by a McGrath pitch and made it to first base, and stood up at second with a Lightbody single into centrefield.

George made it two outs with a throw over to first base to get Arriolla, who in turn, advanced the runners, both ending up in scoring positions. A single into centrefield from Bull - his first hit of the game - cut the margin in half as Wingrove scored the Giants' first run of the night but that would be all, as Stagg struck out swinging to end the ballgame with a 2-1 win to the hosts.

For the home side, the Melbourne Aces found seven hits on the night, with Aiden Willis and Darryl George collecting two hits each. Willis, one of a few Aces players getting their first look at playing at the top level of Australian baseball, scored each of the team's two runs, with both RBIs credited to Jack Barrie.

Mitch Neunborn was entrusted with the ball in hand to start the game for the Giants, going through five innings, giving up four hits, two runs, but claiming five strikeouts along with a base on balls. Reliever Sam Street pitched one inning for zero hits, zero runs and two strikeouts.

Game 2 of The Melbourne Challenge between the Melbourne Aces and Adelaide Giants takes place at Melbourne Ballpark tomorrow night, Saturday,January 8 from 7 pm.