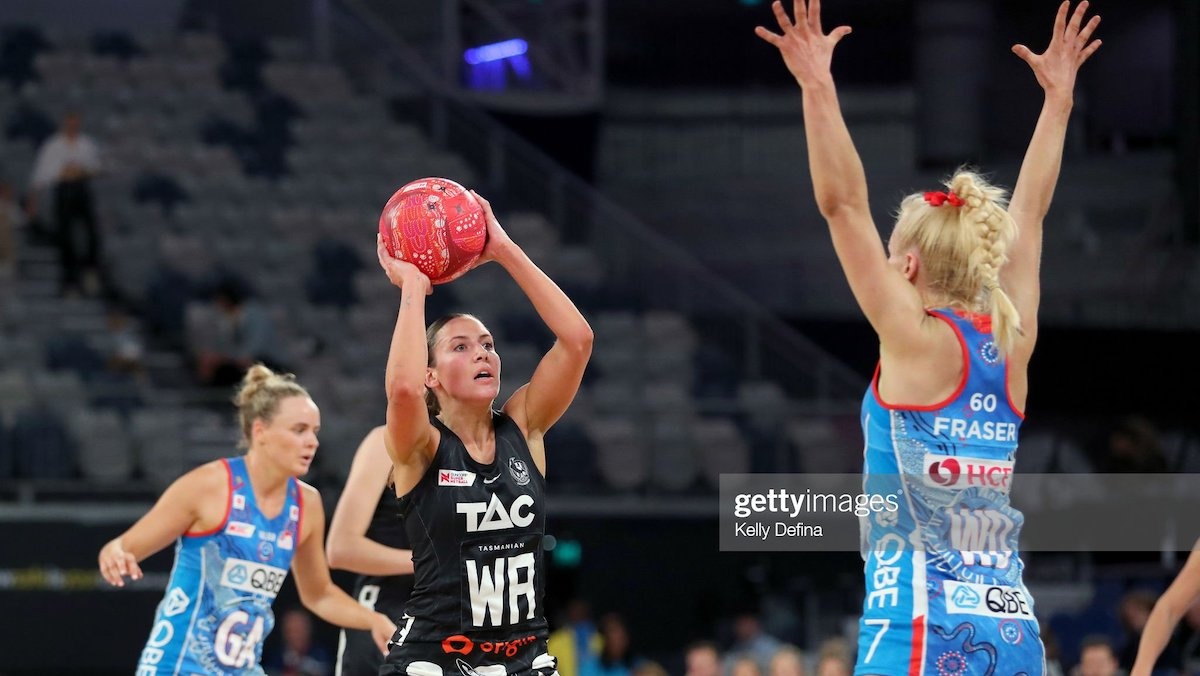 The Collingwood Magpies have come out firing for an exceptional second half against the NSW Swifts to complete a 13 point turnaround and stay in touch with the top four, 66-58.

It was an improved performance from last week's loss to the Adelaide Thunderbirds across the court for Collingwood, with Shimona Nelson shooting at 100 per cent (52/52), while Nicole Richardson commented post-game that it was possibly their best half of netball defensively this season.

While the first half from the Swifts was solid, they fell away just like last week said co-captain Paige Hadley after the loss.

"Really disappointing, I think that's happened two weeks in a row - we've had really great first halves and then we've let them back on top of it in the third and fourth quarters.

"I think in the first half we were just patient... we were getting the ball to the shooters and shooting that high percentage shots.

"And then I thought in that third quarter, we just had no answers for them defensively and then in attack, like we make three or four errors in a row and then that's when that eight goal turnaround came in...

"As soon as they had confidence in that third and fourth quarter, the ball was going in [to Nelson] from anywhere, which is hard to stop."

Richardson was "wrapped" with the win and already keen to get back out there next week with plenty to keep playing for.

"I think, like, that's a really good win for us and that just shows a lot of growth again for us, that's what we're about.

"And I think it was just a matter of making sure we were patient in attack... mind you, we probably should have called a timeout at the end because I thought we started to throw some long bombs in, so we went away from our game plan again, so that's another learning.

"But you know, when the game was up for grabs, I thought the girls, all seven players on court, stepped up so... just wrapped with that result, that keeps our finals hopes alive, and then bring on Sunny Coast (Sunshine Coast Lightning) next week."

In the opening game of First Nations Round, the NSW Swifts started with the Helen Housby - Kelly Singleton combination they've preferred in recent weeks. It started well against the Geva Mentor - Jodi-Ann Ward defensive system, the agility of Housby a massive challenge for Mentor.

Swifts got the first turnover as Sophie Garbin let it go, unable to keep her balance. Though, Singleton missed the opportunity to convert for an early advantage.

The margin moved out to four early on, as Sarah Klau started to get up on the feed to Nelson, confusing the shooter's awareness of her space in the circle.

Ash Brazill was doing all the work for the Magpies on transition, trying to help the attackers get a better angle in to Nelson.

Following a time out, the Magpies pulled the margin in with a couple of pick-ups, and the Swifts responded with their own tactical time out to reset their plans on court.

Inaccuracy under the post from the Swifts gave Collingwood some rebound opportunities, Hosuby was 10/13 for the first quarter, while Singleton ended the opener 5/7. After a scrappy quarter all-round, the Swifts held a lead of three, 15-12.

The Swifts were after more direct passage to the circle edge off the second phase, and would have been pleased with their opening centre pass passage post-huddle.

Singleton's turnovers were mounting up, at four, and it brought the scores level.

Jacqui Newton entered the court as the deficit stretched back out to three, replacing Ward before the Power Five period.

Collingwood made another change, with Garbin leaving the court for Gabby Sinclair, just as Housby put a super shot on the board for the Swifts.

Sinclair nailed her first shot for the Magpies, but at the main break the Swifts led by five, 33-28.

Ward was back on for Collingwood in the second half, and a couple of quick plays off a pick-up and the centre pass saw the margin come in to just two. The feed to Nelson had certainly improved with Richardson's feedback at the break.

The Magpies gained another with Ward's take in front of Singleton, Sinclair sinking the shot to make it just a one shot game. It was level with another Nelson goal.

A tactical time out for the Swifts re-energised the Magpies as well, who came out firing and Ward took another intercept.

The change had been made as well, for the Swifts, who moved Housby out to goal attack and brought Sophie Fawns on at goal shooter.

Four super shots to Sinclair saw the game turn completely in favour of the Magpies, while the Swifts were stuck searching for answers and improvements in their ball handling.

Wards attack on the rebound saw the Magpies complete an 11-point turnaround for a six point lead into the final quarter.

Unlike their third quarters in the 11 rounds prior, the Magpies were energised and attacked the ball.

Speaking about the second half turnaround post-match, Richardson said her side "just needed to go back to the game plan" after they'd started to fall away late in the second.

"I thought Swifts did a good job to force our feed from off the circle edge, so we just needed to make sure that we got some depth and worked the ball a bit closer to the circle. You know, our goal attacks [were] struggling with the physical bodies on them, so we kind of changed up our structure a little bit just to try and free them off the body as well.

"Defensively, we just spoke about trying to find ways, trying to get a better body angle, in order to be able to see ball-player-make and then come off and fly, because the first quarter, even though we got a tonne of ball, they were from missed shots, so we needed to be creative.

"We didn't win much in the second, and then I thought defensively our second half was probably one of the best halves we've had to date."

The changes came from the Akle camp at three-quarter time, with Teigan O'Shannassy entering the game at goal keeper, pushing Klau out to goal defence and 100 gamer Maddy Turner to wing defence.

Singleton also returned at goal attack, with the Swifts reverting to their original circle combination.

After a fairly even start to the quarter, another change was made with Allie Smith taking the wing defence bib.

Eight points down with just over eight minutes remaining, the Swifts called a tactical time out. Akle pleaded for her players to take responsibility for their own energy and stop looking to others for it.

The Swifts' chant was "if it's not you, who?" and they came out of the time out with a job to do. Smith got a tip to give Singleton the opportunity to draw the margin in to seven.

A held ball call against Housby on her shot was costly, the Magpies taking it back out to eight as the Power Five began.

Five points in a row pulled the Magpies lead out to an insurmountable 11 points with just under four minutes to play.

It was a scrappy final few minutes, as the Swifts attempted to take a win with super shots. Housby sunk two, while Singleton managed one as the Magpies' defence focussed on double-teaming the English Rose.

An eight point win to the Magpies keeps them in the finals hunt, pleasing Richardson.

Defensively, the Magpies have struggled in recent weeks, especially against the Giants and Thunderbirds' mobile goal circles. With similar challenges this week, the Magpies returned to a full-court defensive, play your own role first mindset and it worked today, with Mentor the beneficiary.

"I think our big thing defensively across the whole court was accountability, so basically playing your role first before you can go into help mode and help others," Richardson said.

"And Geva (Mentor) and [Jodi-Ann Ward], I thought they were outstanding, and I think that was Geva's best game to-date of the season.

"It was a big occasion for us and big players step up, so it was great, great to see Geva's performance today."

Mentor finished with seven deflections, four pick-ups and an intercept in a player of the match performance.

There was a milestone to celebrate for the Swifts', though, and that was Turner's 100th domestic game. Hadley was disappointed the team couldn't get her a win.

"I love Maddy Turner. It's disappointing not to get the win for her, because she is such a special part of this club.

"I think she is the epitome of what a Swift is, she's loyal, she's hardworking, she flies under the radar - it's never about Mads, it's always about team first.

"It's special to have been there alongside many of those hundred games and to do it all in the red dress, is pretty special, because not many people do it anymore.

"Really disappointing we couldn't get the win for such as special person at this club, but huge milestone for her and I'm sure there's plenty, plenty more to come."

Looking ahead to their Round 13 clash against the Fever, Hadley knows it will do-or-die for her Swifts.

"We've got to be clinical, you know. Fever have got [Jhaniele] Fowler at the back, and you are not going to get much ball off them, so our attack's got to really find answers this week to be able to play out four, strong quarters.

"And I think, you know, when the ball's moving, we're on the move, like we're pretty unstoppable, so we've got to get that consistency and that hunger for four quarters."

Equal with the Swifts, and other teams who are yet to play, on the ladder, the Magpies also need to keep winning to stay in the finals hunt.

"It's great that our final hopes are still alive, so you're really playing for something, and, you know, we've just got to make sure that we have consistency across all four quarters, so try and get off to a better start than what we did," Richardson said.

"I still think we've got room to improve, I thought to today, although we came away with a win, it wasn't pretty at times, it was a little bit clunky.

"So hopefully we can get our flow back and consistency across all four quarters. So yeah, let's see what happens in a week's time."

The Collingwood Magpies travel to the Sunshine Coast to take on the Lightning next Sunday, while the NSW Swifts return home to host the West Coast Fever, also on Sunday.