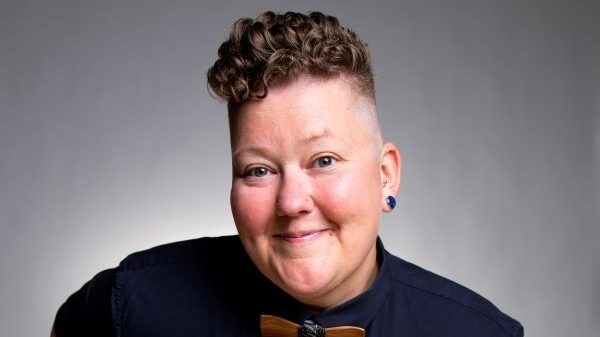 After lockdowns occurred, live comedy came to a halt. Melbourne comedian Kirsty Webeck was encouraged by fans to start a series on online shows. As she prepares to host the fourteenth edition of the Zoom Comedy Hour broadcast, she talks toEdge Of The Crowdabout the work and community behind them.

“My Twitter followers had actually been asking me for a while to do it,” says Webeck of the show's origins

“I kept making excuses as to why I couldn't and then realised I absolutely could and should do it.

“I'm very glad I woke up to myself because it has been a sheer delight! It was always intended to be just one show but it was such a hit and I loved it so much that we've done a bunch of them now!”

Webeck has hosted numerous popular online shows throughout the pandemic.  The shows have provided Australia’s best comedians a place to perform, and people confined to their homes a much-needed laugh.

Webeck is a regular on ABC radio, and has supported some of the biggest names in the game. In 2021, her Comedy Festival show “Chuck A Sickie” received wild acclaim.

She has established herself as one of the most popular comedians in the country. Her online presence is a source of hilarity amid the doom-scrolling that has often dominated the pandemic.

Setting up the online shows was a surprisingly simple process.

“There genuinely were no challenges,” she says

“I teamed up with very good friend and excellent comedy industry legend Janet McLeod who was already an absolute guru of Zoom and my mates in the comedy industry were super keen to get involved.

“Then it was a matter of spending about 15 minutes putting together a ticketing page and we were good to go.”

Occasionally comedians can enter a strange comfort zone. The shift to a Zoom show might have been daunting for some. However, Webeck had no trouble filling the run sheet.

“Some people vowed to never do an online show and politely declined, they'll never work in this town again,” she laughs

“But the vast majority of my mates have been incredibly keen to jump on a show. It's never been an issue getting acts.”

“I go for joyous, upbeat, positive, punching up comedy in general and booking Zoom Comedy Hour is the same. People have been having a terrible time during lockdowns and the pandemic in general, so I want Zoom Comedy Hour to be a really fun time each week.”

Webeck had already become accustomed to performing online. Although after years of the energy of a live audience, some adjustment was required.

“By the time I started Zoom Comedy Hour, I'd been doing loads of online corporates and events, so I was right into the swing of them.

“However, when I first started doing online shows in general, it took a wee bit of getting used to sometimes having no immediate feedback whatsoever.

“I feel like I've done so many now that I love seeing a few smiling faces in the gallery and that's enough for me to know we're all having a nice time and it's not just me.”

The Zoom comedy hour is not the only attempt at moving stand up online. However, it is one of the most successful ones. Webeck’s shows have managed to translate the feel of a live show onto a screen at home.

“I think we managed to create a really intimate, community vibe during the actual shows,” she says.

“I think I was also fortunate enough to be completely supported by my social media followers [particularly Twitter].

“They got around me 100% and have stuck with the Zoom Comedy Hour since day one.

“There are literally about 60 people who have attended all of them and there's a huge contingent who have been to the vast majority of them, too.

“The beautiful messages I receive every time I announce a show and after each show make them completely worthwhile!”

Fans of the Zoom hours will not see the same material as her live shows. Webeck launches her next Comedy Festival showSilver Liningsin March which will be entirely new.

She typically MC’s the Zoom show and is always working on new material.

“I host the show each time and I try to come up with some fresh material to kick the show off in a fun way… I'm treating it as a whole separate thing and having fun playing around in that hosting role.”

The entertainment industry is constantly evolving. The pandemic has forced artists to think of new ways to reach audiences.

Webeck sees a future for online shows even when lockdowns are a thing of the past.

“I think it would be great if we were able to incorporate them into the future of the industry.

"I've received an overwhelming amount of feedback from people about what a positive impact the shows have had on their lives.

“Many people have mentioned that comedy has been inaccessible to them even before the pandemic.

“There are loads of reasons why people aren't able to get out to live, in person shows, including living regionally, venues being physically inaccessible and sourcing/affording babysitters, just to name a few.

“I think it'd be great if we still did some online shows where possible and tried to make comedy a bit more accessible.”

"Gratitude is a hell of a thing"

The Zoom Hours have created their own community. Members of her fan base have bought tickets for those who have tight budgets to access for free. The “pay it forward” model is a result of fans looking out for their favourite comedian and each other.

“It makes me feel deep gratitude and also certainty that there is still a lot of love out there in the world. I could not be more honoured that people trust me to manage that pay it forward process.

“It started because I was giving away free tickets to people who couldn't necessarily afford to buy one but who also really needed a lift.

“Some of my Twitter followers were worried that a comedian who had just lost all their work was giving away tickets.

"So they started buying them instead.

“They wanted to help someone else have a laugh and also support the comedians and the show financially.

“Tell me that's not the most beautiful thing you've heard all week. It's incredibly moving being able to be the person who passes on the tickets to people who are generally having a bad day.

“Gratitude is a hell of a thing and I feel grateful for these shows and the beautiful audience members constantly.”

Getting along to a Zoom Comedy Hour is a treat for comedy fans. Those in isolation or uneasy about crowds can still see Australia's best comedians.

Fans can also follow her on social media platforms under @kirstywebeck where she supplies a steady source of chuckles.

Tickets can be purchased athttps://www.trybooking.com/events/landing?eid=855360&