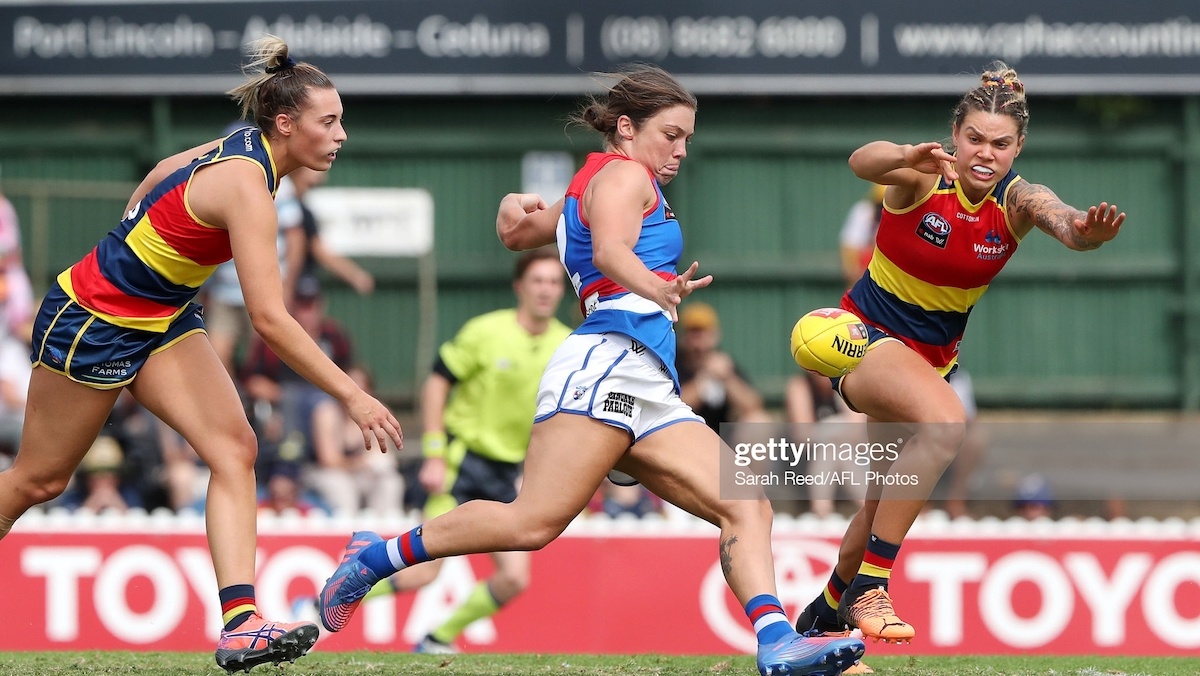 The Western Bulldogs have recorded their first win interstate in two years, holding on in a nail-biter for a one point win over the Adelaide Crows. While a loss is always disappointing, it's better now than deep in the finals says midfielder Ebony Marinoff.

It was a tough result to cop for the home side that was undefeated until this point, but Marinoff says they'll take a few key learnings from the contest and move on quickly.

"But we'll take some learnings out of it and we've got to reset pretty quickly with a six day turnaround to Giants next weekend," Marinoff said toEdge of the Crowdafter the game.

"We're halfway through the season... but it's just legitimately going back to our basics and winning our one-on-ones and, and getting back to playing our Crows' footy.

"And, I mean, you certainly saw us fight back, but we haven't lost since the Grand Final, so it's a bit of a different feeling in the change rooms.

In good news for the Crows ahead of Sunday's match they had just one change, with Teah Charlton returning from the AFL's Health and Safety Protocols. Nikki Gore was omitted to make way for her.

The Bulldogs also had just the one change, naming their final debutant for the season Aurora Smith, replacing Jemima Woods (omitted).

The Bulldogs opened the scoring first, with Bonnie Toogood stabbing at a shot on goal, to put it through low, just over the defender's arms.

She was back in the action less than a minute later, twirling through a tackle before a kick to the goal line was crumbed by Nell Morris-Dalton, and dropped on her boot for a second Bulldogs' goal.

The hot start only got hotter, with Richelle Cranston hitting the scoreboard with another major and the Western Bulldogs had a 19 point lead early in the first term.

Adelaide hit back through Hannah Munyard, her first goal since returning to the side on recovery from Covid-19.

Lisa Whiteley put another on the board, before a thumping kick off the boot of Ellie Blackburn stretched the lead back out to 13.

Maddi Newman had a chance after the siren, but didn't have the distance from 40 metres out, directly in front.

The Crows kept on coming for the Dogs in the second term, Britney Gutknecht got on the end of a team goal thanks to a handball over the top from Kirsty Lamb.

Toogood had another assist, this time hanging the kick up for Celine Moody to pluck out, directly in front of goal.

The Crows needed a goal to break the run of the Dogs, but Hannah Button wouldn't be the one to do it - missing running into goal. Thankfully they kept it down in their forward 50 and Gould was able to toe it through, bringing the margin back to 17 approaching half-time.

Not resting on their half-time lead, Lamb opened the third quarter with a snap that extended the Dogs' advantage to 23.

Ash Woodlands nailed her first for the day to get the Crows' back into the action with under five minutes in the term.

With four of their best around the ball, the Crows got the start to the final term they were after - Whiteley took a strong mark and kicked truly.

Toogood kicked her second goal for the day, but Woodland went kicked her second right after. The competition's leading goal kicker was on the run, off a couple of bounces, it rolled through for a goal, putting the Crows within two straight kicks.

Stevie-Lee Thompson kicked her first for the day, giving the Crows and their home crowd a shot at the win.

Repeat stoppages deep in the Crows' forward 50 were unable to generate a score, a rushed behind would have resulted in a draw, while a goal would have stolen an unlikely victory.

Incredibly, the Bulldogs' defence held their nerve and they remained in front for a one point win.

Brooke Lochland was cleaned up by teammate Toogood, and was helped off the field by trainers with a concussion.

Devastatingly, debutant Smith departed the field early in the piece with a knee injury, playing just three minutes without a touch. Neither Lochland or Smith played any further part in the game, and Smith was on crutches by half-time.

Disappointed with the loss, Marinoff (26 disposals, five clearances, six tackles) said it would have been a "steal" if the Crows came away with the win today,

"If we would have won that game we certainly would have stole the game because I think we were on the back foot for the whole game - and that's a credit to the Doggies.

"I mean, they didn't start the season probably as well as they would have liked and going down with a few crucial injuries, they're starting to hit their straps with the players that they've got available.

So we knew that the Doggies were going to bring their best footy that they've played this season, probably disappointing for us that we knew that that was going to happen and we probably used words more than actions, and started to act on that in the second half.

"Left it clearly way too late, but almost not too late when you're talking one point."

Marinoff spoke about choosing some key takeaways from Sunday's loss, but not too many because you can start to over-analyse, especially with it being their first loss for the year.

One of those key takeaways, she says, is being prepared with their "best footy" for a team to come out firing against them, as the Bulldogs did.

"We probably weren't seen to be one of the good teams at the start of the season, we obviously showed we're capable of stringing some really good footy together.

"So when people come to play us, they're coming to play and take us down and sometimes even with a little bit more edge, so we need to adapt to that real fast. We're a competitive bunch and we love the contested footy, but we've got to win that contested footy and be first to the footy.

The side will be back at West Lakes early in the week, looking to move on from the one point loss and start preparations for the Giants, who they meet off a six-day break.

The Adelaide Crows now travel to Sydney next Saturday, where they'll face the GWS Giants, while the Western Bulldogs return to Melbourne to host the Geelong Cats on Friday night.