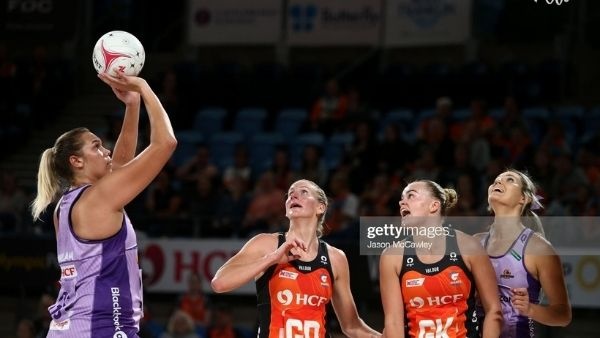 The Queensland Firebirds have secured the side's second win of the season after a 13-point win over the Giants at Ken Rosewall Arena on Tuesday night.

It was a tight first quarter with the home side trailing by two points at the first change before the Firebirds were able to extend their lead to six points during the second quarter. A few super shots from Sophie Dwyer was able to bring the margin back to four at half-time.

The Firebirds then got out to an eight-point lead at three quarter time, although the lead extended in the final quarter with the margin getting to 17 points with just under seven minutes to play. Four super shot goals from Jo Harten saw the margin end up at 13 points on the final siren.

Defender Tilly McDonnell spoke post-match about how the Giants need to be able to treasure possession.

"I think we were disappointed with the result of tonight but i I think we just got to take learnings from that," McDonnell said.

"I think we've just got a treasure possession and when we've got more we hold it and just play our game.

McDonnell came up against Firebirds recruit Donnell Wallam and she said that it was a great challenge for her.

McDonnell said that she enjoyed the challenge of playing against Wallam and took a lot of learnings from it.

"I think she's great. I actually had fun. She's really hard to play against but yeah, I think it's just changing angles and every every shooter has a bit of a different style, so adapting to them and reading their play and coming off the goal attack and wing attack as well, but it's just about all of the unit work for me."

The Giants were the first team to be hit badly by COVID-19 in this super netball season with McDonnell saying that the team has been disjointed in returning.

"I think with the girls being out with COVID and a few things like that has sort of made us disjointed.

"I mean, we're quite a resilient bunch. We faced a lot of adversity last year, we know how to come back from it.

"So I think we just kind of roll with it. I think it's just one of those things, it's gonna be like that for the season. We're kind of lucky enough that we faced it earlier than later."

Queensland Firebirds coach Megan Anderson said that she was proud of her team that they were able to embrace the toughness of the match.

"It was a bit like a ping pong ball in the first five minutes," Anderson said.

"I think the girls were just embracing the grind and knowing that they might have to play a little bit smarter tonight with the tired bodies out there.

"So once they changed their mindset and changed up what they were doing on the court in terms of getting some depth and attack. I think we found our groove."

Firebirds Captain Kim Ravaillion played a key role in her side's win, being named player of the match, having 22 feeds, one intercept and two deflections.

"Rav [Kim Ravaillion] was awesome. I think she was instrumental in a lot of our defensive turnovers and attack she was calm and she was able to to play the ball around until it opened up for our shooters.

"I was really impressed with how she went especially against the quality player of Jamie-Lee Price."

Anderson was pleased with the performance of the whole squad, with all 10 players making an impact out on court.

"I think the major highlight was the fact that we utilised all 10 players and everybody contributed to the minutes they were on.

"It really was going to be a team effort tonight with with a super short turnaround and I expect the same again next weekend against the Thunderbirds."

The Firebirds will take on the Adelaide Thunderbirds on Sunday at Nissan Arena with the first centre pass at 4pm. The Giants will be back at home where they will take on the Collingwood Magpies on Saturday night.