Created by a group of comedic geniuses, there's plenty of memorable yet underappreciated quotes from 2007 motorcycle stuntman comedy, Hot Rod, as discussed on Goals on Film.

By  Jason Irvine and Stuart Kavanagh 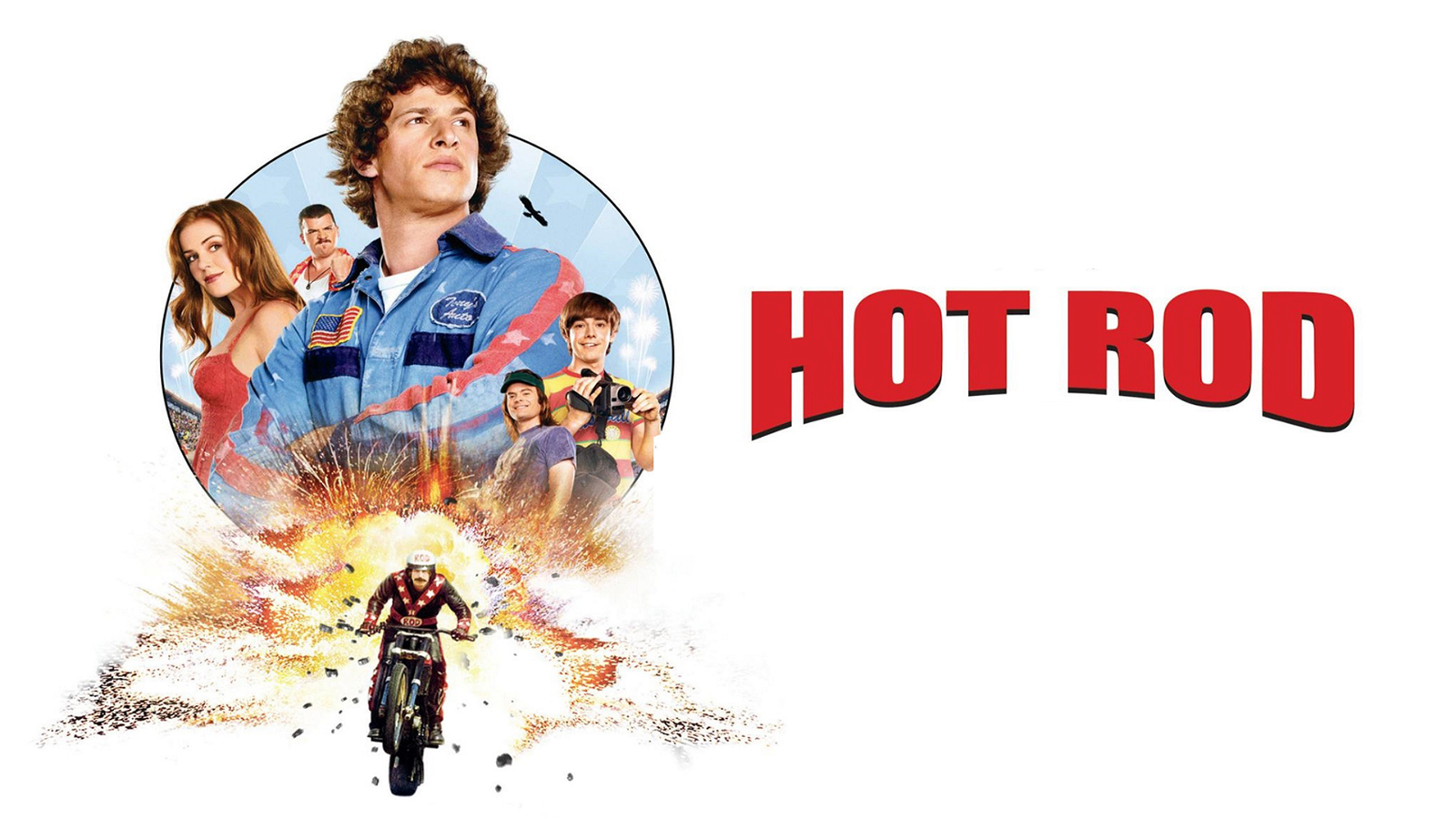 Hot Rod is a cult classic of a film, in most part to its memorable, quotable lines of dialogue. Think "cool beans", "you look shitty" "...and I like to party", and "too legit to quit". But, there's plenty of others that are just as funny, if you really listen.

This quote by Dave is said while Rico is filling up the pool for Rod's underwater strengthening training and is one that might be easily missed. It is spoken immediately as the scene opens and is mumbled by Bill Hader over the sound of the water from the hose entering the pool. However, something so obvious being ridiculously said is on brand for Dave, and this film.

"He died instantly. The next day." - Rod Kimble (Andy Samberg)

Rod begins to tell Denise about his father, his career and how he died and while explaining the sad story, proceeds to explain in detail of the horror crash that lead to his ultimate demise. Rod paints a picture of the situation that is horrific in imagery, but even after all that, he apparently lived long enough to see out the night before passing.

The beginning of Rico's outburst against a redneck-looking fella who storms out and demands answers for his crashed-into trailer, Rico proclaims that he shouldn't be messed with because of his drinking of green tea, while later warning not to mess with him because he goes to church every Sunday.

Sound advice here by Rod while signing autographs for kids at his jump attempt, not wanting others to be consigned to the same fate he learns his dad suffered; choking on pie, leading to his death. It's nice that Rod is looking out for others and their families.

The allure of AM radio is all that Barry Pasternak is holding onto as KNER has the exclusive rights, and this comment from him that he's putting the whole station on the back of this jump attempt either shows his faith in the station... or Rod. Luckily it works out!

Rod returns from his failed jump of the local swimming pool to see his family gathered with tears and tissues, around a sick Frank on the couch. Not knowing what's going on, Rod asks the above question, which the scene does a good job of making it out like it is an interactive theatre art piece.\"Man, we just ran over a small bus." - Dave McLean (Bill Hader)

Rod's a nice guy who, despite trying to now become a regular civilian, still helps out his mates when they're needing to go to the emergency room. But, along the way, Dave thinks Rod's run over a bus. A small bus, but a bus nonetheless. Evident of both the piece of metal in his eye, but probably moreso the drugs he took that lead to the injury.

"You guys are gonna hold me underwater for 40 seconds. That's 20 less than a minute." - Rod Kimble (Andy Samberg)

A line so obvious and ridiculous but hilarious at the same time, Rod does the math and alerts his crew of the time in which he'll be held underwater, saying the line so nonchalantly too.

"You're about to make tears come out of my face." - Rico (Danny McBride)

Tough guy Rico can't deal with seeing Rod in business attire and trying to forget his life as a stuntman, resorting to feeling like he'll cry but saying it in a way where he doesn't want to admit to crying either. It's a Rico way of dealing with what he's seeing and experiencing, but unlike him at the same time.

Ah yes, trying to raise $50,000 and getting the exact amount. The stuff of reality. Or, just film dreams. The exclamation from Barry is said in a way that even he understands how it seems to outside viewers, but also dumbing it down to know it really is just that convenient...

"You couldn't take everyone loving my stunts and thinking you're short?" - Rod Kimble (Andy Samberg)

Rod lashes out at his stepbrother Kevin Powell for making him look like a fool in the documentary. Of all the things to make fun of Kevin for, Rod resorts to calling him short. If Kevin did have ulterior motives, is shortness might not have exactly been what he had in mind that people would forget about.

"Who am I supposed to build ramps for (now)?" - Rico Brown (Danny McBride)

In the same disheartening scene where Rod nearly made him cry, Rico is visibly irate and annoyed at just what he'll do post-Rod as a stuntman. His one love is building ramps and he won't even be able to do that anymore. You can tell why he'd turn into a huff about it.

"Or you could cut the kiddie stuff and show me the crap-yourself move." - Rod Kimble (Andy Samberg)

All Rod wants to know from Denise is whether there's a tai-chi move that would force a grown man to crap his pants. It's all Rod wants to learn. But, when Denise doesn't agree to, Rod has enough and just wants to be taught. Eventually, Denise does perform the move on Rod, which, according to him, definitely didn't work...

"He's driving the bikey-thing with his hands and legs." - Barry Pasternak (Chris Parnell)

Barry mightn't have called too much stunts or motorcycle races or jumps on AM radio, reflective in his commentary here describing Rod and his attempt. The guy he has no clue of the intricacies of the sport and with this comment, the viewers know he doesn't either.

"You know I have a hormone disorder!" - Rod Kimble (Andy Samberg)

Rod and his stepfather Frank fight a lot, wanting to outwit the other and resorting to name calling and illegal weapons. But this one relates to Frank taunting Rod on his inability to grow a moustache, with Rod proclaiming and shouting back that there's one barrier that prevents him from doing so.

"The dog walked itself home, ate a pizza, and took a nap." - Newsreader

The end of the TV news story just before the story of Rod's jump, it's reflective of the colour stories in broadcasts but also takes viewers aback in terms of its ridiculous nature, leaving them to wonder what the remainder of the story beforehand was. But, seems the dog deserved its pizza and nap anyway.

"I'm just kidding. I can hear you. It was just really mean." - Rod Kimble (Andy Samberg)

After a failed attempt at jumping from a tower complete with explosions, Rod takes money from the organiser of the event who proclaims he's a terrible stuntman. The constant replies of "what?" by Rod has the guy repeating himself, before Rod reveals he was just being mean. Perhaps not the way to remain on the nice list of someone trying to pay you for not performing the task correctly.

"And I got you this rock to represent all my hard work." - Rico Brown (Danny McBride)

A string of new, updated items to help Rod in his big jump are given to him, including a cape and a moped. But, Rico's contribution is just as heartfelt. After announcing that he rigged the jump with fireworks, that wasn't enough as he gives Rod a rock to reflect his contribution, which he tells Rod he can throw away after the jump.

"And you know what won't make him smile? When I murder him!" - Rod Kimble (Andy Samberg)

Ah, to see Frank smiling again when he feels good enough to eat dinner at the table again. The taunts by Rod (who's promised his mum not to fight him) don't aggravate Rod physically, but verbally, gets up and raises his voice with continued plans to get the better of Frank in extreme circumstances opposed to their regular fights...

"Why is Rod kissing his sister?" - Dave McLean (Bill Hader)

Denise finally made it to Rod's jump as the two declared their love for each other and shared a kiss which was halted as their mouths were all open, but on the second attempt, it cuts to the rest of the crew watching, with Dave having been believing Rod and Denise were siblings.

"But life is pain and we've got to scrape the joy out of it every chance we get." - Rod Kimble (Andy Samberg)

A bit of an inspiring and uplifting quote from Rod, but also not as he's getting as much strength as possible to stand up after his heavy crash. Perhaps the effect of the crash, and getting his bearings, it's evident he's in pain. But then again, he didn't just witness an out-of-body-experience of a fight between a grilled cheese sandwich and a taco...

For more on this discussion and other talking points on 2007 motorcycle stuntman comedy, Hot Rod, chatting about the star-studded cast of the film that saw comedic geniuses from The Lonely Island and Saturday Night Live (among others) come together, the reference to Evel Knievel and his historic jump, complete with the validity of Rod Kimble's training methods, as well as referencing an array of memorable quotes from the film throughout, listen to Goals on Film on Spotify and Apple Podcasts.

For all the other shows on Edge of the Crowd’s podcast network including Crimes Against Art, you can visit here.