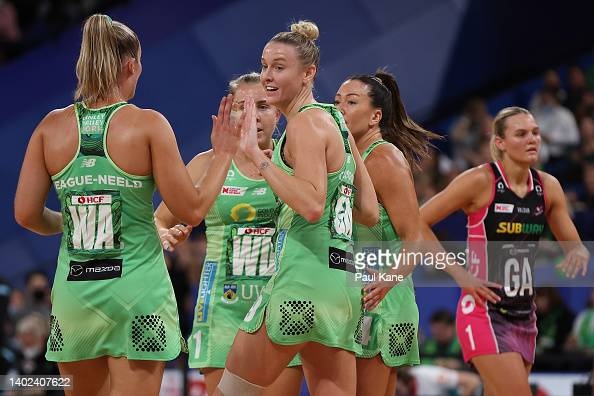 The West Coast Fever emerge victorious at home against the Adelaide Thunderbirds, 68-57, as they tune up for the finals with a strong performance.

With the West Coast Fever locked in for the semi-finals, the Adelaide Thunderbirds needed more than just a win to have a chance at finals.

In both the Team Girls Cup and Round Seven, the Fever ended with a comfortable buffer between them and their neighbours.

In the hours leading up to the game, Matilda Garrett was withdrawn from the game due to a calf injury. Training partner Molly Watson joined the Adelaide Thunderbirds starting ten in her place.

The home team kicked the game off with the centre pass, with Jhaniele Fowler putting the first points on the board. When the ball returned to her end of the court, Latanya Wilson gained some early ball for the Thunderbirds.

Following the goal, the Fever were able to capitalise on a mistake on the attacking end. Once again goal for goal, things seemed to be going relatively smoothly for both teams.

After Lenize Potgieter was called for an offensive contact, the Fever had a three-point buffer to work with. This was increased to four, prompting a Thunderbirds time out. Almost immediately, the team got a turnover but was not able to convert.

Shamera Sterling showed why she is one of the best defensive players in the SSN, gaining some valuable ball against her Jamaican teammate. As the Power Five came into play, the score was 11-9 to the Fever.

Tippah Dwan took her chances at a super shot, putting the score 13-12. The Fever’s Sasha Glasgow didn’t hesitate to make her own super shot, showing off her long-distance shooting skills. Right on quarter time, Glasgow made her third super shot of the game, closing with a five-point lead.

The Thunderbirds kicked the second quarter with a three-goal run, thanks to some defensive rebounds. Despite her success in the first quarter, Glasgow was having some difficulty reaching the net, with four consecutive misses.

Soon, the scores were tied, with the Thunderbirds making seven goals to the Fever’s two. Courtney Bruce and Sunday Aryang were starting to put some pressure on the Thunderbirds attacking end, allowing them to pull ahead slightly.

Coach Tania Obst disrupted this flow by calling a time out, talking tactics with her attacking end. With five minutes left, the Fever had increased their lead to five on their centre pass. Glasgow made her fourth attempt at a super shot, missing her first of the afternoon.

The first interchange of the game came via Emma Cosh in at goal attack. With Glasgow requiring medical attention, the super shot pressure was off the Thunderbirds.

For the second half, the Fever made some positional changes. Stacey Francis-Bayman came in at goal defence, moving Sunday Aryang to wing defence. Jess Anstiss also came on, returning to court after being away due to a foot injury. After a minute, Glasgow also returned to court, replacing Emma Cosh.

Another tactical time-out was called by the Thunderbirds following a three-goal run from the Fever. During this time-out, Georgia Horjus replace Dwan at goal attack and Elle McDonald came in at wing attack.

The Fever were unfazed, racking the points up in their eight-goal run. Now ten the difference, things needed to change for the Thunderbirds if they wanted to stay in the game. Maisie Nankivell took Tayla Williams’ place at centre, after a few poor passes.

On the Power Five, the Fever took a tactical time out. Coach Dan Ryan explicitly told his team that he wanted them to stop Georgie Horjus from scoring any two-point shots.

Up the other end, Glasgow was continuing her super shot run, edging closer to 50 for the season. Horjus made her first of the game, the first of many the team would need if Glasgow continued to rack up the points.

As the siren rang, the Thunderbirds were down nine in a 19-12 quarter. They would need a huge final quarter to cause an upset to the home team.

No changes for the Thunderbirds for the final quarter, whilst Verity Simmons returned at centre for the Fever. The Fever continued to dominate, with the score now 54-41. Following a three-goal Thunderbirds run, the quarter itself was all tied up.

Into the Power Five and there was a nine-point difference. Horjus took a calculated risk on the super shot and made it. The Thunderbirds’ fate was in the young player's hands.

With two minutes to go, Horjus made another, putting the score at 63-57. The Thunderbirds needed a turnover desperately, but they were struggling to hold onto their own ball.

Glasgow sealed the deal with a super shot, ending the game 68-57. With the crowd on their feet, the team were just one win away from a home grand final.

Coach Dan Ryan commented on the crowd post-match, saying "We know how much of an extra shot of adrenaline it gives us when the pressures on so amazing crowd today. It's been brillant all season, but today was just next level. So hopefully we get a chance to play here."

Unsurprisingly, Glasgow was named player of the match, with six super shots, 12 goals and 16 goal assists.

The loss means the Thunderbirds’ season is over, finishing at either sixth or seventh, depending on the following game's results.

Post-match, Fever Coach Dan Ryan commented on the Thunderbirds, particularly their defensive end, saying, "Full respect to them and how they attacked the game today."

"And that defensive circle of Latanya Wilson and Shamera Sterling, unquestionably the best in the world at the moment as a duo and the way they challenged us and had to make us think about how we score goals differently was so important for us.

"I loved our response in the second half to be a bit more disciplined in that space. But they really challenged us and we had to fight to win."

Next week, the West Coast Fever will take on the Melbourne Vixens at home for the major semi-final.