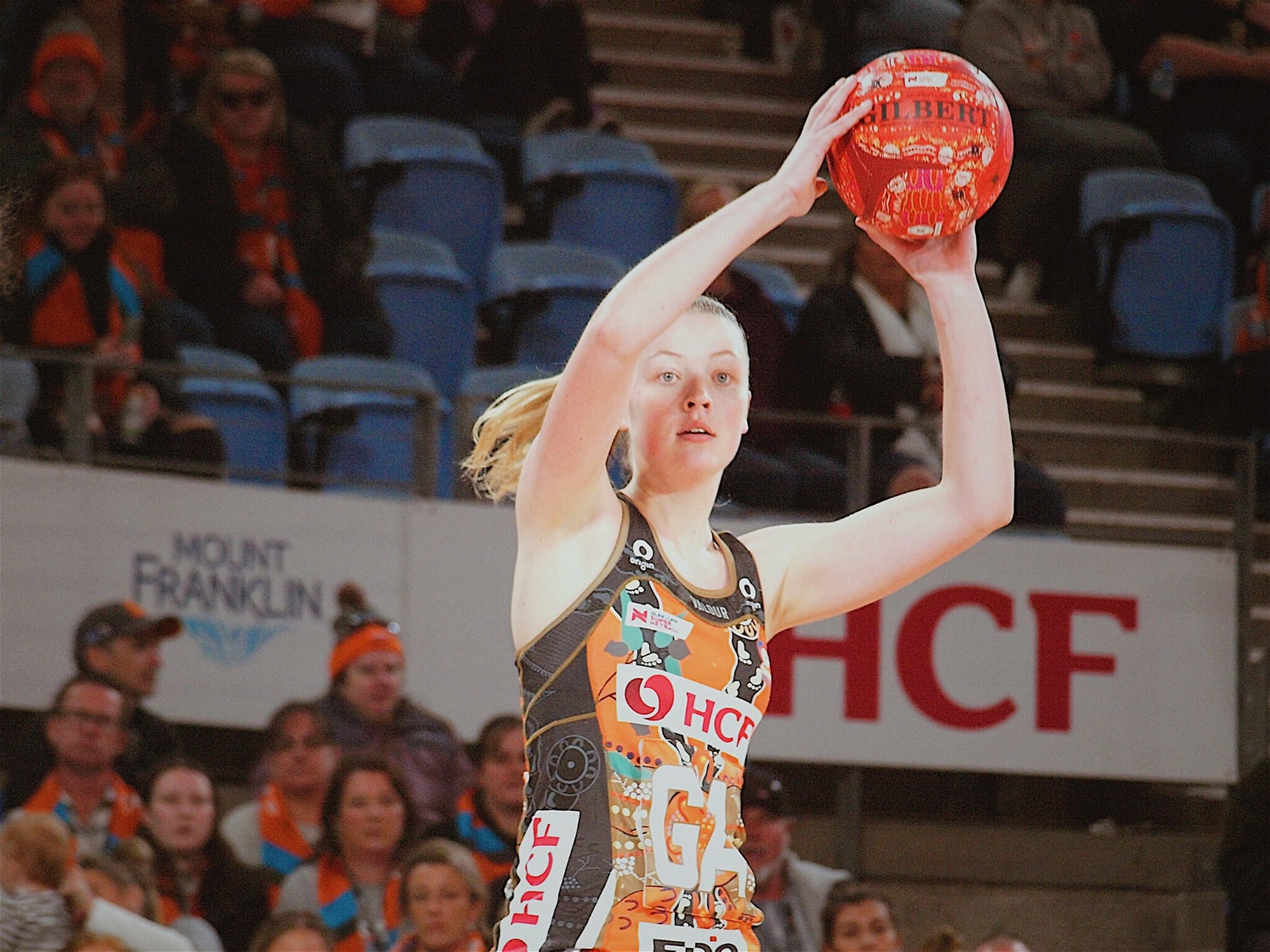 The Giants have beaten the Adelaide Thunderbirds to move into third on the Suncorp Super Netball ladder, with a 59-50 win at home.

The Thunderbirds were hit early, with Georgie Horjus ruled out a few hours before the game with illness.

Lucy Austin was added to the squad, and immediately took the goal shooter bib, ahead of Lenize Potgieter.

The Thunderbirds were their own worst enemy, with seven turnovers in the first quarter, as the Giants picked up three intercepts in the first term.

Adelaide also struggled in the first quarter at the attacking end, scoring just seven goals. The struggles were typified in the dying seconds of the term, as Tippah Dwan passed out of the circle, hoping to reposition a super shot, when time expired.

The second quarter was more of the same, as the Giants continued to extend their lead, and the Thunderbirds continued to turn the ball over.

At half time, Sophie Dwyer had 18 goals to her name, the same output as the total for the Thunderbirds. Dwyer did have a super shot to her name, but it was indicative of the dominance the Giants enjoyed in the first half.

The second half started with the Thunderbirds showing more endeavour, as the defensive duo of Latanya Wilson and Shamera Sterling came alive.

The duo combined for five gains and an intercept in the third quarter, and had three gains and three intercepts in the fourth quarter.

The Thunderbirds won both quarters in the second half, but not by enough to undo the damage done in the first half.

Despite a late flurry of super shots from Tippah Dwan, and the continued late turnovers, the Thunderbirds fell short by nine goals.

After the game, Thunderbirds captain Hannah Petty was blunt in her assessment of the way her team started.

"Our first quarter was horrible, there’s no hiding from it," she said.

"The rest of the game, we were on even par. But it was the first quarter, so for next week, against the Vixens, we will look at that and try to get a good start."

Petty explained that the momentum shift late in the match had given the Thunderbirds belief that they could claw back the margin.

"We knew that it was only a few turnovers and then the momentum would start going our way, so that’s what we focussed on, the first 3, and then that would set us up for the rest of the quarter, and we believe that we could do it, and we almost got there."

She identified where it had gone wrong for the visitors, as they came down from the high of last week's win over Collingwood.

"I think it was just our connection work. Defensively, we played to our game structure, we could have won a few more balls yes, but it's just looking after [the ball], that’s been our thing all season, making sure that when we get the opportunity, we put it through the goals.

"We’ve just been pretty honest with each other. We know where we fall down, and we look at those, and address them and then we move on to next week.

"We’d love to be more consistent, and that's been our Achilles heel this year, but we just keep looking to build each week and not worry about too much and keep what’s going on in the inner sanctum right."

Tayla Williams is one of the Thunderbirds who has built herself up over the season. Image: Raheemah Bolkiah

For the Giants, the game had mixed feelings, Despite being pleased to get the win, the home side would have liked to extend the lead, and not let the Thunderbirds back into the match.

Jo Harten, Giants captain, was clear on her view about that.

"I’m a bit frustrated that some of the things we did were our own doing, our own mistakes," Harten said.

"We misjudged some of their defenders, and didn’t give them enough credit at times.

"I thought Tilly [McDonell] had a really good game for four quarters, and Parmy [Amy Parmenter] and Jay [Jamie-Lee Price] did a lot of work in front of her, so theres so much positive to take from that.

"The last time we played them we lost, so the second half can improve, but you always want to have those improvements."

Sophie Dwyer starred for the Giants against the Thunderbirds. Image: Raheemah Bolkiah

Harten commented that she enjoyed the tough matchup against Sterling, who finished with eight gains.

"I like playing Sterling because people rate her as the best goal keeper in the world. To get the win over her, and the Thunderbirds (last time we played them they beat us), is fun.

"What I’m trying to do is move her around the goal third, not just the goal circle, I’m trying to get her away from what she is brilliant at, which is the standing jump, using that, and her arms and her reach.

"My aim tonight wasn’t to score, it wasn’t to score loads of super shots, it was to get her out of the circle, get her moving, to free things up for Soph [Dwyer], and I think we did that well tonight.

"I always know where Sophie is for 60 minutes usually. She doesn’t know what I’m about to do, but I’ve got my eye on her. I love playing with Sophie, its such a unique combination, it's a 33 year old and a 20 year old, so I’ve got all the bags of experience, and she’s got all the bags of potential.

"When you play with someone like Soph, we are actually really alike. We are both left-handed, were both quite intelligent off the ball, and it's great playing with her. When we are on song, we’re kind of nailing shots from all over the circle it's a really comfortable place to be.

"She hasn’t played much on international defenders like Shamera and Latanya, so that was a new experience almost for Soph, and stepping up and taking a really strong lead out the front tonight, I was really impressed with her.

"In a normal world, with a goal keeper that doesn’t have the range of Sterling, you can actually post up and ask for a lifted ball. I think we played wide coming down the court, and I think when [Price] hit the circle, we were kind of prepared for a wide sideline game, and then we all of a sudden brought it into the middle.

"As a shooter, doing that work under the post, doing a bit of a shorter, sharper dodge, but as feeders as well, I need confidence to do that work, that they’re going to give me that ball, and in that third quarter, we put that ball into Shamera’s hands, because I was standing behind and things like that, so its good to have things to work on, because we come up against another rangy defence next week in the Firebirds."

Price explained how much of a focus the width of the game was, for the Giants to try and reduce the impact of Wilson and Sterling.

"They’re really good defenders and they get a lot of ball for the Thunderbirds," Price explained.

"We tried to keep them away from getting all those flashy intercepts, and the only way to do that is to play wide and off the circle edge to keep them out of it."

Despite the comeback, Price was pleased to get the win at home.

"It was really important for us to get the win. We had such a good start, we let them back in a couple of times, but we didn’t panic, and maintained a good lead, so I’m proud of the girls."

With the win, the Giants are vaulted into third place, while the Thunderbirds slip to fifth, with two rounds to play.