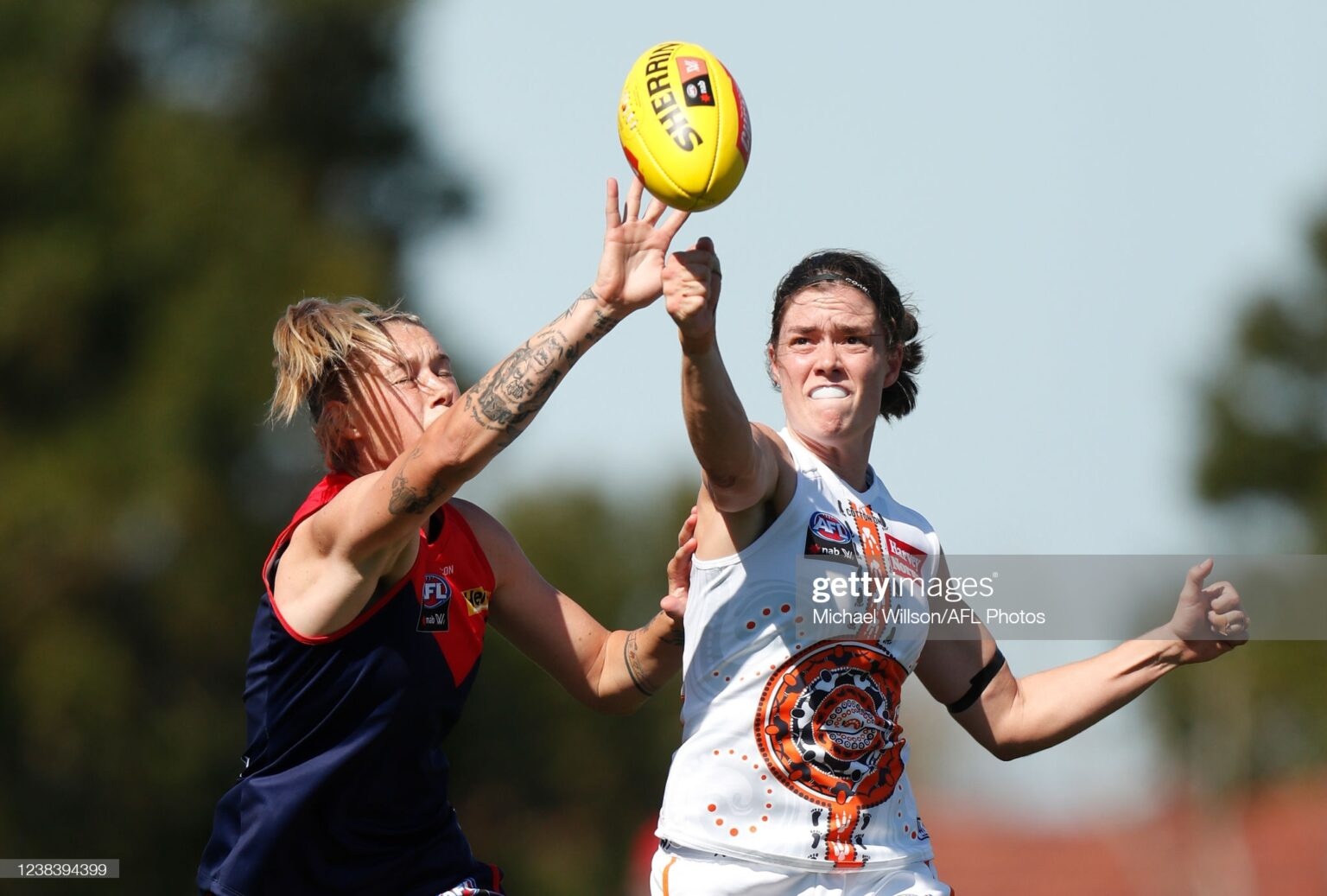 GWS Giants have been thumped by Melbourne Demons 44-7 on a windy afternoon at Casey Fields, as Jess Doyle scored to get the Giants on the board late.

The Demons won the toss and elected to kick with the wind in the first quarter, but for the Giants, the bigger concern was Alyce Parker and Pepper Randall both limping off within the first few contests.

While both made a return, there was little doubt that each was sore and affected. It was a particular problem for Randall, who started matched up on Tayla Harris, and played her well in the two contests before the injury.

Harris got off the hook for the opening score, and continued to threaten through the afternoon, eventually kicking two majors as the Demons piled on the hurt.

At the other end, the Giants struggled to find any clean ball movement, with Libby Birch and late inclusion Alison Brown wreaking havoc.

Parker's injury didn't slow her down, as she had 18 disposals to half time, but struggled in the second half, finishing with 23 touches to lead the Giants.

She was the lone hand through the midfield, as Karen Paxman (21 disposals, five tackles), Lily Mithen (22 disposals, four marks) and Tyla Hanks (21 disposals, six tackles) dominated the middle of the park.

Parker won plenty of ball inside, but her opposite number Hanks proved to be damaging once the ball got outside, feeding a potent Demons forward line.

With Harris in strong form, Daisy Pearce and Kate Hore were also prolific, with Hore kicking two goals and Pearce scoring one and dishing off a couple more.

The only thing that kept the Giants in with any home for the first three quarters was the Demons' poor kicking, as they sprayed 3.8 to three quarter time, before finding the accuracy.

The Giants were scoreless until just a couple of minutes to go, when Jess Doyle popped up, crumbed a contest in the goal square and kicked a goal, avoiding the lowest score in AFLW history.

Doyle spoke toEdge of the Crowdafter the game about the importance of getting on the board late in the game.

"It was obviously a bit late for it to happen, we would have liked for it to have happened a bit earlier in the game, but it was good to get some points on the board for the team," she explained.

It was Doyle's third goal in as many games, a streak that she is happy to continue as she players her part for the team.

"I'm pretty happy with it, not expecting it to happen, but just playing the game as it goes, and it happened to be like that which is pretty cool."

Today Jess Doyle's role included some time on Libby Birch, which she admitted was a learning experience that she took plenty away from.

"She didn't stop, did she? We ended up on each other for a bit.

"She's really good at reading the ball in the air, so she did get quite a few intercepts. I'll have to look back on that footage and see how she did that and improve on that for us as a team."

The youngster admitted that the adjustment to AFLW has been eye-opening, but she's optimistic that she will get more comfortable and used to the game with more experience.

"All the games have been difficult coming up. AFLW is a step up, definitely faster, stronger girls, good skills, so I think I'm just trying to get the hang of it.

"I think the more games I will play, the more I will get used to the fast footy and the fast skills."

The Giant spoke on the team's biggest loss ever, coming off an extended break due to a Covid-19 outbreak that ripped through the squad.

"I don't think that we use the excuse of Covid, I just think [the Demons] were better at the contest, and then they got it outside, and got it going a bit more than us."

The Giants will return to Sydney for three home games in a row, including a visit to Canberra, while the Demons will test their premiership credentials against the reigning premiers, the Brisbane Lions next round.