Everything Everywhere All At Once: a multiverse of cinema delights 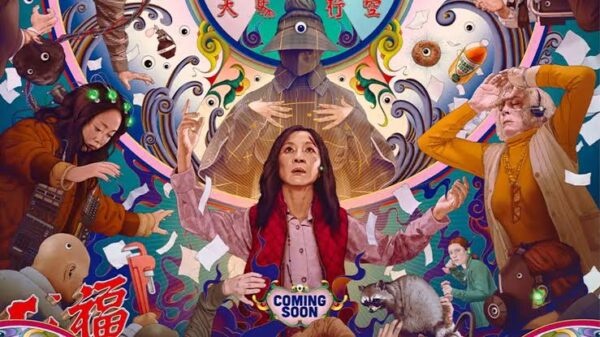 Everything, Everywhere, All At Onceis a hard movie to describe. The increasingly popular film is a Kung-Fu epic, a family drama based in infinite universes but set primarily in an accountant’s office.

It is an absurdist comedy in the style ofBeing John Malkovichand a surrealist meditation on relationships likeEternal Sunshine of The Spotless Mind.

The plot follows Evelyn [Yeoh]. A laundromat owner who cannot relate to her daughter is facing a tax audit, and unbeknownst to her is in a marriage teetering on divorce.

While meeting with IRS investigator [Jamie Lee Curtis], her husband is used as an avatar from an alternate universe to deliver some news. Evelyn learns that she might be the key to defeating a threat to all existence.

Evelyn learns that she can connect with other versions of herself. She can absorb their skills and experience but it comes with a catch. You also connect to their emotional baggage and trauma.

The film, by the co-directors Daniels, is an action-packed examination of the relatable question, “what if?”

The immigrant story [Based closely on director Daniel Kwan’s family] is the perfect setting for this.

Through the multiverse, Evelyn is able to examine the pivotal moments in her life. What if she had not married her husband? If she had not moved to America, could she have found success at home?

These questions are not limited to Evelyn. In another universe, an obnoxious pet owner [Jenny Slate] is a deadly dog-hurling assassin. Jamie Lee Curtis’ Deidre finds love, albeit with the downside of “hot-dog fingers.” Most importantly, Evelyn sees the multitude of possibilities she has to connect with her husband and daughter, or not.

To explain much more would be venturing into spoiler territory. In many ways, this movie will excite and move you. It combines existential themes with traditional Kung-Fu in a way not seen sinceThe Matrix.

It draws inspiration and interpolations from other moments in cinema and pop culture to create a truly unique film.

Everything Everywhere All At Once is an emotional rollercoaster, told with spectacular vision. At almost two and a half hours it does feel long in places, mostly due to the three-part structure. However, it is genuinely unpredictable and brilliantly entertaining.

The cast is uniformly great. Stephanie Hsu as Evelyn’s daughter Joy is at time terrifying and hilarious, and James Hong is sinister, befuddled, and warm in different iterations.

Above all others, Michelle Yeoh steals the show.

The superstar of Hong Kong cinema has enjoyed a renaissance of late. Crazy Rich Asiansreturned her to the A-list whileLast Christmasallowed her to flex her comedy chops.

Gunpowder MilkshakeandShang Shiteased a return to her action roots. However, she was underused in those films.
Long term fans who wanted to see the Yeoh ofWing Chunand Crouching Tigerwere left slightly disappointed.

Everything, Everywhere All At Onceis vintage Yeoh. The sight of her swatting away a kick to her head or spinning a riot shield to defeat multiple assailants is one to behold.

Evelyn was originally envisaged as the supporting character, with the husband playing the multiverse-hopping hero. The film was conceived as a Jackie Chan vehicle.

In another universe that might be a good movie. Here, the screen belongs to Yeoh which makes a great one.

Appearing in his first role for almost 40 years, Ky Hu Quan is a delight. Thebest side-kickin an Indiana Jones film has explained that his hiatus was not entirely by choice. The lack of options for Asian actors in Hollywood forced him into semi-retirement.

After seeingCrazy Rich Asianshe experienced what he described as “FOMO.” Upon realizing that there were now mainstream roles for Asian actors, he got back in the game.

It is to cinema’s benefit. Ke Quan is a delight inEverything, Everywhere. At 50 years old, he has lost none of the charm that made him an 80s icon.

In his first pure action sequences since 1984, he delivers one of the film’s best sequences. A bum-bag never seemed so deadly before.

Ke Quan’s return to the big screen is a triumph. Although Yeoh’s Evelyn is the main character, Quan is in some respects the emotional heart of the film. He has some of the most quotable dialogue and portrays both the audience surrogate and provides the call to action for Evelyn.

This is a film that is almost impossible to describe [we have not even touched on “Raccacooney.] However, it is possible to explain what it makes you feel. In simplest terms, everything, all at once.