Edge of the Crowd's top movies to watch this Valentine's Day 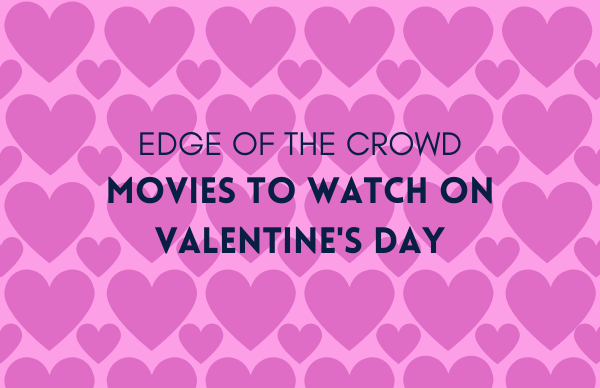 Rather than scrolling through Netflix, Stan or Disney Plus we've got a list of some of the best movies to watch this Valentine's Day.

Starting with a movie that really is great to watch any day of the year, Valentine's Day is just a good excuse to watch the 2005 adaption of Jane Austen'sPride and Prejudice.

Die-hard fans of Austen will always have the gripe that the film isn't always faithful to the source material but from Mr Darcy's hand flex to the failed proposal in the rain of all places to the final successful proposal as day breaks, the movie has thedramathat you, unfortunately, don't get being completely faithful to Austen's work.

If you are looking for something faithful to the source material (and have six hours to spare) then BBC's 1995 adaption featuring Colin Firth as Mr Darcy.

17 years on you'll recognise some familiar faces amongst the Bennett sisters aside from Kiera Knightly that may entice you to dip into their filmographies from Rosamund Pike (Jane) inI Care A Lotto Carey Mulligan (Kitty) inThe Great GatsbyorPromising Young Womanand even Matthew Macfadyen inSuccession.

If you've got kids or happen to be babysitting on Valentine's Day this year we'd recommendThe Parent Trap, it's got plenty to keep kids entertained while having an adorable romance between the parents Nick and Elizabeth.

Good luck convincing the kids that it's just one Lindsey Lohan playing both Hallie and Annie, and they're bound to despise Elaine Hendrix's Meredith just as much as you did when you were a kid but it's a feel-good film that will keep everyone entertained while ending early enough that you can put another movie on after once the kids are in bed.

There's been many Shakespeare plays adapted to high school romantic comedies but something about10 Things I Hate About Youhits different. Featuring a young Heath Ledger and Joseph Gordon-Levitt as Patrick Verona and Cameron James respectively as they try to date the Stratford sisters Kat (Julia Stiles) and Bianca (Larisa Oleynik).

If you haven't watched it in a while or haven't seen it at all we'd recommend putting it on while you're eating dinner at home, so you can laugh while also getting a kick of late 90s nostalgia from the fashion to the music while not getting hit with the same amount of dated slang that another 90s adaption of a classic text,Cluelessfeatures.

The glitz and the glamour of 2018'sCrazy Rich Asians, will give you something to live vicariously through while you spend Valentine's Day at home this year.

It's not as high stakes as other romance movies that feature disapproving family members but Nick (Henry Goulding) and Rachel's (Constance Wu) first trip to meet Nick Young's mega-wealthy Singaporian family but Nick's mother Eleanor's (Michelle Yeoh) disapproval contextualised by her own issues with her mother in law in the past add a sympathetic lens to an otherwise easy to villainise character.

All this is set around the backdrop of a week of wedding celebrations with other amusing family members makes for an entertaining romantic comedy that ends with just as much drama as the climax of the movie albeit a different kind of drama.

Crazy, Stupid, Love.could have fallen into the trap of being yet another big ensemble movie where all of the character's plotlines turn out to be connected in a heavy-handed manner right at the end. Fortunately for everyone it doesn't, which is why the movie manages to hold up despite some of the problematic elements that very much date it as a movie from 2011.

Ryan Gosling and Emma Stone's chemistry is a huge part of the reason why the movie holds up. Additionally, Steve Carell and Julianne Moore's complicated separation ends in the pair coming to a better place after Carell's character, Cal retells the story of the early stages of his and Emily's (Moore) relationship and his desire to keep trying even though their ending is left up to the viewers.

Hear us out on this one, while it's rare to see an action movie on a list like this, it is also the perfect movie to watch with your partner or if you're feeling like something that is a little more of an anti-Valentine's Day flick.

Originally released on Valentine's Day in 2016, Deadpool's love against the odds plotline might hit your feelings and give you the loved up boost you need, or the comedy coupled with the action sequences could be just enough to distract you from the romance between Wade Wilson and Vanessa.

If passionate fans committedDeadpoolcould have the same legacy asDie Hardhas with Christmas and be the controversial albeit entertaining, hat thrown in the ring as the best Valentine's Day movie.

A classic for a reason, whether it's the romance of Buttercup and Wesley or Inigo Montoya's quest to avenge his father,The Princess Bride's story has stood the test of time, even if the special effects haven't.

It's also another movie that is perfect to watch with older kids, that can't be dismissed as a 'kissing movie', with the at times absurdist comedy and action distracting them from the romantic plotline, as well as the cuts to the grandfather and his sick grandson providing additional humour.

It also makes for easy watching and even if you've seen it a couple or twenty times there will still be a few moments that make you laugh.

Baz Luhrmann's 1996Romeo + Juliethas everything you expect from a Baz Luhrmann adaption of a Shakespearian play, coupled with a young Leonardo Di Caprio but doesn't have the three-hour runtime that James Cameron'sTitanic.

We all know the story of the star crossed lovers and many of us studied it in high school but the spectacle of Baz Luhrmann's adaption, featuring modernised set and costume design while adhering to the source material's script separates it from the crowd from countless adaptions.