Edge of the Crowd's October 2022 Playlist

Ariana, Billy and Dani share their songs of the month, mixing new and old, local and international for a jam-packed playlist. 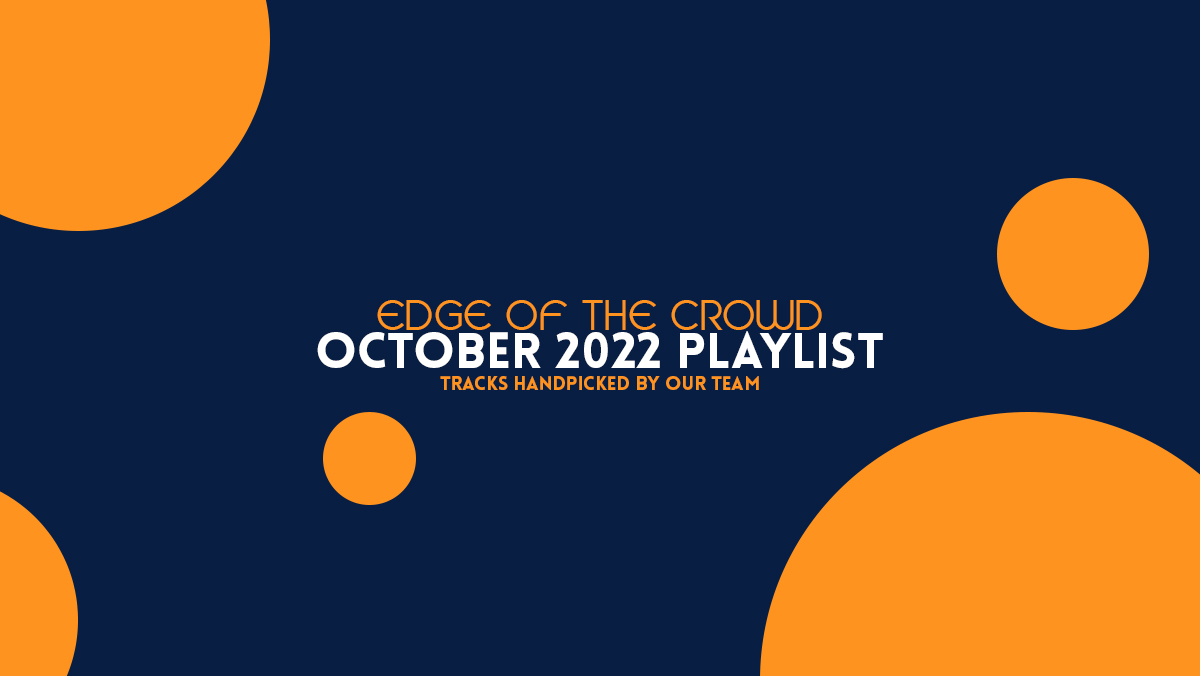 It took me a hot minute to listen to The 1975’s new album — mostly because I wanted to sit and listen to it top to bottom and couldn’t find the time (thanks Uni). While the songs of the album are still relatively new to me, I can see Wintering being one that will be so fun to sing along to once I know the words. Already lines like  “Woman, you are sixty-four years old!” are becoming my favourite parts of the listening experience.

The 1975 really tore it up, metaphorically, with their new album Being Funny In A Foreign Language. It's so good. Looking For Someone (To Love) is just a genuinely fun and endearing song to listen to – also helps that Matt Healy is an incredibly attractive and talented man. Whatever, I might be reverting to my 2013 Tumblr days by saying this, but there's something quite neat about that Matthew Healy. "A supreme gentleman with a gun in his hand looking for somebody to love!"

Taylor Swift - You’re On Your Own, Kid

On my first listen through Taylor’s new album Midnights, this is the track that truly captured my attention first. A gentle, simple pop ballad explores complex themes of growing up and chasing dreams with no one backing you except yourself. It sounds bright and sunny but it’s a sad tale that gives an insight into her time in the limelight and how it can often be a lonely affair.

I first discovered the 1971 album Blue by Joni Mitchell, in mid-2021, recommended by a friend. To this day, I've never heard an album so deeply devastating and that could resonate so timelessly. Blue, as a track, is so sonically beautiful and vast – it makes me well up with emotion. When I'm going through it — Blue is an album I turn on, while I look at the ceiling and think about life.

Like most people who were in Australia in the early 2000s, I’m familiar with Ben Lee through his iconic song Catch My Disease. Recently I became more aware of his work through Georgia Maq, who covered one of his songs at a recent gig of hers I attended. During the show, she spoke of her love of Ben and his musicianship.

Arsehole is one of Ben’s more recent tracks, which just so happens to feature Georgia (albeit briefly). In the song, Ben reflects on his youth and being an arsehole (and having lots of fun!). Despite the comical title, Arsehole is actually quite heartfelt, with Ben commenting that “time has a way of shaking it out,” a sweet way to talk about how we change as people over time.

Off Poppy's newest EP of the same name, Stagger is such a pretty-sounding piece of music. If there was an instrumental of Stagger on YouTube, I'd probably regularly listen to it. "You see, the mountain's just a cliff and I can't talk you down from it" is a line from the song that has stuck with me since I listened to Stagger for the first time.

One of the biggest and best songs Thornhill has ever released is Raw. This one is Thornhill at its theatrical best. The deep, chunky-yet-smooth bassline and riffs shine as the band explores new soundscapes. Shimmering synths and crisp percussion complements the range of vocals. While it’s a few months old now, I’m including it because Thornhill was in my city this month and I didn’t get to see them - it’s the first Adelaide show of theirs that I haven’t been to. Please forgive me, boys!

Dirt Femme was also an incredible release by Tove Lo – also her first album to be independently released. Her commitment to the art of creating a club banger with meaning is truly unmatched and it shows through Dirt Femme; but sometimes you just want to feel like the centre of attention / the only person in the world that matters. That's what this song is for!

Dream State is back, baby - and they’re heavier than ever! After the Welsh alt-rock band farewelled lead singer CJ Gilpin and guitarist/vocalist Rhys Wilcox in February this year, there was practically radio silence regarding the future of the band - until out of nowhere, Taunt Me dropped on October 14. New members have been revealed as Jessie Powell and Tom Connolly, and Jessie’s vocals sound similar but importantly not the same as CJ’s.

The production of this song is cleaner and not as grungy as previous releases, but overall the song is heavier. The little electronic moments Dream State is known for are littered throughout and the chorus is catchy as hell - definitely, one to add to your playlist if you’re a heavy music fan.

Jaboukie Young-White, of The Daily Show with Trevor Noah and Twitter fame, releasing music? Didn't see it coming. Also did not see how much of a queer BANGER this song is. When I'm going for my morning walks, this has been THE song to hype me up. BBC! That's that BBC! Need an album from Jaboukie immediately.

Listen to our playlist on Spotify: