Edge of the Crowd’s November 2022 Playlist

Once again, members of the Edge of the Crowd team has combined their interests to create one genre-spanning playlist. 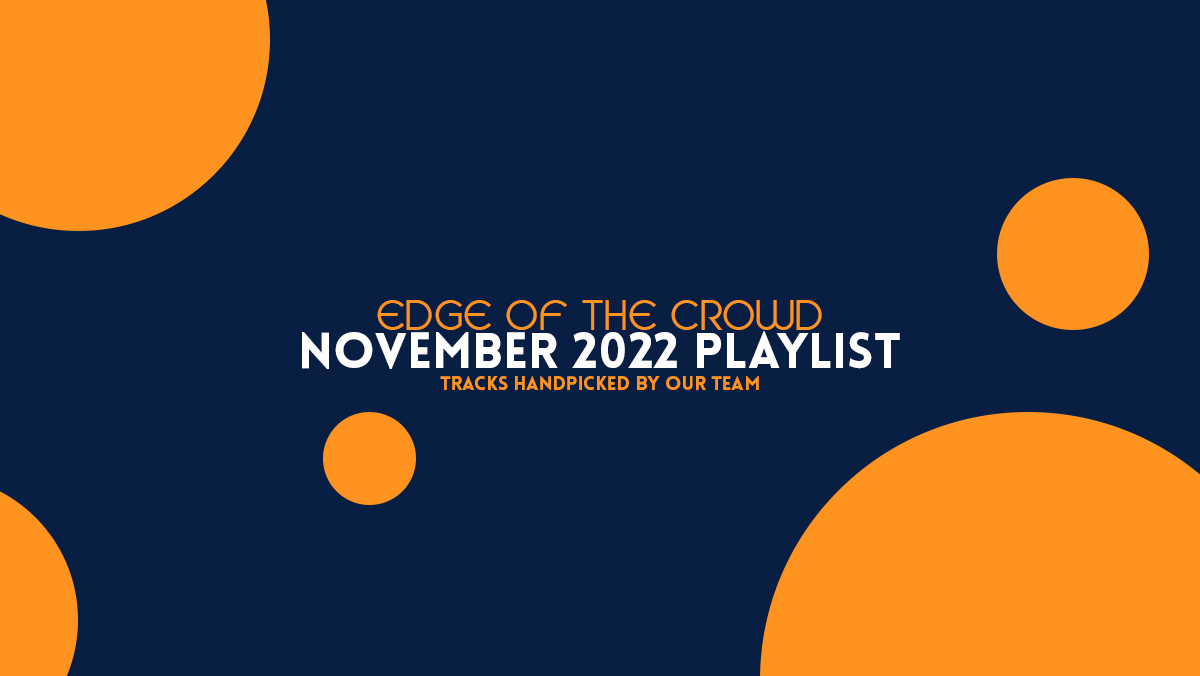 Shore is an album I go back and listen to, over and over again. Fleet Foxes are truly just on a different playing field. This song from Shore, alongside Wading In Waist-High Water, are songs I go back to when I'm feeling a certain type of way about life. God-tier musical talent.

Unstoppable’s been one of my favorite songs since it came out in 2016. For some reason, it’s been playing on the radio extremely often. I am very lazy with adding new songs to my Spotify playlists so after six years I decided it’d be a good time to do so.

All throughout November, I’ve been jamming to this song whenever I’m listening to Spotify. It’s currently fall over here in the US which also brings cooler weather. It’s helped me stay uplifted and in the present.

Mallrat - Wish On An Eyelash

On my list of criminally short songs is Mallrat’s Wish On An Eyelash. What a stunning album opener! Listeners agree, with the song being her most streamed (Spotify) from Butterfly Blue. Wish On An Eyelash is a beautifully written track that lasts for less than a minute, encapsulating longing and adoration in such a short amount of time.

Recently The Chainsmokers showed its love for the song, posting a remix of the track on social media. Although I am personally not a huge fan of dance music, the band's additions to the song are a perfect fit and we can only hope that an official remix will drop.

Grenade Jumper has been quiet for a couple of years now but have launched back into the Australian scene, teaming up with Trophy Eyes vocalist John Floreani for Did You Imagine. John’s voice pops up in the latter third of the track, but sounds different to what’s expected of him. It’s perhaps aided by the dreamy state this track induces, with comforting and complimentary vocals between he and Bianco Davino.

TikTok informs more of my musical taste than it should, but this little banger of a song went viral sometime this month on Tiktok and I have to say – it's such a weird and catchy song and I love it to pieces.

Kate Be Late - My Biggest Regret

Kate Be Late’s debut track was released back in June, with the Melbourne based artist delivering a punch in just 1:44. She’s hit the ground running in the pop/rock scene, barely taking a breath through the short offering that blends everything that pop punk has become in the past couple of years.

This song from the 60s was also introduced to me through the world of Tiktok; and it made me just disintegrate into a million pieces. It's such a beautiful song; however the lyrics are so devastatingly sad that it just rounds off the song into a thing of pure beauty and majesty.

After a pop-punk cover of Taylor Swift’s Anti-Hero popped up while scrolling Instagram, it prompted a search for more from the band. STAY is SoSo’s latest track for the Sydney-based pop-punk group which is a real high-energy song that the five-piece should become more known for aside from its covers.

This song gives me so much nostalgia from being a fan of the original I'm Blue by Eiffel 65. I've noticed artists are bringing back old hits into remixes and I did not expect to love this one the way that I do.

I worked with ESPN for a University of Houston college football game and I got to hear it play throughout TDECU Stadium. The fans of all ages were rocking to it and the song showed a sense of bonding and unity from the two different generations which is why I chose it for this month.

The lead single from her September-released EP, Toronto artist LØLØ teams up with another upcoming giant of pop-punk in Maggie Lindemann for debbie downer, with each vocalist using their distinct talents to bring a grungy and powerful sound. It’s an angsty, angry single that LØLØ appears unapologetic by in the lyrics and setting the tone of the six-track EP overall.

Listen to all the featured songs in our playlist below!