Edge of the Crowd Book Club Review: One Night on the Island

As love-month draws to a close, we review our fiction book for February which was One Night on the Island by Josie Silver. 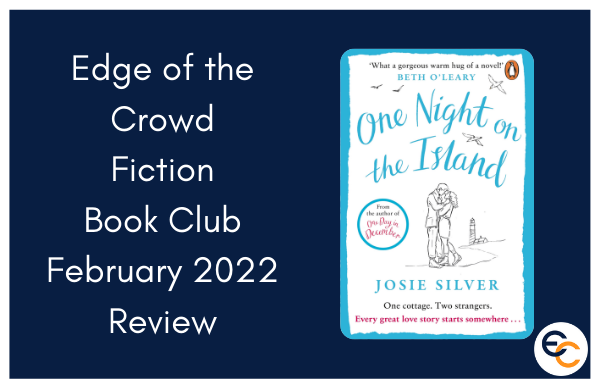 Back with a dose of romance just in time for Valentine's Month, Josie Silver'sOne Night on the Islandwas the Edge of the Crowd's Book Club selection for February and was a lovely, heart-warming afternoon read.

Silver, the New York Times bestselling author ofOne Day in December,returns this month with her third novel and it's another story that could so beautifully be turned into a romantic-comedy film.

The story begins with Cleo, our dating columnist living in the hustle and bustle of London. She is in desperate need of some time away from the city, so her boss sends her to an island off the coast of Ireland to marry herself.

On the boat is where we first meet Mack, an American who "probably goes on SAS adventure holidays for fun". The first interaction between the two is abrasive and foreshadows what will happen when the pair learn their accommodation has been double-booked.

Moving at a fast pace, several days seem to disappear as Cleo and Mack start to accept each other's presence, though, the development of the relationship distracts from the slight jump in the timeline.

While a chalk line is drawn inside to separate their lives, the pair are drawn closer by sharing three things about each other just before they fall asleep at night.

This intimate, daily moment shared by Cleo and Mack reveals more about each character to each other and to us as readers. It adds layers to their stories and develops romantic interest.

These interactions are where we learn about the guarded man Mack, his family and his marriage breakdown. If it weren't for some Irish whiskey and these nightly, sleepy conversations the story of Mack would be spotty and hard to piece together.

One of the best parts of the book is Cleo's character development. Reading it as a mid-20s, single female was both amusing and relatable.

The imagery of the island and its quirks is another highlight. A quaint setting is relatable, especially for someone who doesn't live in a busy city like London and loves a regional getaway.

While we don't see any of Mack's photographs, the descriptions allow us as readers to generate our own vivid images and you can just imagine the beautiful countryside, featuring the 'mountain' - think the country scenes in Leap Year or even Normal People.

One of the main storylines of the book is the lead up to, and the day of, Cleo's ceremony where she will marry herself.

The concept of marrying oneself is at first a somewhat strange thing to understand and seems like an odd addition to the holiday romance, however, it is quite possibly what makes the book different from any other.

While the initial descriptions of the day make it seem trivial and just for the purpose of getting online clicks for the magazine, the day becomes a celebration of Cleo, her independence, happiness and pride in herself.

Others might not understand what Cleo is doing, but they show their support and provide symbolic items to make the day more special.

The 'ceremony' day becomes an empowering part of the book.

One Night on the Islandhits the mark with an escapist, dreamy romance that teleports you to Salvation Island.

Silver treats readers to a holiday romance, the perfect, easy afternoon read for the beach or curled up inside, hiding from Irish-like weather.