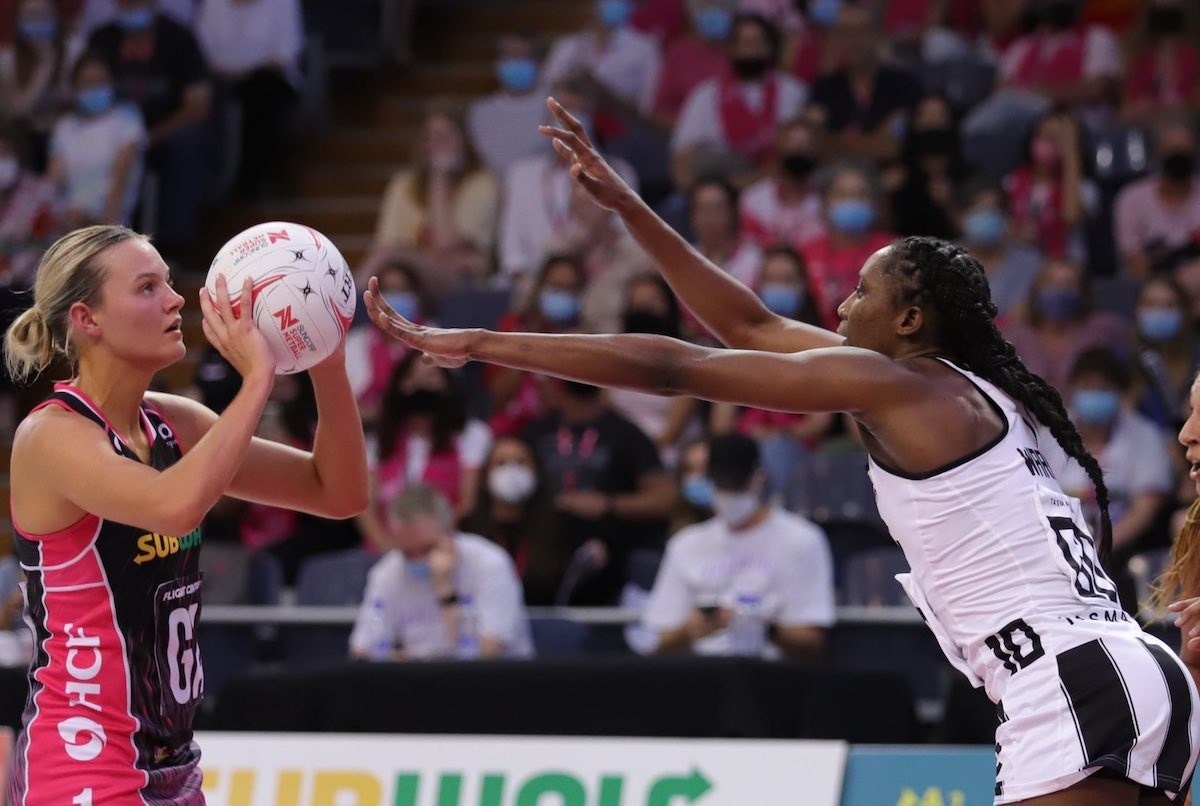 The Adelaide Thunderbirds have started their season off with a strong four goal win over the Collingwood Magpies, showing their eagerness to exploit the Supershot with the accuracy of Tippah Dwan and Georgie Horjus.

On the other hand, the Magpies waited until right before the buzzer to drop two through. The impact of the Supershot left the Magpies behind in the contest and on the scoreboard.

The biggest change from the Thunderbirds' 2021 line-up in their opening starting seven was the move of Horjus out to wing attack, with ex-Firebird Dwan taking the goal attack spot.

Speaking post match, Thunderbirds coach Tania Obst was clearly thrilled with the addition of Dwan to her side.

"I love it. It just allows us to play quite a different style, and with the two point there, and we know that Tippah (Dwan), in her year at the Firebirds, was exceptional in that.

And she plays a smart goal shooter game [too]. We don't just necessarily put her in there to shoot the two-pointers, she actually just plays quite a very traditional moving shooter role. And if she lands in that two-points well, she's probably pretty confident to put the ball up."

In the opening game of the Super Netball season, it didn't take long for Lenize Potgieter to put up her 1000th Super Netball goal, working in combination with Dwan to throw the Geva Mentor and Jodi Ann Ward defence off.

Two supershots put up by Dwan extended the Thunderbirds' lead going into the first break.

Collingwood went on a run of three goals in the second quarter though, pulling the deficit back in, as some poor passing to players not in position put Adelaide under the pump.

While the home side got back on track, Collingwood first made the change, bringing Gabby Sinclair on for Garbin. The switch brought more success under the goal post.

After the match, today's coach Kate Upton (filling in for Nicole Richardson - COVID-19 protocols) said this change was needed to improve the decisions in the goal circle.

"Sophie (Garbin) fatigues, she's transitioning into that goal attack position and she hasn't played it for the full 15 minutes of every quarter. So, just once that fatigue set in, the decision-making changed on Soph and we had to get the fresh legs in there," Upton said.

Shamera Sterling and Wilson both had two intercepts each at half-time, and continued to take their opportunities, but the old 2021 poor conversion was back with the front-end unable to finish off the job on multiple occasions, becoming "wasteful" with the ball.

"I thought we were a bit wasteful with the ball, and the Magpies put on a slightly different defence and we just didn't really adjust to that or pick it up early enough and we just started to go away from what we knew. And we got a bit sloppy with some of our skills, and we picked that up after half-time," Obst said.

Adelaide messed around with the ball in its attacking end, especially in the final five minutes of the quarter, when the players were looking around for the two-point shot, but it was being well covered by Mentor and fresh legs in Jacqui Newton.

At half-time, the contest was fairly even, just one goal difference, enticing Tania Obst to make some moves from the bench.

The first was the switch at goal attack. Horjus went into the goal circle and Elle McDonald came onto the court at wing attack.

Ward was certainly challenging the Thunderbirds' movement into their front half with her match-up against McDonald, but it was to little avail, as the lead remained at three with one quarter to play.

Garbin returned at goal shooter shortly into the fourth quarter, and while the Thunderbirds made some coach-killer errors that brought the margin back to three, the Magpies kept on fighting.

Dwan came on once again, at goal shooter for the Power 5, and combined with Horjus for strong, and smart, offensive play.

The Magpies really fell further apart in the final stages of the game, with wayward passes and over passing across the goal circle causing turnovers that allowed the Thunderbirds to stretch their lead out to eight.

Finally, in the last 35 seconds, Sinclair put up two two-point shots that brought the margin in to four, and in a year when we're expecting ladder positions to be decided by goal difference, that shorter margin looks a whole lot nicer.

Collingwood's unwillingness to take the Supershot until that point was an interesting tactic, but one the team will look to improve, because as Upton said post-game, "it's a killer, isn't it?"

"When you've got obviously two very accurate two point shooters in Tippah (Dwan) and Horjus. I thought our defenders in that last bit really did try and shut it down, and really try and restrict their opportunities to have the two point shot."

After Dwan put through two a the end of the first quarter, the Magpies looked to a different combination and different tactics in the second, and on came Newton.

OVER A THIRD – ROUND ONE PREVIEW

While Obst was thrilled with the way the Thunderbirds played in their attacking end, she had positives to say about the other combinations on court, especially when it came to one of her defenders.

The impact of Wilson at the defensive end was applauded by Obst, who had the biggest smile on her face as she spoke about the impact of the Jamaican and her growth since she started with the club a little over 12 months ago.

"She's been training the house down and it was sort of touch-and-go as to whether she started or not," Obst said.

"And I felt Tilly (Garrett) was in the game, for sure, and then I just felt, well myself and Cathy (Fellows) felt that maybe we needed to just inject a different type of player, which Latty (Latanya Wilson) has for us.

"Her athleticism and her speed and power off the mark was exceptional and she got to some balls that I'm not sure the opposition were expecting her to do, so she has, 12 months, the growth in her game as been exceptional."

The Collingwood Magpies return to John Cain Arena next Sunday, where they'll face the West Coast Fever. The Adelaide Thunderbirds are also back in action on Sunday afternoon, hosting Giants Netball.