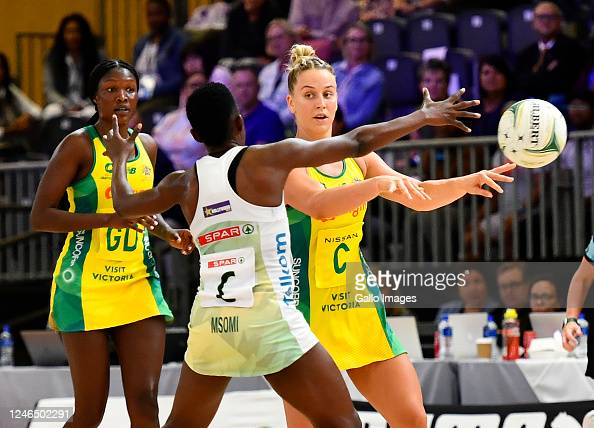 Diamonds on track for five-series streak after beating Proteas

The Australian Diamonds are looking to win their fifth Quad Series in a row against the New Zealand Silver Ferns in the final tomorrow.

Diamonds on track for five-series streak after beating Proteas

The Australian Diamonds are looking to win their fifth Quad Series in a row against the New Zealand Silver Ferns in the final tomorrow.

Ending the round-robin games three-for-three, Australia sits on top of the table. In the earlier game, New Zealand beat England to seal its place in the final against Australia.

South Africa kicked things off, but it was Australia who first broke the score flow. Some early misses gave South Africa a chance to steal possession but were unable to keep their hands to take the lead.

With both Liz Watson and Steph Wood rested during today's game, Paige Hadley and Courtney Bruce were the Diamonds' captain and vice-captain respectively. In Wood's absence, Australia's starting goal circle was Sophie Garbin and Kiera Austin.

To end out the first quarter, Ine-Marie Venter shot a long bomb after the whistle. Trailing 15-18, the Proteas were still very much in the game. Historically, the team has never beaten Australia, with the closest score difference being two.

Unfortunately for viewers, the game's second quarter was cut in half due to broadcasting issues. When the stream returned, the score was 20-28 in favour of Australia. For the second quarter, Australia made no changes, whilst Khanyisa Chawane came in at wing defence for the Proteas.

South Africa was spurred on by the crowd as they scored three in a row. Australia quickly responded, with a run of its own. Broadcasting issues continued just before Tara Hinchliffe made her debut at goal defence.

Come half-time, Australia led 35-28, with a 17-13 quarter. Possession during the first half was fairly even, with the Proteas' holding the ball for 48 per cent of the play.

Both teams wrung in several changes for the third quarter. Karla Pretorius and Phumza Maweni formed a new Proteas defensive end, whilst Australia made changes in all areas of the court.

Bruce, Dwyer, Jamie-Lee Price and Kate Moloney all took bibs for the first time in the game to start the second half.

Australia continued to pull away, thanks to "Sophie-Squared's" accuracy and a rare miss from Venter. Halfway through, the difference was eight goals, with the Diamonds looking air-tight. Sunday Aryang rejoined the game, this time in wing defence.

The score was really getting away from the Proteas by then, cracking the double digits. This was partially thanks to Sophie Garbin's goal shooting percentage, which reached 90 per cent.

To end out the game, the last player ob the Australian bench, Cara Koenen, came in at goal shooter. In a rare move, Kiera Austin came in at wing attack, valuable practice for her less preferred position. Another debutant took the court, with Sesandile Ngubane shooting alongside the experienced Lenize Potgieter.

Despite the loss, South Africa was able to end on a high note, with some valuable gains and the smallest margin since the first quarter (four goals).

"The girls around me made the job a little bit easier. South Africa was a really tough match.

"[I] got a bit of goal attack and wing attack in there and [am] just happy to walk away unscathed."

England and South Africa will play on Thursday at 1:00 AM AEDT, followed by the grand final at 3:00 AM.