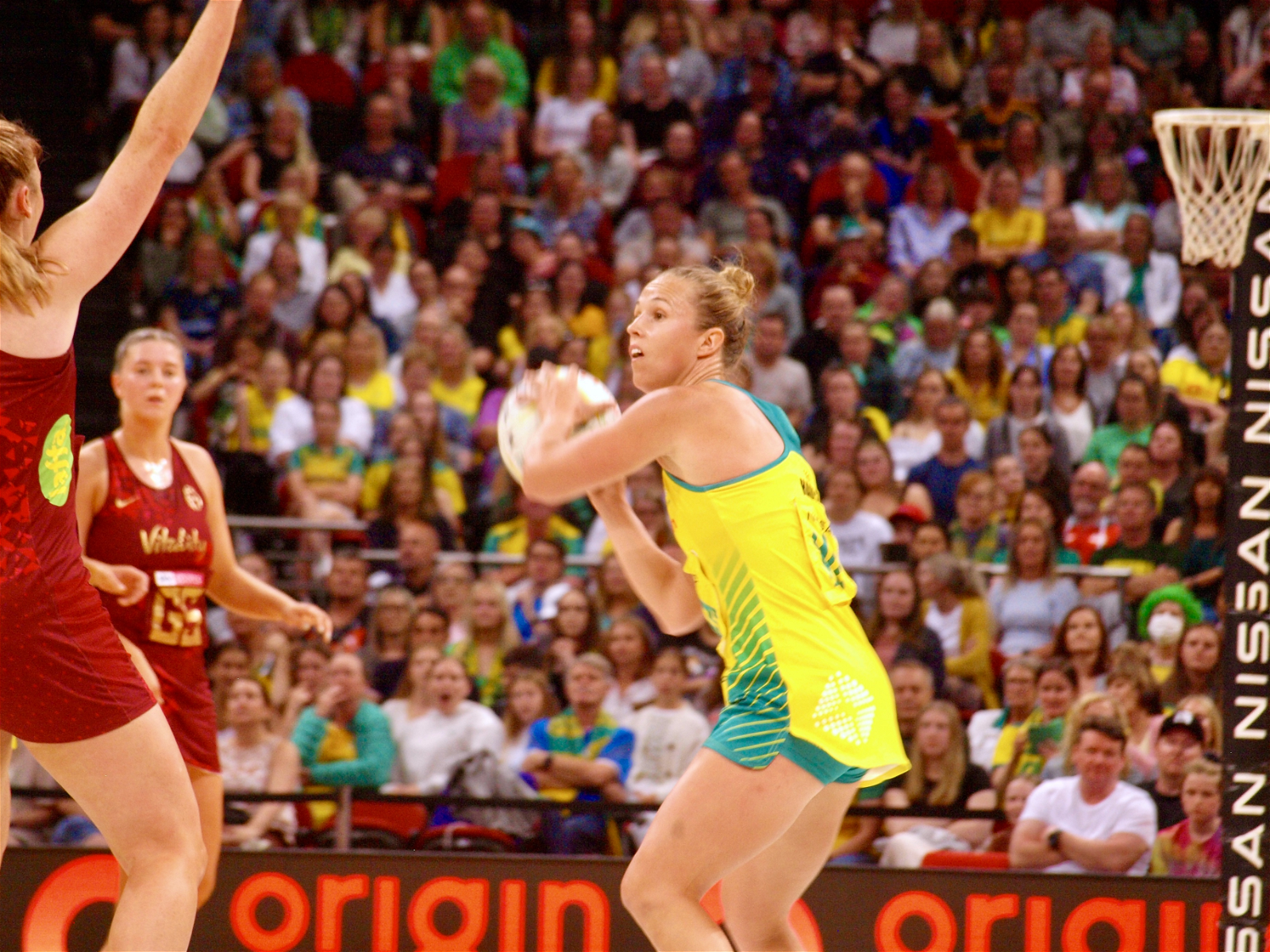 The Diamonds picked up where they left off in their last international performance, beating the English Roses.

The Diamonds picked up where they left off in their last international performance, beating the English Roses.

Before the match started, Australia was throwing surprises around, with star wing defence Ash Brazill not picked in the gameday squad, and Sunday Aryang given the starting goal defence bib.

England drew first blood, forcing a held ball call on the first centre pass that the Australians had, and immediately taking the opportunity to get in front.

The Roses built a lead, as the Diamonds were unsettled early, particularly Sophie Garbin, who didn't find her rhythm until later in the game.

Jade Clarke was in command of the attack end for the Roses, and Elle Cardwell dominated in the circle in the first quarter, with a steady supply of ball that suited her.

Australian keeper Courtney Bruce had a late intercept, but it wasn't enough to score a last-second goal, and the Australians trailed by four goals, 18-14 at quarter time.

The Diamonds started the second quarter in similar fashion to the first, with a number of elementary mistakes giving the Roses opportunities. It didn't last though, as the Australians started to find the pace of the game early in the second, reducing the gap to two goals in the first five minutes of the quarter.

Poor shooting continued to nag the Diamonds, as Steph Wood and Sophie Garbin didn't have the radar on song, and were not able to capitalise on turnovers further down the court.

Bruce won an offensive contact call against Cardwell late in the second quarter, and took the opportunity to help the Diamonds close the gap, and get under the skin of the English shooter. It was her final act before being moved to goal defence, as Sarah Klau was introduced into the game.

The Diamonds drew level with just under 90 seconds remaining in the second quarter, and were able to take a lead about 30 seconds later. The Roses would force another turnover, and take a one goal lead of their own into half time.

Coming out of the half time break, the tone had shifted, as the Australian machine had found its gear, while the Roses players were trying to hold back the damn. Fadoju on her own had five gains by the early part of the third quarter, while the rest of the team had combined for one.

Funmi Fadoju turned over the first Australian possession of the second half, and the Roses stretched the lead again.

Kiera Austin was introduced for Steph Wood midway through the third quarter, and Austin immediately had an impact, pouncing on an opportunity created by Jamie-Lee Price.

Imogen Allison was called for her second held ball of the quarter, moments later, as Australia looked to be firing on all cylinders, setting up a lead of three goals with three minutes left.

Jess Thirlby was forced to pull Natalie Metcalf from the court, introducing Chelsea Pitman to try and combat the stifling Australian defence. The first possession didn't yield any improved results for the Roses, and the Australians appeared to be flexing their muscle and pulling away.

Funmi Fadoju was substituted off, and the Roses struggled to win back ball as long as she was off court. The score was 40-37 (Australia leading) when Fadoju left the court, and when she returned midway through the fourth, the score was 53-46, the lead having blown out beyond repair.

A 17-9 third quarter gave the Australians a six goal lead at the end of the third quarter, with the defensive end firing on all cylinders and seemingly turning the ball over at will.

Australia had the first two goals of the final quarter, as the lead continued to stretch. The Roses stopped the lead from getting out of control in the early parts of the fourth quarter, with Imogen Allison winning a crucial turnover.

Fadoju was reintroduced, and had an immediate impact, winning a turnover and starting to bring the Roses back from the brink. She won another turnover two possessions later, but the Australians had the firepower further down the court to nullify her work.

Sophie Drakeford-Lewis entered at goal attack with four minutes to play, and helped whittle down the lead, while Fadoju continued to win ball at the back. It would prove to be too little too late, as the Roses were still six goals short, but showed enough late fire to have caused concern at the end for Stacey Marinkovich.

The final score, 61-55, was reflective of Australia's ability to execute at a high level for longer periods of the match, particularly in the midcourt working to reduce turnovers.

In the aftermath, Roses fans will be wondering why Fadoju was removed from the game, given that the score blew out while she was off the court, and she finished with seven gains (the team had 10 total) and four intercepts (five).

Fadoju's time off court coincided with the match slipping away, while Jess Thirlby was unable to swing the right changes.

There will also be concerns about Natalie Metcalf, who had just 17 feeds for the match, compared with Liz Watson, her opponent, who had 41 feeds. Granted, Metcalf only played 40 minutes to Watson's 60, but part of that was also reflective of her ineffectiveness.

On the Australian side, it was clear that the combination of Sarah Klau and Courtney Bruce continues to be very effective, and with Jo Weston missing the series, that combination will carry the Diamonds towards the hopes of retaining the title.

Further up the court, the combination of Sophie Garbin and Steph Wood didn't shore up concerns, as Wood shot at 72 per cent, and had just two more goals and two more goal assists than Kiera Austin, despite playing almost double her playing time.

Garbin's 90 per cent shooting accuracy was not quite the international standard that it has been previously, but she will likely have more game time to settle in over the rest of the Quad Series.

The Diamonds take on the New Zealand Silver Ferns tomorrow morning at 3:00am AEDT.