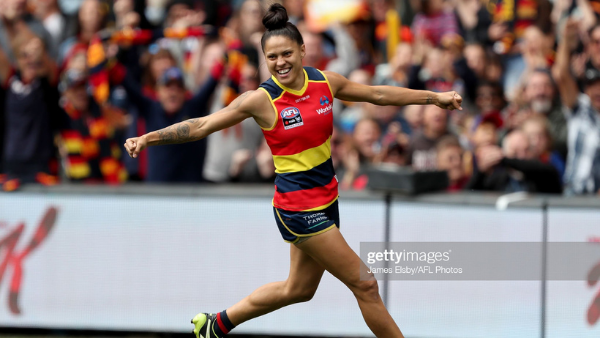 Sarah Allan and Stevie-Lee Thompson will notch up game 50 in this weekend's Preliminary Final with the pair being at the Crows since the first season in 2017, as well as the pair being two-time premiership players with the club.

Allan, who has captained Adelaide for most of this season in the absence of Chelsea Randall said that she didn’t give the milestone much thought until the Crows celebrated Ebony Marinoff’s milestone.

“I probably didn't l think about it too much like ticking off each game and it probably didn't make me realise it [the milestone] until obviously having Ebony Marinoff having her 50th game and being a part of that and seeing what she's done for the game,” Allen said.

“I think it sort of made me reflect on how far we've come, like six years to be in the competition, and it probably didn't hit me to think about playing in a 50th game.

“It's sort of crazy because obviously, we've played less games each year. So it's probably a bit more significant than just 50 games.

“So yeah, it's pretty crazy and I think just for me, I'm just so thankful for how far we've come in AFLW and to see the young girls coming through.

“They have a pathway now and it sort of just makes you realise how special it is to be part of what we're doing. It'll just be another special milestone, but at the end of the day it's a final and it will be more important to think about the game and not just my individual milestone.

“So that will be my main focus just playing my role for the team as I try to do every game.”

While not much can beat the two premierships as a  highlight for Allen, seeing the impact the AFLW has had on young girls is up there.

Yeah, obviously those whenever I get asked about that. It's definitely the premierships for me. With the milestone and being able to reflect on how far we've come in six years.

“I think for me, it's when you see young girls at clinics and stuff like that or at a  game and now they have role models to look up to and I think there's more moments like that when we’re able to interact with the public again.

“I think just those small things seeing girls kicking a football with their dad and their brothers when usually it would just be a dad and a brother kicking a footy.

“For me, that's probably the thing that stands out the most.”

LIONS DOMINATE DEPLETED MAPGIES TO FACE DEES AT THE ‘G

Thompson wasn't an AFL supporter growing up instead following the NRL and Rugby league, looking back she can’t believe where she is now.

“I was never an AFL supporter,” Thompson said.

"I was rugby league and rugby union and seeing myself here six years later to be selected by the crows, It's amazing and I never thought I'd be playing 50 games next week, that's for sure.

Having that opportunity with a lot of girls like Noffy [Ebony Marinoff] and then obviously Sarah Allan next week as well with me.

“I get to share that with her and it's a special moment.”

Thompson joined the club's leadership group this season which is a testament to her growth since arriving at the club towards the end of 2016.

“I look back on photos and seeing how tiny I was and a lot of people actually speak to me and say how much I've grown as a person and as a leader.

"I'm lucky enough to actually be in the leadership squad, but I definitely think I've grown a lot.

“I didn't really talk much as much as I do now. But yeah, it's amazing to see the amount of growth that I've had and especially all the other girls as well.”

Like Allan, the premierships are right up there with her career highlights but nothing beats walking into the club and being around her teammates.

“I think my highlight is walking in through this door and seeing all the amazing athletes and female athletes.

“Obviously we don't really see the males at the moment but seeing how many amazing athletes there are in this club and all the support staff and everything like that. That's probably my highlight walking into the club and seeing all the happy smiles and seeing everyone together.”

Since joining the Crows as coach in 2019, Matthew Clarke has seen first-hand how much of an impact the pair has on the side.

"Obviously, both massive parts of our team, we celebrated Ebony's 50th really hard when she got to that milestone but these two are equally as significant.

"Sarah captained the side for the majority of the season in Chelsea's absence, Stevie is in the leadership group this year.

"She's been a leading goalkicker in the league now and doesn't play down there as much but they're both just really pivotal figures in our group and they have great influence.

"Now if we contemplate what the group looks like moving forward, I think their influence already is going to be really significant in terms of the way they've brought young players through and Sarah is only a very young player anyway.

"So we're really really pleased for them and you know, you know obviously acknowledge that milestone when it ticks over, but the great thing is that you know, we've had one now we're having another couple and as the seasons roll on, this will become the norm which is great.

The Adelaide Crows will take on the Fremantle Dockers at Adelaide Oval for a place in the 2022 AFLW Grand Final with the first bounce at 2:40 AEDT.