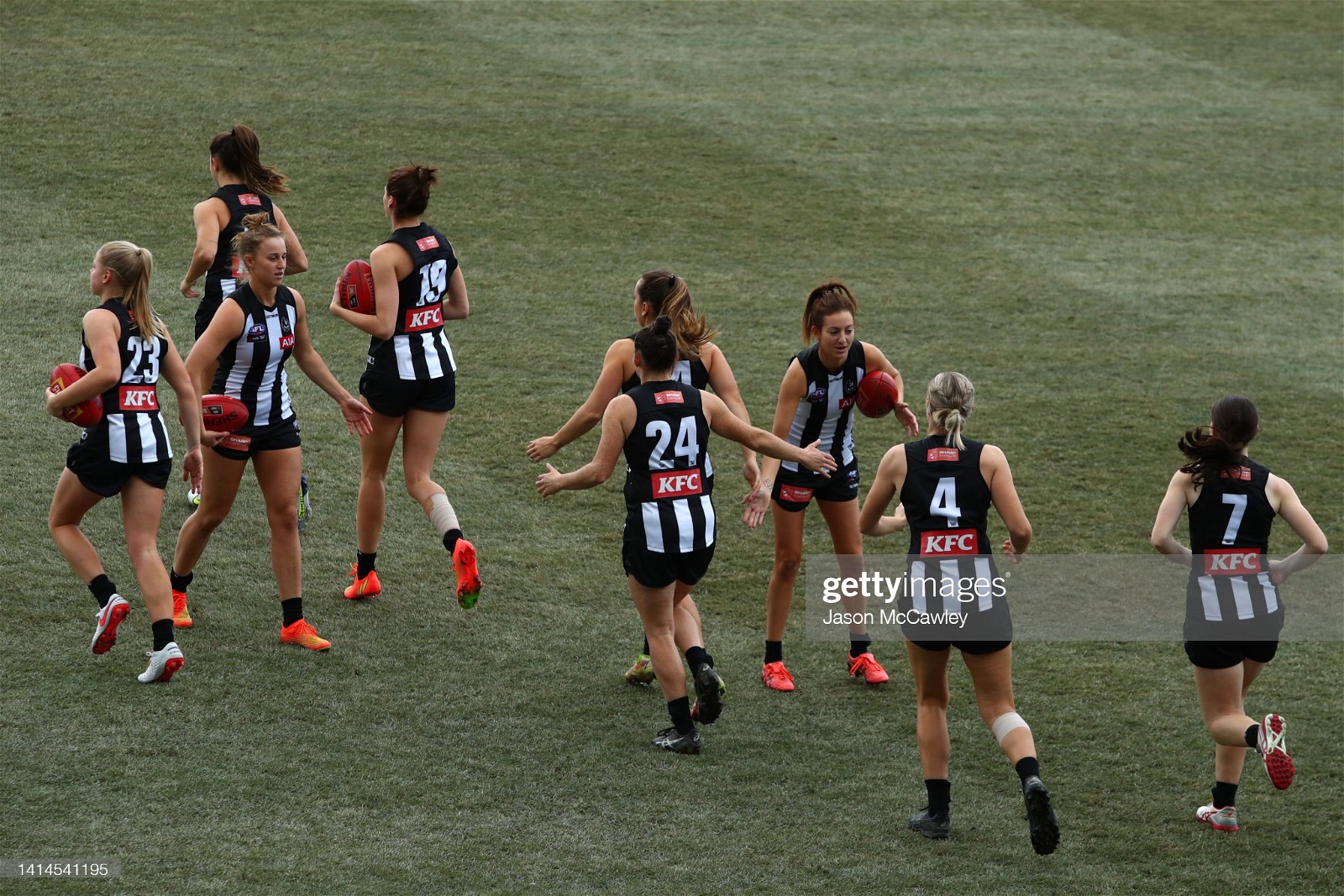 The Collingwood Magpies are set for an exciting season, with plenty of depth and versatility in their squad. Can they soar in 2022?

The Collingwood Magpies are set for an exciting season, with plenty of depth and versatility in their squad. Can they soar in 2022?

The magnets have been shuffled a little ahead of Season Seven for the Magpies, as some players prepare to take on new roles and new recruits settle quickly.

Led by co-captains Steph Chiocci and Brianna Davey again in the second instalment of AFLW for 2022, there’s a lot to like about this Magpies side.

After losing a few players to expansion sides, the Magpies have put their heads down and are focused ahead of Season Seven.

They are still without Brianna Davey and Brittany Bonnici for this season, both suffered ACL injuries last season in Rounds One and Eight, respectively. It is also unclear when, or whether, Ash Brazill will return after she missed Season Six to focus on netball ahead of the Commonwealth Games.

It was a strong performance from the Magpies in their preseason hit-out with new side the Sydney Swans, as they kicked away to a 30-point win.

New recruit Olivia Barber was particularly impressive, kicking two goals and looking right at home in black and white after moving from the hoops.

In Season Six, the Magpies had an impressive start with three wins on the trot, beat the likes of the Eagles and the Bulldogs mid-season, and finished off strong against the Tigers.

Ahead on the win-loss ledger, the Magpies made finals for the third straight season.

Disaster struck, though, on the eve of the finals series and their qualifying final was postponed by eight days due to a COVID-19 outbreak among the group. When the match with the Lions was played a week later, they were far too strong and the Magpies’ season ended with a 50 point loss.

Delivery into the forward line lacked class without Davey in the midfield, and when sides are scoring big in the AFLW, you need strong transition footy to be able to keep up.

Steph Chiocci also had an achilles injury that kept her quieter in Season Six, and positive ball-user Joanna Lin was ruled out before the season began, leaving it up to too few to transition the football.

Aishling Sheridan was one player who moved into the middle to help out, especially following Bonnici’s injury, and, if the preseason game against the Swans was anything to go by, she will spend plenty of time in there this season.

The midfield depth at the Magpies has been building in recent years, and they’ll be thankful for the work that’s been put in.

In Season Six, the Magpies showed their ability to adapt when Davey went down in Round One, and players such as Jamie Lambert and Bonnici (until her own ACL injury) stepped up.

With Bonnici and Davey ruled out of the season, the Magpies will be drawing on experienced heads and emerging players, and there are plenty of them.

Lambert and Mikala Cann will be supported by the likes of Chiocci, former Blue Lauren Brazzale and young gun Tarni Brown - who found a lot of the footy against the Swans.

They’ll also be coached this season by former AFL player Jordan Roughead, who is taking on more responsibility as a senior assistant and midfield coach in Season Seven.

Finals appearances have become the norm for the Magpies, however, they are yet to make a big dance.

In 2020, they made the semi-finals, but fell short of the Kangaroos by two points.

A year later, they improved this with a qualifying final win to set up a preliminary final with the Lions, where they fell a kick short of the eventual premiers.

But in 2022, battling a COVID-19 outbreak and suspensions to some key players, they were whacked by 50 points in a disappointing end to the season.

They’ll be pushing for finals again in Season Seven, but can they find ways to finish off the big games?

With injuries to midfield stars, opportunities open up for young players to step up into on-ball roles. One player who should be in the mix is Charlotte Taylor.

Taken at Pick 30 in the AFLW draft, Taylor was already a familiar face to some of the team after she played three games in the Magpies VFLW team this season.

The 18-year-old averaged 14 disposals in the side’s midfield across the three matches, and showed she can rotate forward and be a marking option.

Taylor is a versatile pick-up from this year’s draft crop and could rise this season.

Collingwood’s depth and versatility this season is particularly exciting, with young players emerging and the likes of Sabrina Frederick set to change up the team dynamics, spending time in different positions.

It will take some hard work and adapting each week, but yet again Collingwood should be around the mark for a top eight finish and finals berth.