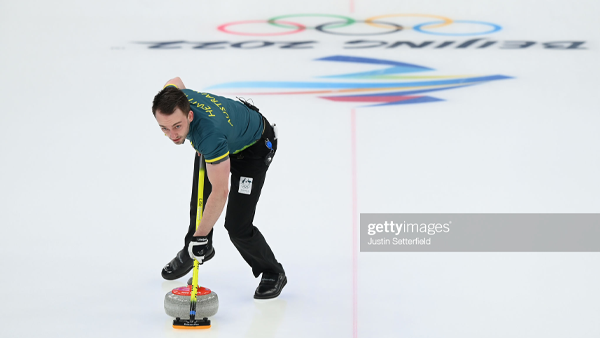 Tahli Gill and Dean Hewitt debuted in Australia's maiden foray into curling at the Winter Olympics, while the qualification stages for Alexander Ferlazzo in the luge began on Day -2 of Beijing 2022.

Tahli Gill and Dean Hewitt began Australia's Winter Olympics curling tournament with a devastating 6-5 loss to the United States' Vicky Persinger and Christopher Plys that all came down to the final rock's delivery.

Australia was off to a good start through Gill's opening delivery, the rock landing inside the inner ring of the button as the Australian pair looked to put some pressure on their opponents with some strategically placed rocks. With each team attempting double take-outs as the first end was drawing to a close, Gill found success with the final delivery of the end, picking up the first point of the match.

The United States grabbed a point back after the second end by holding the closest position to the button, but Australia claimed a point from the third end that came from a resulting take-out. Each side's rocks needed to be judged to determine who's was closest, with the point ultimately being awarded to Gill and Hewitt.

The point-for-point nature of the match continued throughout the fourth end as Persinger and Plys took out much of the Australian rocks, and a final delivery by Gill to perform a double take-out was unsuccessful, missing everything and going through the house. Persinger attempted to draw her final delivery nearer than the closest Australian rock for more points but had to settle for one.

The United States squared the score up once more when it picked up two points from the seventh end after Persinger executed a successful double take-out on the last stone, pushing any Australian rock off the house and leaving two United States rocks in the vicinity.

Coming into the eighth and final end, Gill, attempting a clearing, the delivery fell to the side of its target, unable to make contact with the United States' rock as planned, leading to a narrow loss as Persinger and Plys picked up the match-winning point.

Gill and Hewitt have two matches on Day -1 of Beijing 2022, first against China (who won 7-6 against Switzerland in Session 1) and the Czech Republic (who also won 7-6, against Norway to start proceedings).

Alexander Ferlazzo has completed two training runs in the luge in preparation for the proper competition to begin on Saturday February 5.

Throughout Run 1, Ferlazzo was the 13th athlete to have a go at the course, finishing his first attempt in a time of 1.00:113 with a top speed of 115. km/h. The result placed him in 14th among the 18 riders in total, 2.281 seconds behind the fastest time, that of Italy's Dominik Fischnaller.

The next training runs for Ferlazzo and his fellow competitors in Group B will take place from 6pm AEDT on February 3 with Training Run 3 and 4.