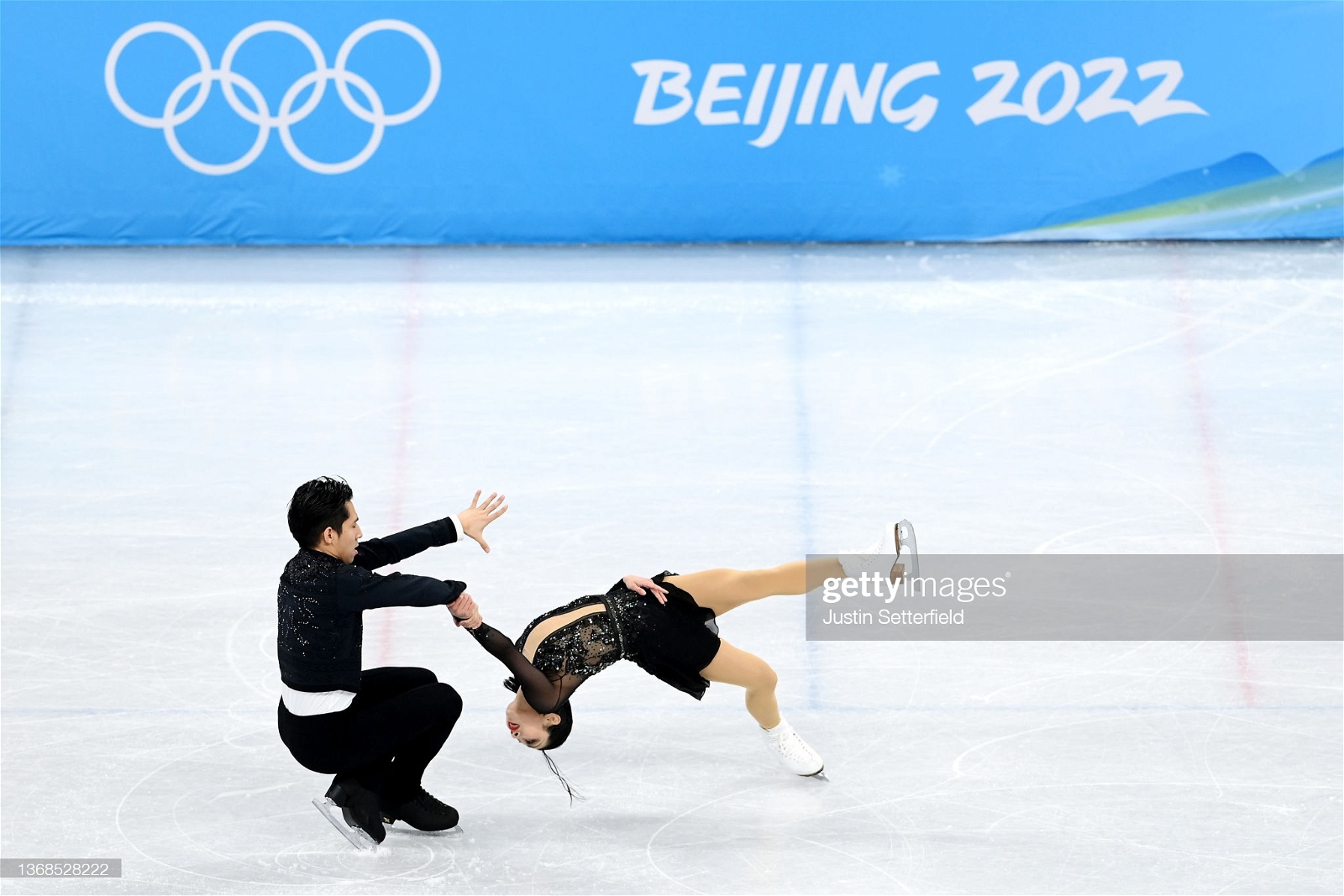 Competition came to an end early on Day 0 ahead of the Opening Ceremony, with curlers Dean Hewitt and Tahli Gill as the only Aussies competing. But there was plenty of action on today.

Competition came to an end early on Day 0 ahead of the Opening Ceremony, with curlers Dean Hewitt and Tahli Gill as the only Aussies competing. But there was plenty of action on today.

Competition came to an end early on Day 0 ahead of the Opening Ceremony, with curlers Dean Hewitt and Tahli Gill the only Aussies competing during the day. However, there was still plenty of action with the Figure Skating Team Event commencing today.

More close calls in the Curling

The Aussie curlers were unable to get a win on the board in their first match today, facing the Swedish pair of Almida de Val and Oskar Eriksson.

It was a tight first end with the scoring stone coming from the fourth shot and it was Gill's first shot that kept them at bay preventing any more points on the board.

They got on the board in the second end managing to score one point, however, the third end did not go to plan and the Swedish scored a double despite de Val going too heavy on the draw shot and it passing the circle, missing out on three points.

The Aussies had to be happy to only have a single point stolen from them in the fourth end, with Gill's hammer shot resulting in a jam that knocked out one of the Swedish stones and stopped inside the red. Had she missed the shot altogether, the Swedish would have scored four points and damaged Australia's chances entirely.

Gill again slowed the damage in the fifth end, only allowing the Swedish to steal one point with her final shot and for the sixth end the Australians brought in their powerplay. It wasn't the perfect end but they came away with a triple to bring the scores to 4-4.

However, the Swedish returned fire scoring a triple in their power play on the penultimate end, with a double takeout shot on the eighth stone from Eriksson setting them up.

The Australians couldn't have played the final end much better but the three needed to send the match to extra ends was too much to overcome, only managing to score a double when the take out shot knocked out one of the stones they were attempting to keep in.

This was Gill and Hewitt's fourth loss of Beijing 2022, and the third within one point, with the final score sitting at 6-7.

The Australians faired slightly better in their second match of the day against the current world champions, Great Britain's Jennifer Dodds and Bruce Mouat.

It was one stone that was the difference between going one point down and four points down in the first end, with a well-placed stone from Dean Hewitt just kissing the button and hiding behind another stone from the British.

They didn't fare quite as well in the second end with the British stealing a point after Gill's take-out hammer shot jammed and kept the stone inside the button. They finally got a point on the board in the third end but it was a rough fourth end for the Australians giving up three points to sit at 6-1 at the halfway point of the match.

The Aussies called their power play in the fifth end and it paid off, scoring three points after Gill knocked out the British's stone to score three points and they managed to score a double with a steal in the sixth end to level the scores at 6-6.

The Brits played their powerplay in the penultimate end but it wasn't as lucrative as the Aussies powerplay, only managing to score a double.

Unlike the first match of today, the Aussies managed to do enough to force the match to extra ends. Not having the hammer, it was a tough ask to win in extra ends for the Australians and a heavy draw shot from Gill that went well past the circle gave Great Britain the match, with the final score coming in a 9-8.

The Men's Short Program kicked off the Figure Skating Team Event for Beijing 2022 and there was a mix of results as has become typical in men's skating in recent years.

Germany's Paul Fentz got the competition underway, scoring 68.64 points after Ukraine's Ivan Shmuratko returned a positive COVID test and the Ukrainians lacked a replacement athlete. Canada's Roman Sadovsky was second to skate, making his Olympic debut after never having competed at a World Championship event prior to the Games, it was a nervous start for the Canadian scoring 71.06 points.

Then came four-time Olympian Michal Brezina (CZE) who recovered from a poor start to score 76.77 points. Home nation favourite Boyang Jin was the last to skate in the first group and was able to land the first successful quad jump of Beijing 2022, landing a 4Lutz+2Toeloop, however, he fell on his second quad jump a 4Toeloop and scored a total of 82.87 points.

ROC's Mark Kondratiuk was first up in the second group, producing the first clean skate of the Olympics so far scoring 95.81 points. 2018 Olympic silver medalist Shoma Uno produced his best short program in the past four years and the score reflected it earning a total of 105.46 points achieving a career-best.

Georgia's Morisi Kvitelashvili was able to execute a clean program to score 92.37 but the big winner was the United States' Nathan Chen who was 0.09 points shy of breaking Yuzuru Hanyu's World Record, scoring 111.71, getting well-deserved redemption after the heartbreak in Pyeongchang.

Lastly was Italy's Daniel Grassl who managed to land all of his jumps despite receiving an edge call and a rotation call on his 4Lz, in the end, he score 88.10 to put Italy in fourth after the short program.

There was a big upset in the Ice Dance Rhythm Dance event with the United States taking the max points, making the gold medal hunt for the team gold starting to look more interesting.

Japan's Misato Komatsubara and Tim Koleto got the event underway, scoring a 66.54 just one and a half points off their personal best but it would be a long wait to see how it would fare in the rankings.

Sibling pairing of Natalie Taschlerova and Filip Taschler (CZE) were second on the ice and put up a comfortable score of 68.99. Germany's Katharina Mueller and Tim Dieck's Joker Rhythm Dance didn't hit the same way it did earlier in the season and only scored 63.21 points while the Georgian team, Maria Kazakova and Georgy Reviya looked happy with their Olympic debut scoring 64.60.

The final team in the first group was Ukraine's Oleksandra Nazarova and Maksym Nikitin, who were the first Ukrainians to compete in the team event but couldn't put up a big enough score - 64.08 -, to make up for the points lost in the men's singles.

The second group included some of the best Ice Dancers of the last four years and kicked off with China's Shiyue Wang and Xinyu Liu who put together a clean program to score 74.66. The United States' Madison Hubbell and Zachary Donohue looked better than ever at their final Olympics and scored 86.56 to sit comfortably in the lead.

Canada's best, Piper Gilles and Paul Poirier were the second team to score over 80, earning 82.72 points and Charlene Guignard and Marco Fabbri (ITA) narrowly beat them with a score of 82.83. Last up was ROC's Victoria Sinitsina and Nikita Katsalapov, who were favourites to win in the Rhythm Dance but had a few errors that caused them to score 85.05 points.

Lastly was the Pairs event, the only event to have a World Record score which came from the 2018 Olympic silver medallists Wenjing Sui and Cong Han.

Ukraine's Sofiia Holichenko and Artem Darenskyi made the most of their sole Olympic performance but had several errors to score a 53.65, and Julizaveta Zukova and Martin Bidar (CZE) also couldn't put together a clean program and scored 56.70. Rounding out the first group was Georgia's Karina Safina and Luka Berulava who built off their career-best performance at Europeans to score 64.79.

Americans Alexa Knierim and Brandon Frazier stunned in the second group scoring 75.00 and the Japanese pair of Riku Miura and Ryuchi Kihara was less than a point behind with a personal best scoring 74.45. Italians Nicole Della Monica and Matteo Guarise finished off the second group but couldn't put up a clean program to only score 60.30 points.

There were some big names in the final group and Canada's Kirsten Moore-Towers and Michael Marinaro got things started, making a few errors to score 67.34 finishing in fifth. Wenjing Sui and Cong Han were near flawless to reclaim the Short Program World Record scoring 82.83.

Anastasia Mishina and Aleksandr Galliamov would have set a new World Record if it weren't for Sui and Han, earning a personal best score of 82.64 to earn ROC nine points.

With just the Women's short program to go the United States, ROC and China lead, and the field will be cut in half with only five countries competing in the free skate of the team event.

The United States managed to get a 5-2 win over Finland today, however, it wasn't the medal favourites' result that had people talking.

Veteran Brianna Decker left the ice on a stretcher midway through the first period after a nasty collision with a Finnish opponent. The 30-year-old won't take the ice again at her third Olympics, which will be a big loss for the side, with Decker leading in assists in Pyeongchang in 2018.

ROC and Switzerland also went head to head today, with the Russians getting on top, winning 5-2 scoring in each period and Polina Bolgareva scoring a hat-trick.