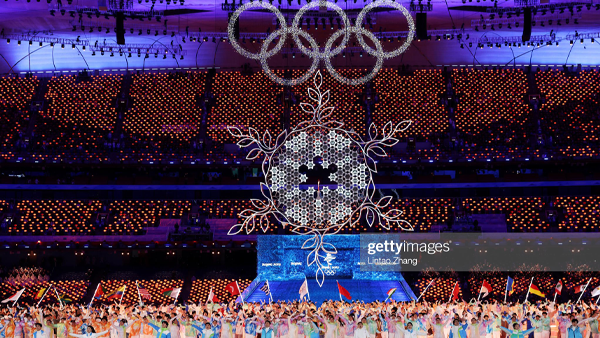 The Beijing 2022 Winter Olympic Games has come to an official end with the Closing Ceremony, with all eyes now on Milano Cortina 2026!

The Beijing 2022 Winter Olympic Games has come to an official end with the Closing Ceremony, with all eyes now on Milano Cortina 2026!

The first nation to host both a Summer Olympic Games and a Winter Olympic Games, Beijing 2022 was brought to a end with the Closing Ceremony, the outlook now heading towards Milano Cortina in 2026.

The Beijing 2022 Closing Ceremony opened with a collection of children, holding snowflake lanterns, dancing around the middle of the Beijing's National Stadium as the logo for this year's Olympic Games appeared via a projection on the surface.

The lanterns were used to light up the snowflake emblem that hung from above, the snowflake a symbol of the Games itself, but also inspired by the Chinese character for "winter". The snowflake - also a part of theOpening Ceremony- was lit as the children began interacting with the snowflake with the lanterns, representing the tradition of "playing with lanterns" during the Yuanxiao Festival.

The Chinese President, Xi Jinping and the International Olympic Committee (IOC) President Thomas Bach were each introduced into the stadium as the host nation's flag was hoisted alongside the Olympic flag, with the country's national anthem playing.

12 giant skates began being carried by the children in a dance across the arena's surface, each one representing the Chinese zodiac signs, each one also being moved around in away to signify a knot.

The traditional knot pattern, as was the case at the Opening Ceremony as well, was to symbolise the athlete's return, and in this instance too, the togetherness of the flagbearers of each of the 91 competing nations, who were then walking out onto the arena.

As is tradition, Greece (who's flag was carried by alpine skier Ioannis Antoniou - who was also the first to carry the Olympic torch for these Games) lead the progression, entering to Beethoven'sOde To Joy.Sami Kennedy-Sim was flying the flag for Australia.

After each flagbearer had arrived into the stadium, it was the athletes turn themselves, as again, all nations came out in no proper formation, such was the notion of "togetherness" that the Beijing 2022 Winter Olympic Games had embodied so much.

While their faces were hidden behind their masks, it was easy enough to see the joy and elation on each athlete's face - and the marshals -, some athletes and contingent of teams acting as if it was a party, posing for photos, or, in the instance of France and Japan, combining to play 'ring around the rosie'.

The amount of athletes involved in this part of the Closing Ceremony, plus the amount of fun it was apparent they were having, repeated calls over the intercom for athletes to find their way to their seats didn't seem to work as expected. The movement was slow, the athletes obviously wanting to soak up the atmosphere and take in the experience of it all to celebrate a successful Games.

The moments of happiness out on the stadium at the present time moved towards a montage of competitors of the Games, with music building to a crescendo , including raw sounds of the sports, signalling the triumphs especially and the sporting spirit between teammates, and rivals.

As is tradition, the last two medal ceremonies took place at the Closing Ceremony with the Men's 50km and Women's 30km Cross Country Skiing Mass Start events. Alexander Bolshunov of the ROC and Therese Johaug of Norway won gold in the respective events.

After a short video highlighting the work of the volunteers, the newest member of the IOC Athletes Commission and five-time Olympic biathlete Martin Fourcade presented red lanterns as a gift to a group of volunteers, representing the over 18,000 who worked and took part in these Games.

BEIJING 2022 DAY 16 WRAP: THE FINAL MEDALS ARE HANDED OUT

In a continued showcase of traditional symbolism of Chinese culture, a section in the program dedicated to remembrance saw a willow tree's branch represent a gift of departing parties.

"In ancient China, when two dear friends part, the travelling party will always receive a willow twig as a gift. As time went on, the breaking of the willow was not only a parting gift among friends, but also an expression of longing for family or brothers in arms," the commentary said.

The children of the Closing Ceremony each held a willow twig, with 365 of them all up, signalling each day of the year, with the performers interacting with the LED flooring, leaving trails of the "weeping willow" as a "bittersweet goodbye".

STARTING THE HANDOVER TO MILANO CORTINA 2026

The first of the Closing Ceremony's signs of a handover from Beijing to the Winter Olympic Games' next location, Milan and Cortina d’Ampezzo began with linking back to the origins of the Olympic Movement, Greece, with its flag raised alongside the Chinese flag from earlier in the night, with the country's anthem playing.

The Olympic flag was being lowered too, signifying the handover of the Olympics from Beijing to the next host city. While this was happening, the  children of the Malanhua’er Children’s Choir of the Fuping county (also part of the Opening Ceremony) sung the Olympic anthem.

The Olympic flag was then physically (and symbolically) passed onto the next host nation of the Winter Olympic Games. The flag passed through the hands of Mayor of Beijing Chen Jining, IOC President Thomas Bach and finally, jointly, Mayor of Milan Giuseppe Sala and Mayor of Cortina d’Ampezzo, Gianpietro Ghedin as the Italian national anthem played and the flag was hoisted.

Going back to the performance of the event, two kids, representing each of Milan and Cortina d’Ampezzo rolled a globe towards the middle of the stadium's floor where the snowflake stood above. The concept, putting the two cities together, Milan representing the city, future, and mankind, while Cortina represents mountains, nature, and sustainability.

'Duality, Together' was the theme of the artistic segment, with an accompanying video showcasing the best parts of each city, touching on those aforementioned highlights of the individual landscapes, panning across skylines and snowy mountains.

A harmonious dance between the "souls of the mountains and the city" followed, with the two dancers creating the pictograms of the sports, before forming the emblem for the upcoming Milano Cortina 2026 Winter Olympic Games - which, for the first time ever, the logo was chosen by popular vote.

The flags of each participating nation returned to the background as Beijing 2022 President Cai Qi and IOC President Thomas Bach were to bring an official close to this year's Games.

Cai thanked everyone who was involved in the running of the Olympic Games, stating that Beijing 2022 opens up a "new era of sport". He also added that "together, you have worked wonders for the Games".

Bach mirrored his Opening Ceremony remarks around the theme of peace, his statement telling of a mark of respect towards each other in participating in Beijing.

"Over the past 16 days, we admired your outstanding performances. Each and every one of you strive to achieve your personal best, we are deeply touched how you were wishing and cheering for your competitors to achieve their best as well," Bach spoke.

“You not only respected each other, you supported each other, you embraced each other, even if your countries are divided by conflict. You overcame these divisions, demonstrating that in this Olympic community we are all equal, regardless of what we look like, where we come from, or what we believe in.

“This unifying power of the Olympic Games is stronger than the forces that want to divide us. You give peace a chance."

Bach then took a moment to thank the organisers and those who helped make the Beijing 2022 Winter Olympic Games possible.

“The Olympic spirit could only shine so brightly, because the Chinese people set the stage in such an excellent way and in a safe way. The Olympic villages were outstanding, the venues magnificent, the organisation extraordinary," Bach said.

“The support of the National Olympic Committees, International Federations, our top partners and rights holding broadcasters unwavering. Our deepest thanks and gratitude go to the Organising Committee, the public authorities, and all our Chinese partner and friends.

“On behalf of the best winter sports athletes of the world, I say thank you. To all the volunteers, you warmed out hearts with your smiling eyes, your kindness will stay with us forever. Thank you volunteers.”

The IOC President then called upon everyone to rally behind the event in four years time too, as he officially spoke the closing remarks.

“This unforgettable experience was only possible because of our gracious hosts, the Chinese people," he said.

"With over 300 million people now engaged in winter sports, with the great success of the Chinese athletes, the positive legacy of these Olympic Winter Games is secured. With the truly exceptional Beijing 2022 Winter Olympics we welcome China as a winter sport country.

"And now I have to mark the end of this unforgettable Olympic experience. I declare the 24th Olympic Winter Games Beijing 2022 closed. In accordance with tradition, I call upon the youth of the world to assemble four years from now in Milano Cortina, Italy, to celebrate with all of us, the 25th Olympic Winter Games.”

As the progression of flags surrounded the Olympic rings, the Olympic torch was also snuffed out as the closing celebration of Beijing 2022. In another tribute to the Summer Games 14 years ago, the children's choir sungYou And Me, a song sung in 2008 as the rings were raised, and the snowflake lowered.

A pyrotechnic show illuminated Beijing's night sky, with a bold message of "ONE WORLD ONE FAMILY" spelt out among the fireworks. Auld Lang Syne, the traditional farewell song played as the Closing Ceremony came to a close itself for 2022.