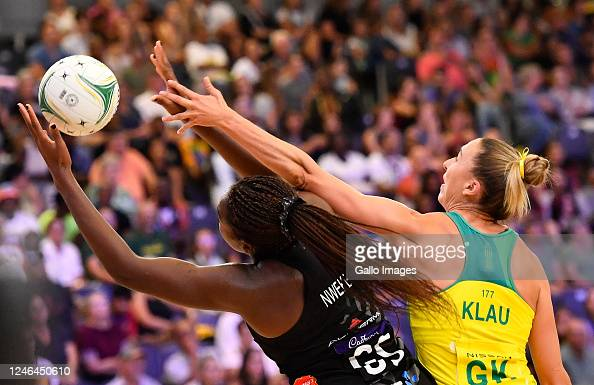 After a tightly contested match, Australia top the ladder after beating New Zealand 59 - 57.

After a tightly contested match, Australia top the ladder after beating New Zealand 59 - 57.

With both teams coming away with a win during yesterday's games, this was a chance for one country to get ahead early. After an exciting tied game between South Africa and England earlier in the day, the netball community was buzzing.

Australian's coaching team chose two SSN combinations to get the Diamonds started, with Koenen and Wood in the goal circle. Melbourne's tried and true midcourt duo Kate Moloney and Liz Watson had their hands on everything.

The first win for the night came via New Zealand's defensive pressure in the backend. What looks to become New Zealand's trusted attacking end converted quickly as they got into their rhythm.

With only four minutes gone, Courtney Bruce received a caution for holding onto her opponent's arm. Although valuable in yesterday's game with four intercepts and two gains, she received the most obstruction calls of the match.

Courtesy of turnovers and consistent scoring, the Ferns led the 17-13 come quarter time. No positional changes were made by either team for the second quarter.

Straight off the whistle, New Zealand had four-goal run, putting them into the 20s. The Diamonds were able to start getting their groove thanks to some intercepts via Sarah Klau and Moloney.

In historically contested match-ups against the Ferns, staying goal for goal was key if they were to stand a chance at winning.

Soon Australia was up by three in the quarter, only one away from the Ferns overall. This was how half-time ended, after a run of goal-for-goal play. Trailing 28-29, Australia was coming back from a slow start against a hot Silver Ferns.

During last night's game during the Proteas all but two players were replaced at half-time. Once again, the coaching team took this approach, with only Grace Nweke and Karin Burger remaining on court come the second half. Australia only made one change with Paige Hadley on at centre in place of Kate Moloney.

The third quarter felt relatively unremarkable, with a slow and steady flow coming from both teams. At the halfway point players were flying at both ends but the score difference remained stable. Right on the siren, Koenen scored one last goal, putting the Diamonds up 44-43.

For the fourth quarter, Australia made no changes whilst Kelly Jury reappeared on court, this time at goal defence. The Diamonds got an early three-goal run, creating a small buffer.

Soon it was time for the Ferns to start making moves if they wanted the win. Although only four goals behind, the clock was ticking down. In response to the time pressure, Jury was replaced by Burger, who returned to court at goal defence. Soon after, Kate Heffernan took the court at centre.

However, time was in the Diamonds' favour, who were putting the pressure on in all areas of the court. With a minute left, all they needed to do was chew up time to keep their win. In the dying seconds, New Zealand had one last push, but were not able to deny the Diamonds a 59-57 win.

Australian vice-captain Steph Wood was named player of the match scoring 20 goals from 23 attempts in her 60-minute performance.

Nweke once again proved herself very valuable to the Ferns, playing another 60-minute game, scoring 44 of the team's 57 goals.

Following a rest day on Tuesday, Australia will play the Proteas on Wednesday at 3:00AM AEDT.