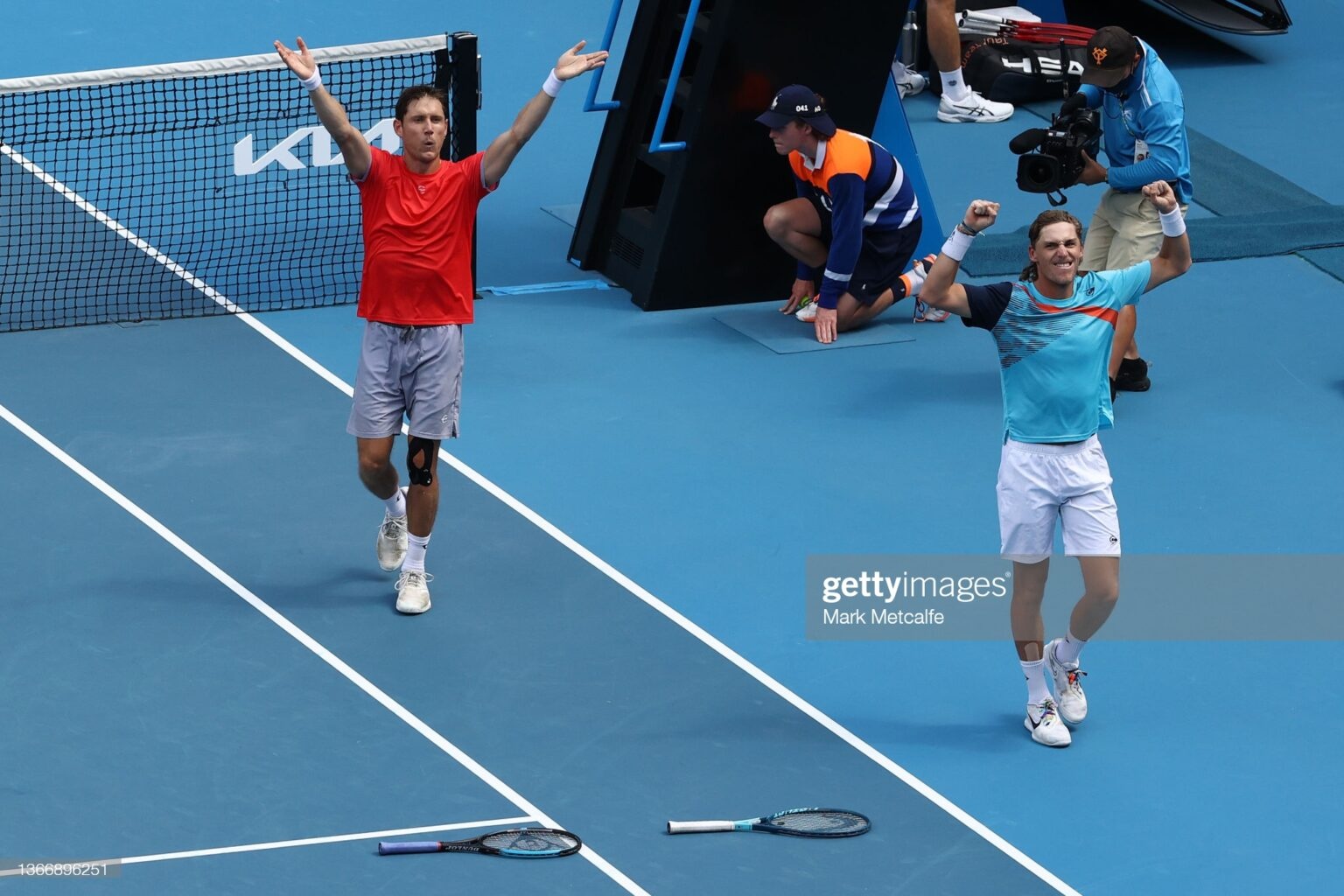 Day 10 of the Australian Open continued the hg=igh pressure, high wire performances across Melbourne Park as the semi final fixtures were set.

It was a quieter day for the Australians, but still a good day.

Matthew Ebden and Max Purcell have been a much lower voltage doubles team for most of this tournament. While Kyrgios and Kokkinakis have drawn attention for the way they have played, Ebden and Purcell have quietly worn away opponents.

Ebden and Purcell started slowly against the tenth seeded pair Wesley Keelhof and Neal Skupski. The Aussies were broken in the first set, and would go down 3-6 early.

With the crowd behind them on the Show Court Arena, the pair would dig deep to break back in the second set and take it 6-4, forcing a deciding set.

In the deciding set, the Australians served well, and had the crowd behind them as they build momentum.

While the Australians were unable to break the serve of their opponents, they did manage to jump out to an early lead in the tiebreak.

That early lead was enough to carry them through, as they won the tiebreak 10-6.

The win books a place for Ebden and Purcell in the semi final, and keeps hopes alive of an all-Australian final, if both they, and Kyrgios and Kokkinakis win their respective semi final matchups.

Aussie Storm Sanders and her doubles partner Caroline Dolehide were bundled out of the Women's Doubles by the top seeded Barbora Kejcikova and Katerina Siniakova.

Sanders and Dolehide went down in straight sets, despite forcing a tie break in the second set.

In the end, the ninth seeded duo were outmatched as the Czech favourites progressed.

The Australian Mixed Doubles pairing of Jason Kubler and Jaimee Fourlis were forced to wait for their opportunity to play their semi final.

Scheduled late on Rod Laver Arena, and not starting til well after midnight seemed to slow down the Australians.

They lost the first set, but fought back from facing match point to force a tiebreaker in the second set, and then a third set tiebreaker.

A cold, calm serving performance in the tiebreak gave them the win and booked a place in the final on Friday.

Daniil Medvedev has been carrying the favouritism for the tournament since Novak Djokovic's deportation, as the highest-ranked men's player in the draw.

Ninth-seeded Canadian Felix Auger-Aliassime was also relishing the lack of the big names, as he fought his way to the quarter finals, and then settled quickly.

Auger-Aliassime was the man with all the running and the composure early, as he took the first set in a gripping tiebreak.

The momentum carried him to a strong second set, where he broke Medvedev and seemed to be in control of the match.

The third set went to a tiebreaker, as Medvedev fought to stay alive. Auger-Aliassime held a match point at 5-4 at one point, but Medvedev refused to give up.

Auger-Aliassime was in a strong position, leading in the tiebreak, when rain struck, forcing a delay. The seven minutes off court broke Auger-Aliassime's momentum. He wouldn't win another point in the tie break, and then Medvedev had a sniff.

Medvedev would only manage to break Auger-Aliassime once in each of the final sets, but it was enough. He also staved off another match point at 5-5 in the fourth set, when Aliassime seemed on the brink.

The World Number Two showed all his class and perseverance, as he held his nerve to win the match deep in the fifth, in the early hours of Thursday morning.

In the other quarter final, Stefanos Tsitsipas easily overcame Jannik Sinner. The fourth seed was in control the whole way through the match, never offering up a break point.

He won in straight sets over the eleventh seeded Italian.

The Women's singles was the end of the fairytale runs.

Kaia Kanepi took an early lead against the seventh seeded Iga Swiatek, but it wasn't enough, as the Polish star took control of the match to win the third set convincingly.

Alize Cornet, who won hearts for her post-match interview a couple of days earlier was thoroughly outplayed by American 27th seed Danielle Collins.

In the Men's Doubles, second seeded duo of Rajeev Ram and Joe Salisbury easily accounted for the Italian duo Fabio Fognini and Simone Bolelli. They will play Ebden and Purcell in the semi finals.

In the Women's Doubles, the favourites were again on top. Veronika Kudermetova and Elise Mertens accounted for Kirsten Flipkens and Sara Sorribes Tormo.