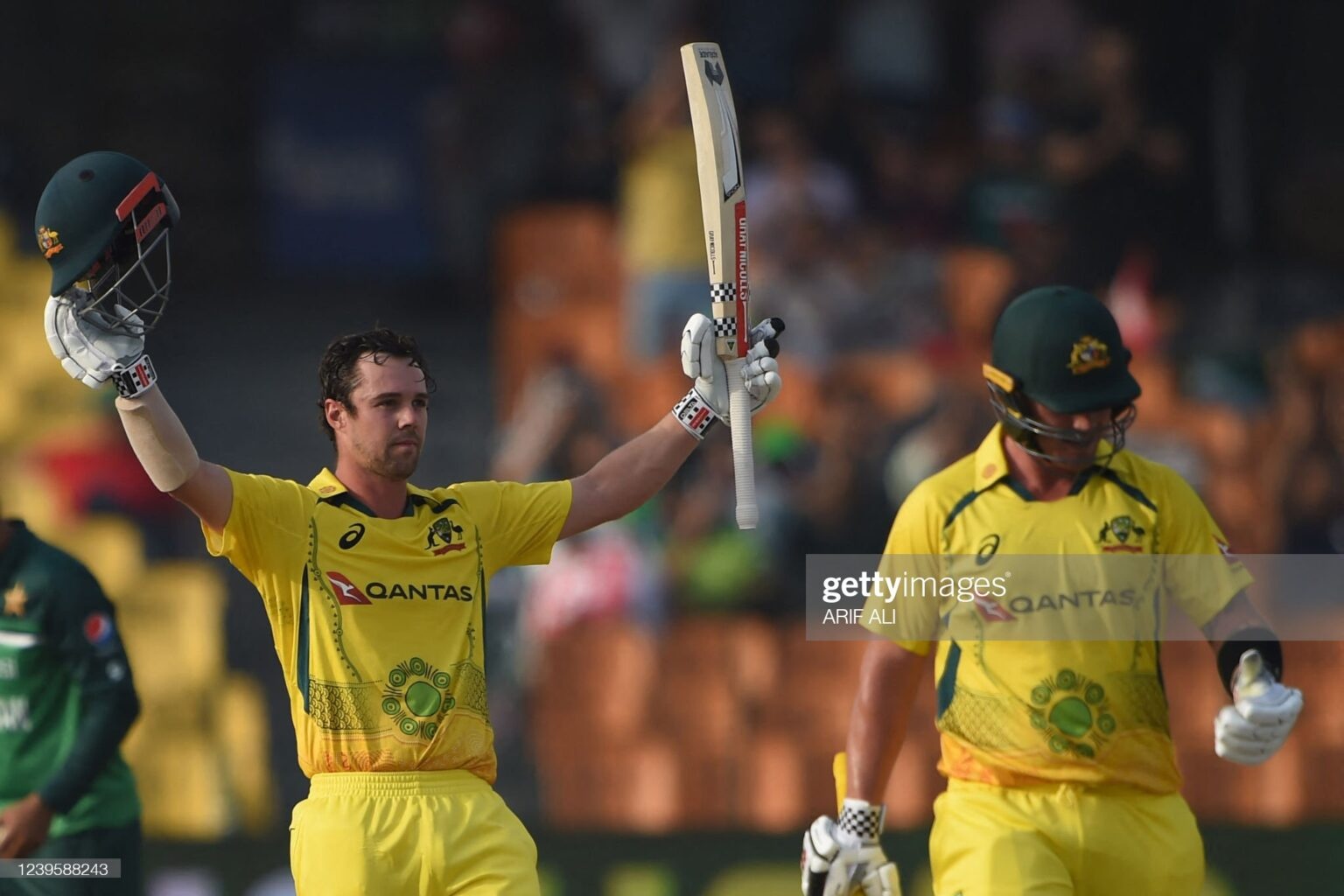 Australia has taken victory in the first ODI against Pakistan thanks to a massive century by Travis Head along with four wickets by Adam Zampa. Australia won by 88 runs.

It’s been a tumultuous build up over the last week to this ODI series, first, it was Steve Smith leaving and Mitch Swepson staying in Pakistan. We then learnt that Scott Boland and Marcus Harris tested positive on the way back from Pakistan.

Then only days later both Josh Inglis and Ashton Agar also tested positive for COVID. It means only 13 Australians were available for this match and the Aussies chose the two left-armers in Ben Dwarshuis and Jason Behrendorff being left out of tonight’s XI for the first ODI.

Pakistan won the toss and decided to put the Aussie openers Aaron Finch (23) and Travis Head into bat first. It was to be Head’s first ODI since he was dropped upon the return of Steve Smith and David Warner all the way back in 2018.

Australia had a terrific start with the bat, particularly Travis Head (101) who blasted the ball to all parts. The 50 run opening partnership was brought tip after only 6.2 overs and Heads 50 wasn’t too far away being brought up off only 32 balls. Head did the bulk of the scoring with Finch struggling to get the ball off the square, the only redemption was a big six when spin was eventually brought on.

The run-scoring continued by Travis Head often finding the boundary through the offside as well as getting the slog sweep going against the Pakistan spinners. One-shot from Head over mid-wicket from the bowling of debutant Zahid Mahmood (2/59) was the clear highlight.

The hundred run partnership was then brought up in only the 14thover but not too much later Finch eventually had to go. The questions around Finch’s place in the side will continue with him only getting to 23 in this innings, in fact, his opening partner for today may well be a leadership option if the selectors do decide that Finch has had enough.

Head then partnered with McDermott (55) to dominate the bowling albeit slowing down slightly. Eventually though just after the 50 run partnership was brought up Travis Head brought up his century.

It was Head’s second ODI century and one of the fastest of all time by Australian batters. He looks to have secured his place in this side even if it is only for this series. Can he continue in the side, possibly but it might mean Steve Smith has to make way and that would be a massive call. Head though has certainly shown his skills in this side today.

The Australian batting line-up then continued to bat slowly with regular wickets falling. Marcus Stoinis’ (26) innings was particularly bad bringing up only 26 from 42 before being bowled by Haris Rauf (2/44). Cam Green (40) managed to get onto a few later on hitting 40 from 30 balls to make sure Australia would at least get to 300.

A couple of late order fours meant the score crawled to 313/7 from their 50 overs with a long bowling innings ahead of them with a mediocre pace bowling attack at their disposal.

Pakistan started very well although without the big-hitting of a Travis Head at the top of the order. Fakhar Zaman found his way to 18 before being dismissed by Sean Abbott when Fakhar tries to go big but only found long-off.

A long drought of wickets then camphor the Aussies but it wasn’t too much of an issue with the run rate slowing dramatically. The spin of Adam Zampa, Mitchell Swepson and Travis Head all made sure the Pakistan batters couldn’t get away. In fact, which seemed to be the plan for a lot of the innings.

Babar Zama was the start of a small collapse when he fell at 2/120 to the bowling of Mitchell Swepson when he tried to sweep a full one. Only a few runs later Travis Head picked up the wicket of Saud Shakeel before Adam Zampa took the wicket of Mohammad Rizwan with a great catch to Alex Carey. It was certainly spun to win, and it worked for the Aussie spinners who were well on top.

Travis Head picked up a second one when Iftikhar Ahmed didn’t get all of a slog and hit it down to Sean Abbott on the rope. It’s fair to say this is Head’s best ODI performance by a long way. The wicket meant that with 15 overs to go to Pakistan needed 10 per over, it was always going to be a huge ask.

Imam-ul-Haq provided some resistance much as he did in the Test series, after the fifth wicket fell he went ballistic hitting a couple of sixes and then a couple of fours. However, he was left with way too much to do by himself.

Imam got himself to a century his eighth in ODI cricket before he was bowled by Nathan Ellis around the wicket. Adam Zampa (4/38) then took the all-important wickets towards the end to make sure Australia would take the first ODI.

The match finished with Mitch Swepson taking the wicket of Haris Rauf to guarantee the victory for the Australians. Travis Head was named player of the match for his amazing work of 101 with the bat and two wickets with the ball.

The players will take a day off and then get back on the park on the 31stof April with the match starting at 9pm AEDT.