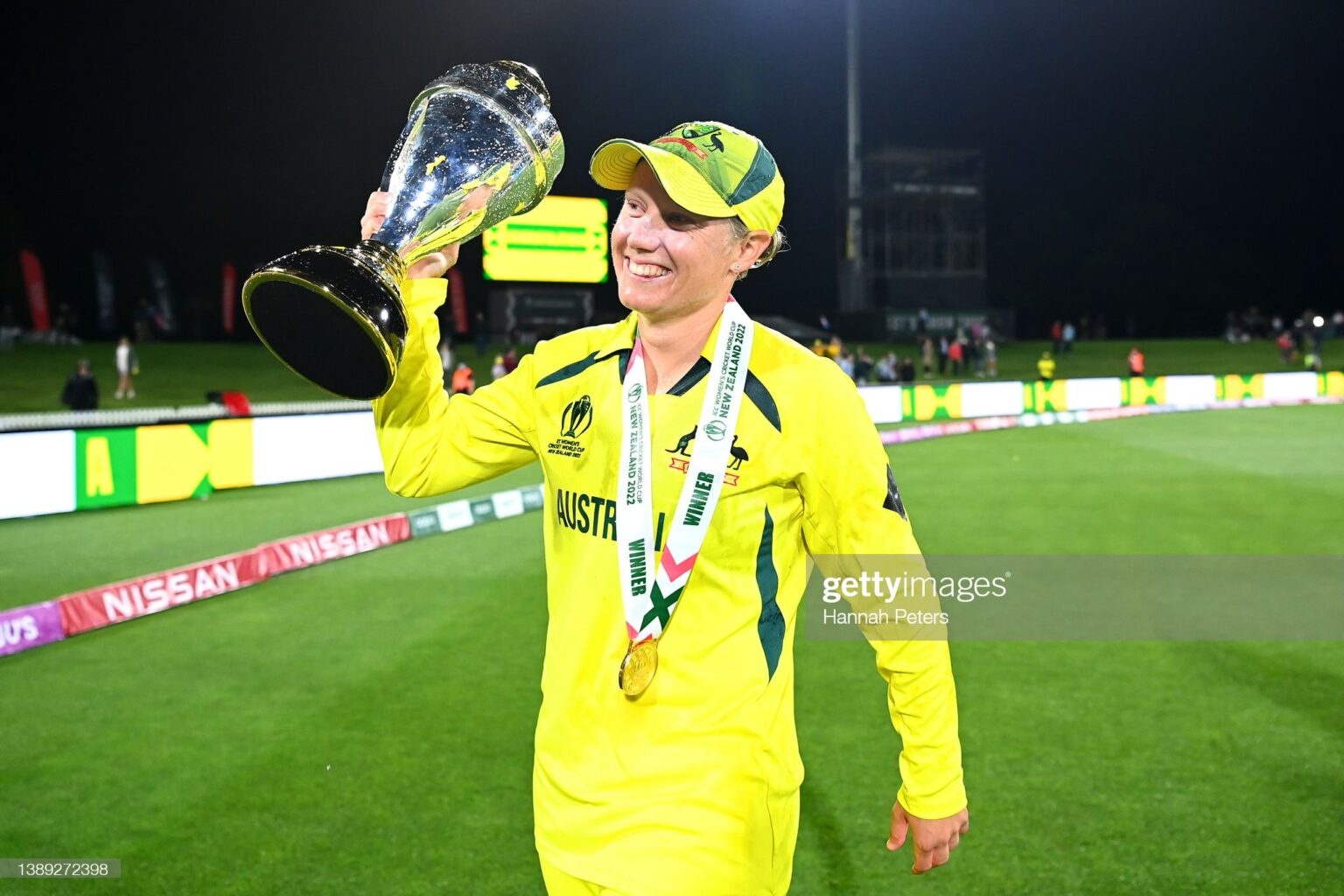 A second magnificent Alyssa Healy century in as many games has proved pivotal as Australia has been crowned World Cup Champions, and hassecured a unique place in history, after beating England by 71 runs in the final.

The Australians were thrilled to have Ellyse Perry back in the side, as the allrounder overcame back spasms to be able to bat, but wasn't able to bowl.

For the second time in a week, they built a 150 run partnership with ease, before Rachael Haynes was dismissed in the 30th over, caught by Tammy Beaumont from the bowling of Sophie Ecclestone.

Haynes, out for 68 from 93 deliveries, had helped lay another massive platform for the Australians, alongside Healy. The opening partnership has been a strength for the Aussies for much of the tournament, and Healy was keen to continue.

Beth Mooney made her way to the middle, elevated back up the order to keep the accelerate on in the final, with Meg Lanning pushed down the order.

It was a masterstroke, as Mooney ramped up the scoring, alongside Healy. While Mooney was adding the runs, Alyssa Healy was not-so-quietly compiling the innings of a lifetime, in the biggest moment of her career so far.

"I, at no point, thought that it was anything," Healy said after the game.

"I was just watching the ball and trying to hit it and trying to get our team to a really good total ,so at no point did I think of anything. I think [Mooney] said to me at one point 'you could get 200 here', and that was probably the first time that it crossed my mind that I had that many runs."

By the time it was all said and done, Healy had scored 170 runs from 138 balls, in an innings that set up the final for the Australians. Healy finished with 509 runs for the tournament, the most of any player.

For Healy, it was a culmination of years of hard work, but something that had never crossed her mind until today.

"I don't think I've ever dreamt of anything like that before, I can guarantee that, but I'm just really proud to have been able to contribute to this win.

"I ran drinks the whole 2013 World Cup, and we didn't make the final in 2017, so for me, this trophy means a lot, and to be able to turn up at the back end and go alright in the last two games means a whole heap."

Healy's magnificent innings came to an end on 170, as she was stumped, trying to take down Anya Shrubsole one too many times.

As she departed in the 46th over, the damage was long done for the Australians. Already, 316 runs were on the board.

Ash Gardner came and went quickly, run out trying to keep the pressure on, and two overs later, Meg Lanning and Beth Mooney fell in consecutive balls in the 48th over.

The English started the chase with aggression, but Danielle Wyatt was out cheaply, in a big blow. When Tammy Beaumont followed just a handful of overs later, the English were in trouble early.

While the run rate was within their reach, two wickets down early, a contrast to the dominant Australian opening partnership.

The English side strung together a couple of partnerships, as Nat Sciver held down an end.

Sciver went on to play one of the innings of the tournament, scoring 148 herself. She played a key role for England, but she ran out of partners in the end.

Sciver's 148 stood head and shoulders above the rest of her team, as Tammy Beaumont was the next highest scorer with 27 runs.

Alana King and Jess Jonassen were key destroyers for Australia, taking three wickets each. Megan Schutt chipped in with two wickets at the start of the innings to put the pressure on early.

England was all out for 285, 72 runs short of the target to win the tournament, and defend their 2017 title.

Healy was crowned player of the match, and player of the tournament for her performances, including back to back centuries in the semi final and final.

For Lanning, it was the culmination of a concerted effort about the style of the team.

"That's the style of play we want to go out there and play, it's taking the game on, it's being brave," Lanning said.

"I think [Mott] said in a message earlier today to the group to be brave and go out there and get the game. The game owes us nothing, we have to go out there and play it and win it, and that's what happened today.

It's incredible the innings there, it was something special to watch. I was loving every moment of it, sitting up in the stands, and to do it on such a big stage is so great for this group.

"In the 2020 World Cup we played our best game on the biggest stage, and I think we did the same thing today, and that's a really impressive thing for our team is not to fear or get scared of the big stage and the big moments."

As the final wicket fell, Australia was crowned champions for the seventh time, a record across all forms of cricket.

For Healy, the moment was one to savour.

"I don't think relief is the right word. It's pride," Healy explained.

"I'm so proud of this group, to be able to reinvent, or whatever word you want to use, we came together as a squad and said 'this is how we want to play our cricket from now on and we're going to be the best team in the world'.

"For all 15 people in our squad, and for the girls who have come into our squad and buy into that has been unbelievable and I think that's the culture created by [Meg] and [Rachael] and [Matthew Mott], and I think to be able to have done what we have done over the last five years, to have the trophy in our hands is finally the last piece in the puzzle that needed to happen."

For Lanning, who has been part of building the culture of success, and at the helm of a team that has won 22 series in a row, and 40 of their last 42 matches, the achievement is a special moment in her career.

"There's no doubt this is high on the list. We obviously go out there to win every game that we play, but it's not easy. You're playing against extremely good teams, who are chasing you really, and they're coming out to play their best cricket against you.

"We've been able to really evolve as a group and play the style of cricket that we've spoken about - we've said how we wanted to play and how we wanted to operate as a team, and the thing that stands out as a team, and this is the thing I'm really proud of, is that we actually go out there and we actually o it, and through this tournament, we have a really clear style of play and we want to take the game on and make it hard for opposition teams.

The victory tops off a successful few months for Australia, who have beaten India and England in series at home, retained the Ashes and then won a World Cup. Now, its time for a break, and to let their historical achievement marinate