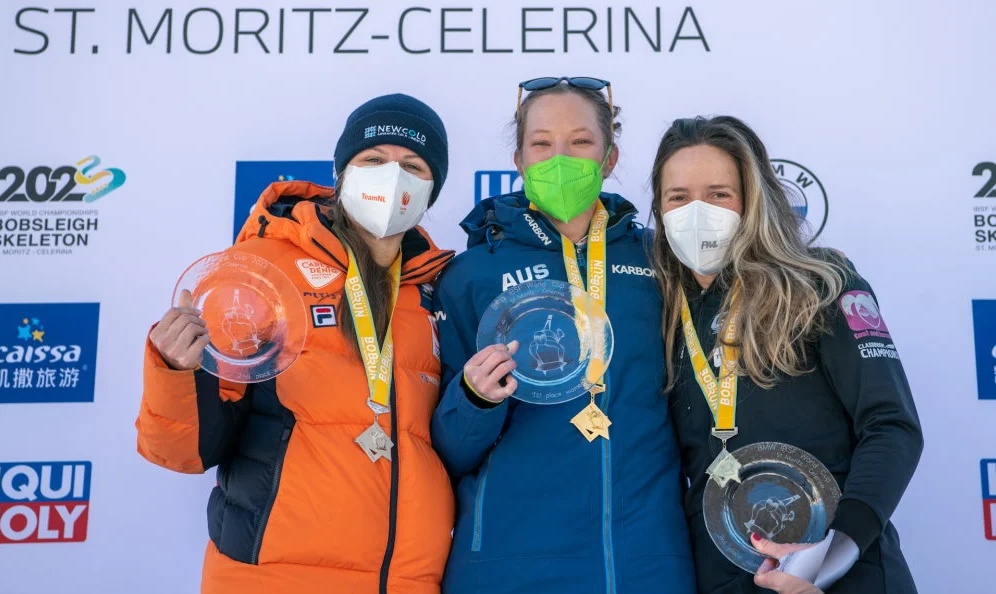 In the final round of World Cups ahead of Beijing 2022, Australia's Olympic hopefuls won five medals and had several career bests, locking in their Olympic quota spots with just over two weeks until the Opening Ceremony.

Bobsleigh hits the breaks while Skeleton glides onto podium

In the last competition of the 2021/2022 World Cup season,Jackie Narracott did the unthinkable, winning Australia's first World Cup gold in a sliding sport.

However, she wasn't the only Australian competing in a sliding sport, in the Bobsleigh, Bree Walker was in St Moritz looking to finish on the podium in the monobob and finish in the top three in the World Cup standings for the season.

But it wasn't to be with Walker finishing eighth following the first heat and seventh after the second to fall to fifth in the world standings.

In the two-woman bobsleigh, she was joined by brakewoman Sarah Blizzard who'd been out in recent weeks due to illness. The pair finished the event in 15th, Germany swept the medals with Kim Kalicki and Lisa Buckwitz taking gold.

Meanwhile, in the luge Alex Ferlazzo was at a World Cup event in Oberhof, Germany, it wasn't the competition he would have liked finishing in 31st, 1.9 seconds behind gold medallist Johannes Ludwig of Germany.

Fellow Aussie Danielle Scott narrowly missed the podium but also went big in the final attempting the same jump that won Peel gold, however, struggled with her landing to score 80.27 points.

Tess cracks the code to win in Laax

The snowboard slopestyle and snowboard salfpipe were in Laax, Switzerland this weekend with four Aussies contesting for a spot in the podium.

Tess Coady was the sole Australian to land on the podium, but finished on the top step winning gold in the Women's Slopestyle.

Matt Cox had the best weekend of his career finishing in seventh place in the men's slopestyle event scoring 65.78.

Meanwhile, in the men's halfpipe, Scotty James couldn't replicate the dream qualifying performance in finals at his first competition back, finishing in 11th.

But 16-year-old Valentino Guseli had a career-best performance finishing in fifth, putting down two consistent runs to score 80.50 and 80.00 in each.

One medal wasn't good enough for Jakara Anthony this weekend, with the doubleheader World Cup event proving to be a successful competition for the Australians this weekend.

Anthony took home a bronze in the first event, despite having the best score from a man or woman for the event in the first run in finals.While Cooper Woods made his first-ever super final to finish in fifth.

It was Brodie Summer's turn to make the super final in the second event of the week, finishing in sixth with a seasons best result.But of course on day two it was Anthony that shined again winning silver, and proving she's a serious podium threat in Beijing.

Harrigan one outside of Olympic qualifying

It wasn't a good enough spot to earn her a quota spot for Beijing 2022 but with Canada and the United States exceeding the max Olympic quota spots in Freeskiing, Australia is first in line to take an assignment should either country forgo a Slopestyle allocation.

Which is looking likely at present as Canada currently does not have enough eligible athletes to send four athletes in the women's slopestyle.

The Australian men didn't perform quite as well as Harrigan with Bailey Johnson finishing in 34th, while Cameron Waddell was in 36th.

Sami Kennedy-Sim levels up in second event this weekend

The ski cross athletes were also subject to a doubleheader World Cup this weekend, with Sami Kennedy-Sim, Dough Crawford and Alfred Wenk looking to survive the difficult conditions in Nakiska Canada.

It wasn't a great first day for either Australian, with Kennedy-Sim finishing in 22nd while Crawford finished in 48th and Wenk couldn't crack the top 50 and finished in 51st.

On day two Kennedy-Sim managed to push her way into the top 20, finishing in 14th, but it was a similar day for Crawford and Wenk who finished in 45th and 54th respectively.

Greta Small continued her run of 40-50 place finishes this season in Zauchensee, Austria.

In the downhill event, she finished in 41st with a time of 1:49.71, 3.93 seconds back from Swiss gold medallist Lara Gut Behrami.