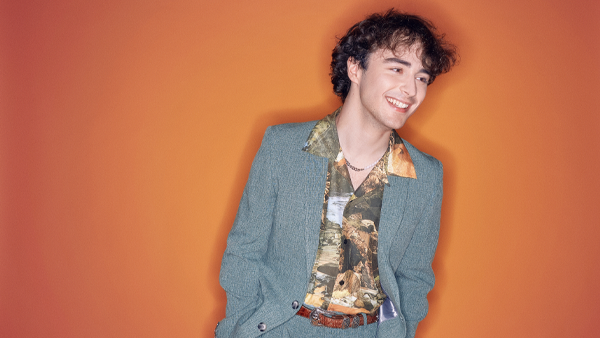 British singer-songwriter Alfie Templemanhas shared his latest singleColour Me Blue, off his soon-to-be-released debut album as he continues to prepare for his debut appearance in Australia.

Colour Me Blueis the fourth single to be released from Alfie Templeman's upcoming debut albumMellow Moon, out on May 27 via Chess Club Records/AWAL, with this latest track following recent singles3D Feelings,BrokenandLeaving Today.

Co-produced by Templeman and Kieran Shudell (Circa Waves), the multi-instrumentalist commented on the track, stating "Colour Me Blue is a love song about that wave rushing through you that you feel when you fall in love”.

The 19-year-old began working on his long-awaited debut album,Mellow Moon, in early 2020, the effects of the last few years, for both him personally and the world was unpredictable.

Two years later, Templeman has emerged with an album that lands between an otherworldly trip and a joy-filled ode to life on Earth, explaining "it feels like I’m on a different planet. I’ve gone somewhere new and I’m discovering fire for the first time”.

Across the 14 tracks, calling on regular collaborators Tom McFarland (Jungle), Justin Young (The Vaccines), Will Bloomfield and Rob Milton, Templeman closes his eyes and imagines another world, one where he can be at ease and not be distracted by the many challenges of life.

Embracing honesty and moving past the fear of failure, looking to move forward, he describes the feeling that he's "being really open for the first time about where I’m at mentally. Overcoming that felt life-changing".

With long-standing support of national UK-based radio networks and the national press, Templeman completed his first-ever UK and a European headline tour, including multiple sold-out shows in Manchester, Bristol, Brighton and at Shepard's Bush Empire.

Templeman will be embarking on a run of headline shows in June, as well as a supporting slot alongside The Wombats in what will mark his debut in Australia.

The indie-pop artist will play headline shows in Sydney at Oxford Art Factory and Melbourne at Howler on June 14 and June 16 respectively. The Wombats begin its tour on June 5 in Adelaide, before dates in Melbourne, Sydney, Canberra, and Brisbane.