After the Demons got so close in season six, they will be looking to dig deep and go one further this time around. 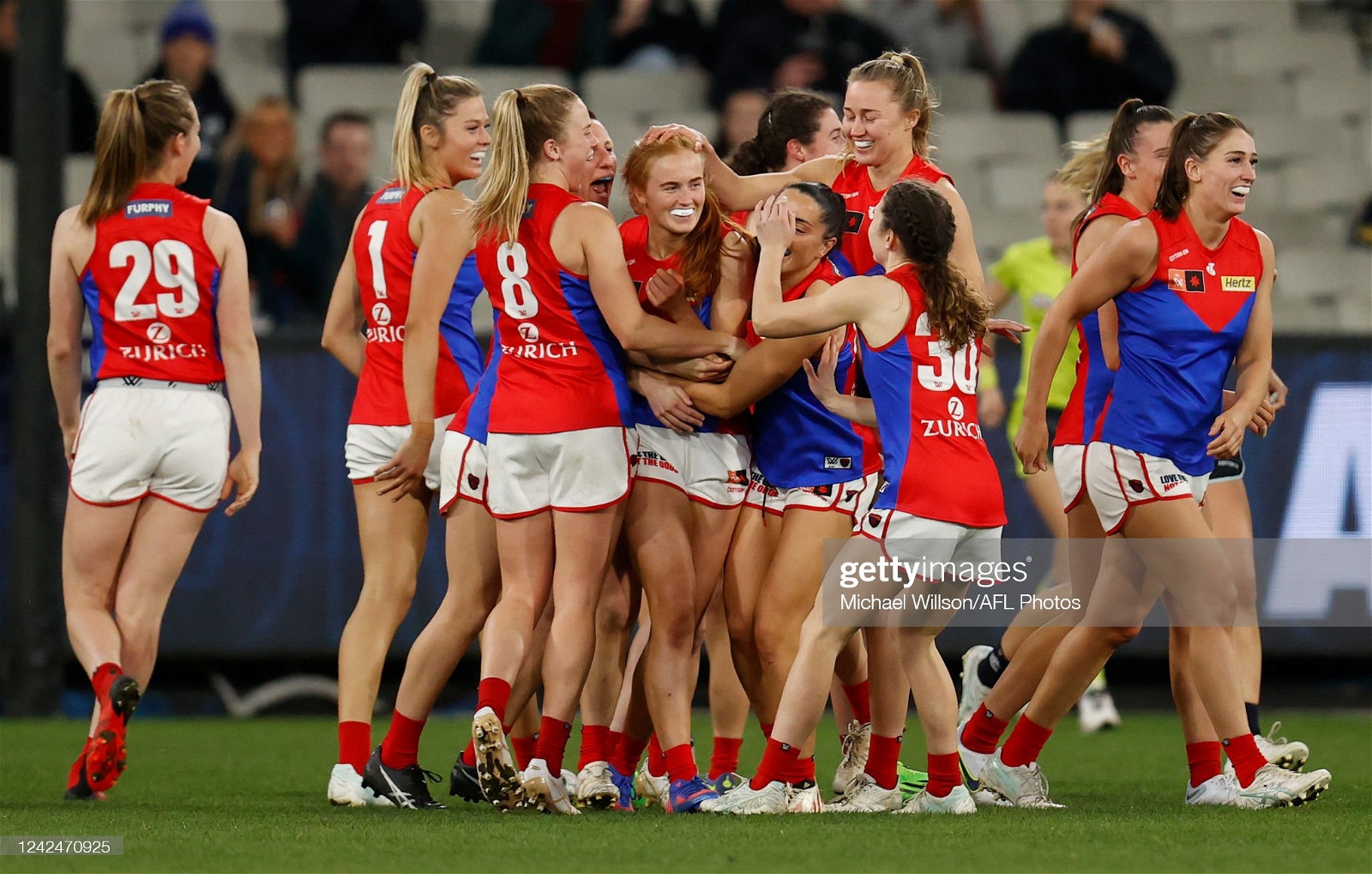 MELBOURNE, AUSTRALIA - AUGUST 13: Blaithin Mackin of the Demons celebrates a goal with teammates during the 2022 AFLW practice match between the Carlton Blues and the Melbourne Demons at the Melbourne Cricket Ground on August 13, 2022 in Melbourne, Australia. (Photo by Michael Willson/AFL Photos via Getty Images)

The Melbourne Demons are the oldest of the AFLW teams, having played in the first AFL sanctioned exhibition match all the way back in 2013. After finishing second last season, can the oldest team in the competition finally get a hand on the silverware?

Melbourne dropped just one match all through the regular season last time around. Their loss came against the top of the ladder finishers Adelaide by 14 points in round four.

Their only other loss in the season came against that Crows once again in the Grand Final when the Demons only managed to put 16 points on the board in what was a fiercely fought contest.

The Demons were one of the year's best teams, getting into the Grand Final for the first time in their history. She may be known by many as a Channel 7 commentator, but Daisy Pearce was once again a force on the field for the Demons last season, leading the Demons with perfection.

The Demons were simply too good against most teams scoring the second most points for the season as well as kicking the second most goals. Once again, it was the Crows who were their downfall; in season 7, there will undoubtedly be plenty of planning on how to take down the Crows.

The Demons had almost the perfect season last time around; this time, it will likely all come down to the finals once again. The good news for the Demons is that they don't have to come up against the Crows during the regular season.

What really let the Demons down against the Crows was their lack of pressure around the ball with the Crows just being too strong and fast. This year the Demons need to get their tackle numbers up from 60.3 last season to around the 70 mark where the elite tackling teams sit.

Daisey Pearce will once again play a huge part in the Demon's premiership aspirations. Last year there was a lot of speculation that she might retire at the end of the season, but her desire for a premiership has continued to drive her forward. Will she be able to get the silverware this year?

There were strengths almost all through the side in season six, with six of the Demons being named in the initial All-Australian squad before four were selected in the final squad.

The obvious strength for the Demons, though, was their goalkicking. AFLW superstar Tayla Harris was immense in front of goal leading the Demons up front, who finished with 74 goals for the season, second only behind the Lions.

As well as Harris, the Demons had three other players in the competition's top ten goalkickers. This list includes Pearce, who will likely spend more time up forward this year as the younger, quicker midfielders come through the system.

While the numbers are all close around the top of the ladder, the Demons gave away the most free kicks last season. If they want to go to that next level, the coaching team must bring in more discipline to get the Demons under control.

The other area that needs a little bit of focus is the hitouts. We saw in the Grand Final last year that the Crows, more often than not, got first advantage and use of the ball.

Suppose the Demons want to be able to take down the Crows in the Grand Final once again, then they need the first advantage to get the ball to their tall forwards like Tayla Harris.

Despite initially being overlooked in the AFLW draft, the extra years in the lower comps have helped Maeve Chaplin greatly in the last few years. At 20 years old, she was selected with the Demon's first selection in the last draft as a rebounding defender who will provide plenty of runs and carry for the Demons.

Interestingly she has recently moved into the midfield with her strength and composure with the ball standing through. With the ability to play multiple positions and put the opposition under pressure the Demons will undoubtedly turn to her during the season.

Undoubtedly, the Demons will be one of the strongest teams in the AFLW once again. Luckily, their best players weren't targeted by the expansion clubs to the degree many others have seen.

With their main contenders in Adelaide losing big names, such as Erin Phillips last season, the Demons have not had a better opportunity to get the win come Grand Final time.

The Demons should finish right at the top of the ladder and with any luck, Daisey Pearce will be able to go out with the premiership cup in hand.