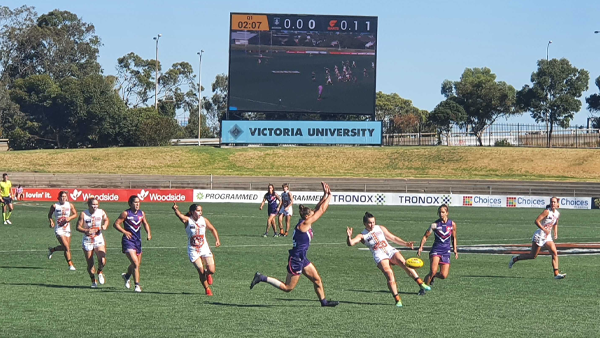 A four-goal-to-none second quarter to Fremantle set the side up well to record its second win of the 2022 AFLW season, prevailing by 32 points over GWS.

A four-goal-to-none second quarter to Fremantle set the side up well to record its second win of the 2022 AFLW season, prevailing by 32 points over GWS.

After both sides found a win in Round 1, it was the Fremantle Dockers who remain undefeated in 2022, with a 32-point win over the Greater Western Sydney Giants at VU Whitten Oval.

A four-goal-to-none second quarter from Fremantle gave the side the ascendency it needed on the contest against GWS, running away with a 7.10 (52) to 2.8 (20) win.

GWS started well early, getting crucial centre clearances, which translated into the first score of the game, albeit a behind.

Fremantle would score the first goal of the contest through Ebony Antonio as it controlled the rebounds across its attacking end, routinely intercepting kicks, or through tackles a theme of the game that would also become apparent in the following quarters.

GWS again gained the centre clearance but for just another behind, the team's first major eluding them until Cora Staunton won a free kick for holding the ball and kicked her first of the afternoon to put her side back in front.

The Dockers were able to link up well through the middle in transition with handballs, a flowing stream of players running forward assisting with the team's second goal of the game, credited to Gemma Haughton.

The willingness to take on the tackles a crash though packs mostly worked well for Fremantle, except it came undone towards the end of the quarter when Staunton slotted her second as GWS took a three-point lead into the quarter-time break.

Despite GWS being strong in the air in contested marking situations all across the ground, Fremantle remained strong in its process of limiting any of its opponent's rebounding efforts, capitalising on turnovers, and in the end, recording four goals in a dominant second quarter.

Airlie Runnalls and Kiara Bowers scored the first two of the quarter for Fremantle before Hayley Miller made it three in a row, helped by a silky pick-up by Ann McMahon who used good vision to see Miller through the traffic of oncoming GWS defenders, and handball, leading to the resulting goal.

A downfield free kick on the stroke of halftime when Dana East had marked and looked to aim for goal just inside the 50m arc, for high contact away from the play resulted in her extending the lead out to 25 points at the main break, slotting a goal from the goalsquare as the teams went back into the rooms.

EAGLES BLINDED BY SUNS AFTER A BLAZING FINAL QUARTER

It was evident from the outset that Fremantle wanted to use the corridor, and it worked to great effect as it recorded the first inside 50 of the second half, however, despite a strong leading mark from Aine Tighe, the subsequent set shot didn't carry with defenders palming it over the goal line for a rushed behind.

In all though, the Dockers were crafty overhead but also knew when to remain grounded for the chances to crumb a loose ball at ground level and reading the play with ease. The Dockers always have the numbers, whether in free space around the ground, or around the ball, allowing for players to force the Giants into turnovers, or to play a slow, hold-up style of play which resulted in little chances to forward much less score.

Most of the action at the start of the fourth quarter was in GWS' forward half as it proved it hadn't run out of legs, continuing to run hard and wanting more chances to score. However, whenever Fremantle was able to get its hands on the ball, players used it well to get forward and create chances heading into the forward 50.

Making the most of its chances, Fremantle kicked the first goal since the second quarter, nine minutes into the fourth term when McMahon marked and kicked truly 45m out on a slight angle as the game was nearing its end.

Despite being on the losing side, Alice Eva tallied a game-high 26 disposals, bettering her Round 1 display against Gold Coast where she recorded 21 touches while Hayley Miler was Fremantle's top-disposal-getter with 19 touches. It remained a standout game for the Docker who had an equal-game-high six marks and seven tackles.

However it was reigning joint best and fairest Kiara Bowers who laid claim to the most tackles in the encounter - bringing down her opponents 12 times, GWS' Katie Loynes trailing with 10. Bowers and Eva had nine and eight clearances respectively as the ruck battle between Docker Mim Strom (21 hit-outs) and the Giants duo of Erin McKinnon (17 hit-outs) and Ally Morphett (15 hit-outs) reached great heights, with all battles crucial.

Both sides remain in Melbourne ahead of respective Round 3 clashes. The Fremantle Dockers come up against the Richmond Tigers at the Swinburn Centre on Saturday, January 22 from 5:10 pm AEDT while the GWS Giants take on the North Melbourne Kangaroos at Arden Street Oval on Sunday, January 23 from 1:10 pm AEDT.