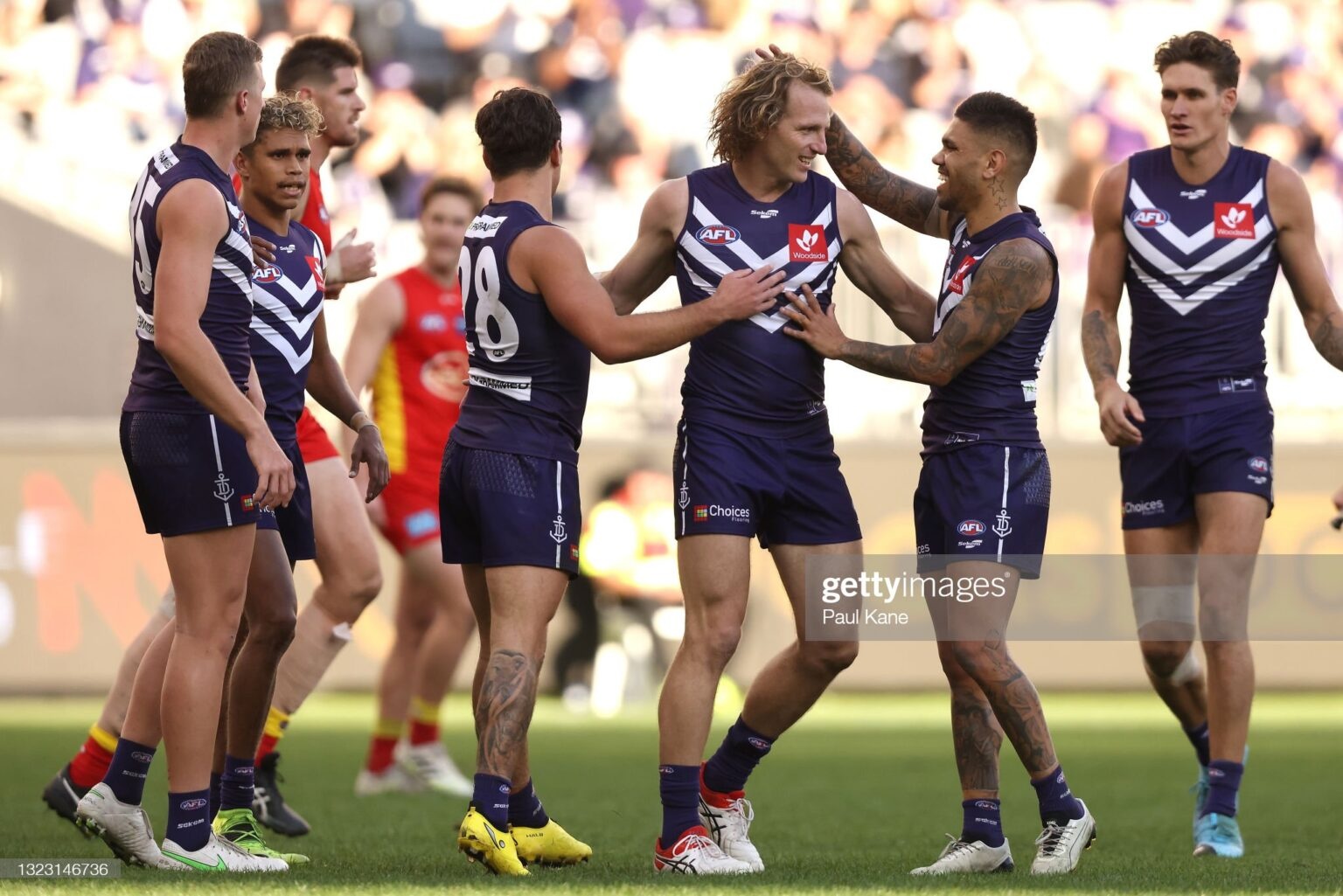 In 2021, Fremantle was one game outside of the finals after a mixed bag of performances. After seeing transformed, youthful Dockers side, fans dare to ask - do Fremantle have what it takes to crack the eight?

It's been a long build back up to finals for the Dockers after winning the minor premiership in 2015. Since 2016's disappointing season, the purple-clad side has slowly been working its way back up the ladder and aspiring to finals.

2020 saw Justin Longmuir take the reins and what he has done with Fremantle has many fans believing again. After missing finals by one game last year, they're daring to dream that this year might be the year.

There's an atmosphere of excitement as Fremantle is churning out more and more exciting young players each year thanks to smart recruiting.

While Adam Cerra's loss may have put a spanner in the works, it was only momentarily, as Fremantle quickly found plenty of young players that have the potential to take them to AFL finals in 2022.

Although Fremantle improved by one ladder position compared to 2020, it seemed to have lifted onfield significantly. Finals were in reach during the last few rounds, after ending West Coast's derby win streak and delivering a rousing performance against Richmond.

But finals were not to be, as a disappointing round 23 outing against the Saints left them sitting outside the eight. Additionally, its' percentage took a hit after big losses to Geelong, Brisbane, and West Coast.

Additionally, key players also spent time on the bench as injury-plagued the Dockers during the season. Despite that, whatever coach Justin Longmuir instilled in his players looked to be working.

At the end of the season, Adam Cerra departed, but Will Brodie and Jordan Clark docked at Freo. Additionally, it arguably came away as the 2021 draft winners, acquiring WA's three best prospects in Jye Amiss, Neil Erasmus, and Matthew Johnson.

Fremantle was up-and-down side last season, inflicting and receiving thrashings against a range of sides, but also losing some winnable games.

They need to find that consistency and ability to compete and win against the better sides. They played 10 games against the eight finalists and came away with two wins against GWS and Sydney. In the eight games, Fremantle lost against finalists, it had an average losing margin of six goals.

If Fremantle is to make the AFL finals in 2022, they need to find a way to compete with some of the best names in the game.

Goal kicking is the main way. Last year the season's scoreline read 219.234, with skipper Nat Fyfe being one of the worst offenders, booting 6.21.

Another area to improve is pressure work and ball movement, finishing 17th in tackles and 15th in disposals. The Dockers have some elite ball winners in Serong, Mundy and Brayshaw, so ideally, they should be ranked much higher.

As always, Fremantle's strength lies in its midfield and only looks to be getting better.

Andrew Brayshaw and Sean Darcy produced career-best seasons, while Caleb Serong continued to build on his stellar rookie season. Additionally, footy fans were reminded of David Mundy's brilliance in a renaissance of form.

The Dockers have all the cogs needed for a well-oiled engine room, the best part is - most of them are young. Darcy, who averaged 29 hit-outs proves his teammates with silver service in stoppages, which is key to winning the ball.

Losing Adam Cerra may slightly disturb midfield balance, but some off-season recruiting leaves selectors with plenty of depth to choose from. Will Brodie and Jordan Clark, or even draftees Neil Erasmus and Matthew Johnson can bolster the midfield, making it one of the most dangerous in the competition.

All this, and we haven't mentioned Nat Fyfe yet. The midfield is definitely one to watch this season and beyond.

Last year, Fremantle’s forward line left a lot to be desired, kicking 219 goals and 294 behinds, making them one of the most inaccurate teams. Ultimately, this cost them winnable games, that may have just pushed them into the top eight.

The frustrating part, is they have players with the potential to post those huge scores. Key forward, Matt Taberner was Fremantle's best forward last year, kicking 37.17 but he cannot shoulder the load alone.

Rory Lobb will need to step up and avoid injury to provide that support, while another year off AFL footy will be beneficial for Josh Treacy. Additionally, 2021 draftee Jye Amiss, who, despite his name, was lauded for his accuracy, should go a long way in solving the accuracy issues if he breaks into the side.

The tall forwards need a supporting cast, and Fremantle doesn’t quite have that just yet. Lachie Schultz and Sam Switkowski are good options, but outside of that, few other players can wreak havoc up forward.

Caleb Serong has been nothing short of impressive since he docked at Fremantle in 2019.

The 2020 NAB Rising star recipient had a shaky start in 2021, but gradually improved as the season went on. By season's end, he has three consecutive games with 30 or more touches and won the Glendinning Allan Medal in the Western Derby.

When he's got the momentum, he can be a huge threat with moments of brilliance as shown throughout the season. This can go a long way to getting Fremantle to the AFL finals in 2022.

Despite only playing 36 games, he conducts himself like he's played way more on-field and off. He's one of the best young midfielders in the league and is set to be a future leader at the club, already receiving the nod for Fremantle's leadership group at 21.

Fremantle is definitely an interesting side to watch heading into 2022. There's plenty of talent across all three lines - the midfield borders on being elite, the defence has plenty of solid players and the forward line has promise.

However, last year Fremantle had a habit of dropping crucial games which ultimately cost them finals. With a difficult run home featuring 2021 grand finalists Melbourne and the Western Bulldogs, it cannot afford to drop winnable games earlier in the season.

Additionally, Fremantle is prone to injuries and has plagued them year after year. Should this trend continue into 2022, it could derail its campaign and see them missing the eight.

However, based on the list alone, and what we've seen in preseason, there's nothing to suggest Fremantle should be completely ruled out as a 2022 AFL finals prospect.