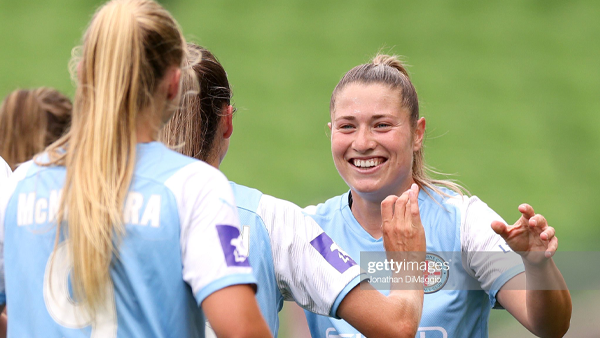 Round 12 of the Liberty A-League saw vital battles between teams contesting for Finals spots. Edge of the Crowd's Ben Gilby rounds up the action.

Round 12 of the Liberty A-League saw vital battles between teams contesting for Finals spots. Edge of the Crowd's Ben Gilby rounds up the action.

It was a weekend of dramatic encounters between Finals-bound teams. Crucial results, incredible wins. Once more the Liberty A-League Women delivered.

Melbourne City condemned Sydney FC to its first defeat of the season in some style.

Melbourne went ahead with just 13 minutes having elapsed on the clock as Kaitlyn Torpey’s ball in from the right found Rhianna Pollicina in space to fire home all too easily from Sydney’s perspective.

Just before halftime, it was 2-0 to the home team as a superb pass from Tyla-Jay Vlajnic split the Sydney defence and found the stride of Torpey who slid the ball into the back of the net.

With 12 minutes to go, Sydney FC grabbed a lifeline when Remy Siemsen was brought down in the box. Princess Ibini stepped up to dispatch the spot-kick. But Melbourne City gained the win.

Perth Glory produced a hugely creditable performance that combined organisation and offensive quality to gain a vital away win against Melbourne Victory as the race for Finals narrows.

The first half see-sawed one way and then the other, but the Western Australians stepped it up after the break with a relentless display of high-quality attacking football.

Two goals in four minutes settled matters in Perth’s favour. Deborah-Ann de la Harpe bent a corner in from the left which was met by a flick header from Mie Leth Jans which came back off a combination of Harriet Withers and Catherine Zimmerman before rolling into the net.

The second goal arrived shortly afterwards. Aideen Keane got away from Courtney Nevin comfortably along the right and played a cross into the near post. Cyera Hintzen brilliantly back-flicked the ball towards Leena Khamis who headed home into an empty net.

EPAKIS COMMITS FOR THE FUTURE BUT IS FOCUSED ON THE NOW

HANA LOWRY: LEADING THE NEXT GENERATION OF WA STARS

A game of four goals and 12 yellow cards, but the outcome did neither side any favours.

The Wanderers took the lead when Ashlie Croft’s shot rose into the net.

The Jets levelled with 15 minutes of the second half gone. Ash Brodigan was felled in the box by Western Sydney’s Alexia Apostolakis. Referee Lara Lee pointed to the spot and Liz Eddy converted.

Apostolakis redeemed herself by firing the Wanderers back in front, smashing a half-volley into the net. It was the 15-year-old’s first-ever A-League Women's goal.

Yet, the Jets came back through Liz Eddy once more. Marie Dølvik’s run down the left concluded with a perfect cross into the box for Brodigan to score.

In-form striker Chelsie Dawber put her side in front when she returned Mackenzie Barry’s clearance into the net.

However, that was as good as it got for the Pheonix. Zoe McMeeken’s unfortunate own goal put United back ahead.

Dawber played a provider role for United’s other red-hot striker Fiona Worts, who held off Barry to grab the third goal for her side.

The scheduled Round 12 game between Brisbane Roar and Canberra United was postponed due to weather conditions.