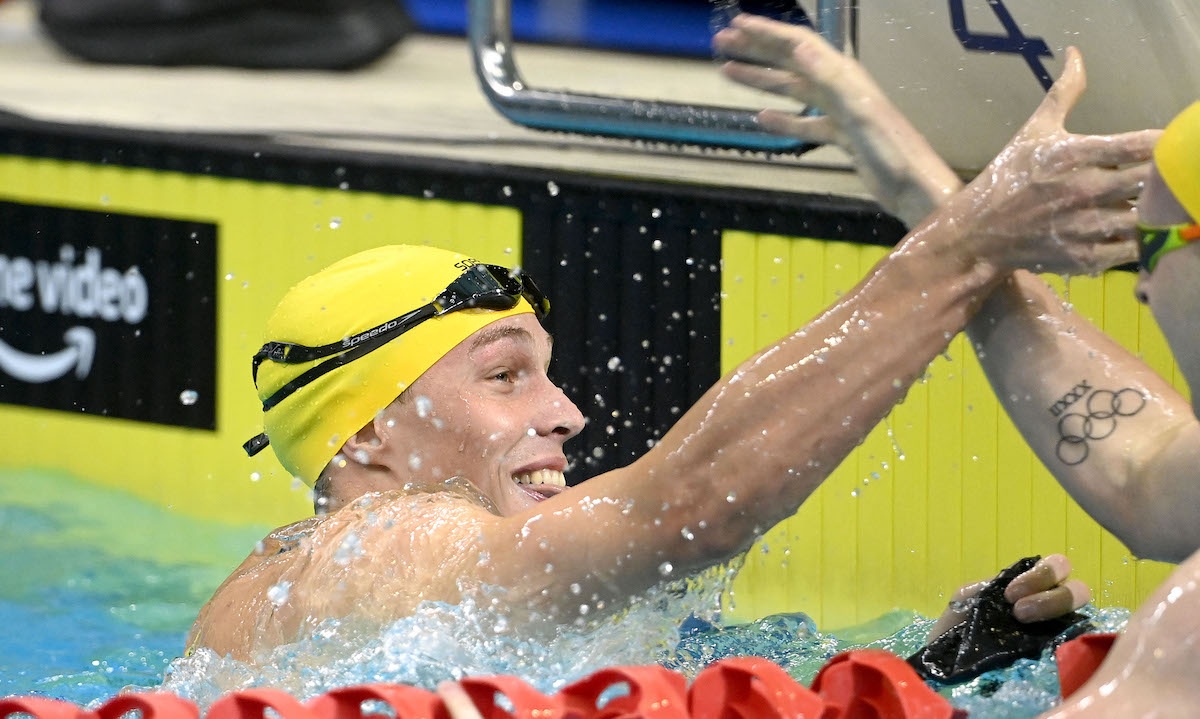 The 2022 Australian Swimming Championships had it all with redemption stories, records tumbling and new names coming to the fore ahead of a massive two months of international competition.

Shayna Jack returned to the Championships for the first time since 2019, Mack Horton made it back to the team, Zac Stubblety-Cook and Ariarne Titmus became fastest in the world in their events, and teenagers Mollie O'Callaghan and Isaac Cooper were shining bright as Australia's swimmers competed for places on the Dolphin team in 2022.

South Australia’s Aquatic and Leisure Centre again played host to the Championships, where Australia’s best swimmers dove in, in the hopes of qualifying for this year's international meets, which will come in short succession of each other.

First up will be the 2022 FINA World Championships in Budapest from June 17 to July 3, before the athletes travel to the Commonwealth Games in Birmingham from July 28.

While the action-packed competition spanned five days, here are some of the key storylines from the meet.

Ariarne Titmus made a statement when she dove in for the 400 Freestyle on Sunday night, sending American rival Katie Ledecky a message that the 'Terminator' is now the fastest in the world, ever.

Titmus, who won gold in the 400m Freestyle at the Olympics, was under World Record pace throughout her race and as early as the 200m mark, she was ahead by almost a body length.

While she hadn't tapered into the meet and wasn't expecting much for her 400m, a new-found freedom post-Olympics is Titmus' reasoning behind Sunday's result.

"I think that like the biggest thing since the Olympics, was that Dean (Boxall) said to me, 'you now have this like freedom, the pressure's off your back' and I've just loved swimming the past six months.

"And I think, going to training with no pressure and just enjoying the sport, I think it's underrated."

Her 200m was under world record pace through the first 100m, but she couldn't quite hold onto it in the closing stages.

Ariarne Titmus dives off the block in 200 mFreestyle Final on Friday night in Adelaide.

'I'm the fastest in the world, ever'

On Thursday evening, Zac Stubblety-Cook set a new World Record in the 200m Breaststroke, the event he won gold for at Tokyo 2020.

Stubblety-Cook came home in 2:05.95, 0.17 seconds under the previous record held by Anton Chupkov of Russia, the Australian becoming the first man in history to break the 2:06 barrier.

Speaking to media on Friday night, after qualifying in the 100m Breaststroke as well, Stubblety-Cook reflected on the previous night and his World Record in the 200m Breaststroke.

"I mean, it hasn't really sunk in, if I'm honest. Like, obviously, having the 100 today, I was definitely trying to shift my focus pretty quickly into that. So today and tomorrow, the rest of tonight and tomorrow is about settling back in and trying to offload a bit of emotion.

"I think I got to sleep, I was pretty wrecked by the time I got home, but once I got home, I slept pretty well. And then like, 4am, I was like all of a sudden awake again. It's been surreal.

On Night One of the Australian Swimming Championships, Shayna Jack's redemption journey came to a head as she attempted to swim herself back into the Dolphins' team after a two-year doping ban.

The freestyle specialist dove in for the 100m in a packed field, despite not featuring Tokyo gold medallist Emma McKeon or either of the Campbell sisters.

She finished second, behind teenage superstar Mollie O'Callaghan, with a time of 52.60. The pair are the top two swimmers in the world this year in this event.

Under 53 seconds, qualification for Worlds and the Commonwealth Games marked Jack's official return to the Australian team.

On the final night, the journey continued as Jack swum a stunning 50m Freestyle, taking the Australian Title in 24.14. It was the fastest time in the world this year.

Isaac Cooper, an 18 year old from Bundaberg, broke the Australian Record in the 50m Backstroke on Friday night.

Though qualification for this event is not automatic, Cooper certainly put himself in the best position to be selected for the team with a time of 22.44, 0.10 ahead of the previous record held by Ben Treffers.

The Rackley swimmer, coached by Damien Jones, then backed up his 50 Backstroke with another Australian Title in the 100m on the final night of competition.

Unfortunately, no other racers made the cut. Mitch Larkin, a mainstay of the team, missed out on individual qualification with a time of 54.30, and Josh Edwards-Smith, who won the 200m earlier in the week, swam 54.59.

Butterfly showdowns in the pool

Kyle Chalmers wasn't sure if he was going to swim this international season, then he decided to swim at the Australian Championships with the plan to go to the Commonwealth Games.

But, on returning to his home pool after some time away from the sport this season, Chalmers' fire inside has reignited and his performances in the 100m Butterfly and Freestyle have made such a statement the South Australian is re-thinking his World Championship plans.

Cody Simpson, left behind a singing career and returned to the pool only 18 months ago with a goal of going to Paris 2024. He looked solid at last year's championships, but this year he was inside qualifying times and on selectors' radars.

Cody Simpson dives in for the 50 Butterfly on Thursday night in Adelaide. Photo: Delly Carr/Swimming Australia

The pair came up against each other in the 50m and 100m butterfly and freestyle events at this meet and pushed each other for qualification times.

On Night One in the 100m Butterfly, Matt Temple an Olympic relay medallist took out the event in 51.50. Chalmers was ahead of Simpson by just .01 at the turn, but had the closing speed to take second in 51.67, with Simpson finishing dead on the qualifying time of 51.96.

Chalmers did nominate for the World Championships as well, but did not attend the team announcement, opting to return home to Port Lincoln for some time away after a big week. He will head to Budapest and Birmingham.

After qualifying third in the 100m Butterfly, Cody Simpson was selected on the Commonwealth Games team for Birmingham.

DUEL IN THE POOL RETURNS AS THE JEWEL FOR AUSTRALIAN SWIMMING

It was the dramatic finish to the final night of competition that no one expected, Sam Short, who had qualified in the 800m Freestyle for the World Championships, miscounted and didn't hear the bell for the final lap of his 1500m Freestyle race for a place on the Commonwealth Games squad.

Short stopped short, 'finishing' the race 100m metres early, before the lane steward rung the bell so loudly that Short realised he had to keep going.

Thankfully for Short, he was on the World Championships team for the 800m and all of Australia waited to see if the selectors would use their discretion and pick him on the Commonwealth Games team despite his mishap on Sunday night.

Luckily for Short, and Australia, he has a place on the team for Birmingham.

Kaylee McKeown took Australian Titles in both the 200m and 400 mIndividual Medley events in Adelaide.

Kaylee McKeown had another impressive Australian Swimming Championships, qualifying in four events, including the 100m Backstroke on Friday night (58.49).

Speaking to media after the race, McKeown felt there was a way to go with her 100m ahead of the first international meet since her gold medal win in Tokyo.

"Happy? I don't know about that, I think it's just a bit of practice under my belt.

"I haven't been tapered coming into this meet, so I didn't really expect the speed to be there as much as I did in the 400m.

"I feel like aerobically I'm fit, I just need to get that top-end speed back, which I know is going to come along in the next four weeks."

A talking point across the meet with many athletes such as McKeown, and young guns like Mollie O'Callaghan, qualifying across multiple events, was what would their World Championship programs be? Given there are just four weeks until the meet and the Commonwealth Games follow just three weeks after.

McKeown is set to only compete in half of the events she qualified in for Budapest, because the event's program doesn't line up. Her team will have to work out how much she can handle, with relays to be factored in as well.

"So basically, considering what I make it in for the rest of the week, the World Championships will look like the 100, 200 Backstroke - if I make the 200m Backstroke - not the 400IM just because it's before the medley relay, and maybe not so much the 200IM, just because of the fact it's the same day as the 100 back.

"So, unfortunately it doesn't line with me, same as what it did at the Olympics, which like I said is unfortunate, but then Comm Games come around, the 400IM's on the first day, hence why I'm practising here.

"You know, it's a 400IM into a 100 back, so you know it's a rough double, but I'm looking forward to challenging myself and hopefully making that happen."